THz Time-Domain Spectroscopy or THz-TDS is a technique that allows one to measure a complex THz electric field, i.e. amplitude and phase. It is now a widely used tool to investigate materials parameters (complex refractive index, conductivity, mobility and others) in the far infrared spectral range (1 THz = 4 meV = 300 µm) without the need of using Kramers-Kronig transformations. To achieve this, the beam from a mode-locked laser is split in two parts:

(1) a generation beam used to produce THz pulses via a photoconductive antenna or optical rectification in a nonlinear crystal, and

(2) a gating beam used to detect the THz electric field via a photoconductive antenna or Pockels effect in a nonlinear crystal.

A photoconductive antenna consists, at its core, two biased electrodes deposited on a semiconductor (e.g. GaAs). By exciting the gap between the DC biased electrodes, the semiconductor becomes conductive on a very short time scale generating a current pulse that radiates a picosecond long quasi-monocycle electric-field transient in the far infrared.

To collect the generated THz radiation, a set of 90° off-axis parabolic mirrors are used. The studied sample is placed at the focal point after the second parabolic mirror. The transmitted THz pulses are then collected and focused on the detection system and overlaps with the gating beam.

In the presence of THz electric field, the electro-optic crystal (e.g. ZnTe) becomes birefringent inducing a change in the polarization of the gating beam (measured by an optical balance composed of quarter-wave plate, a Wollaston prism and photodiode balance). This change is directly proportional to the amplitude of the THz electric field (Pockels effect).  By moving a delay stage on the gating beam path, it is possible to sample the THz electric field amplitude at different time delays and then build the THz Time-Domain waveform. The spectrum is obtained via a Fourier transform. 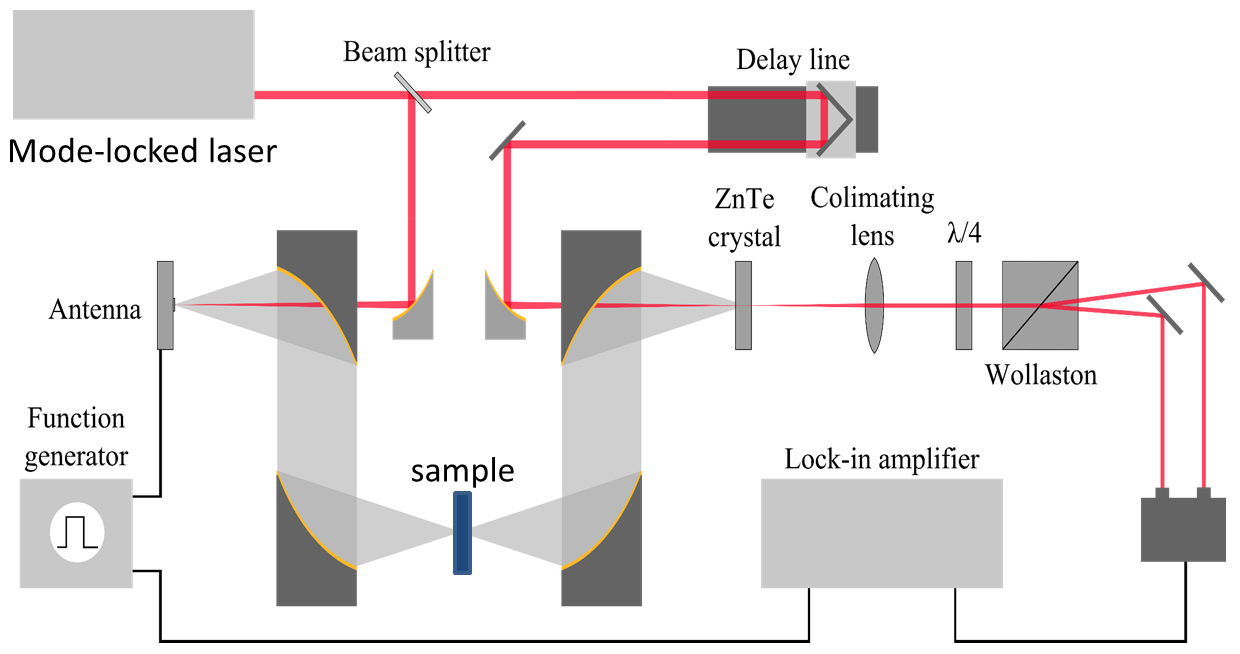