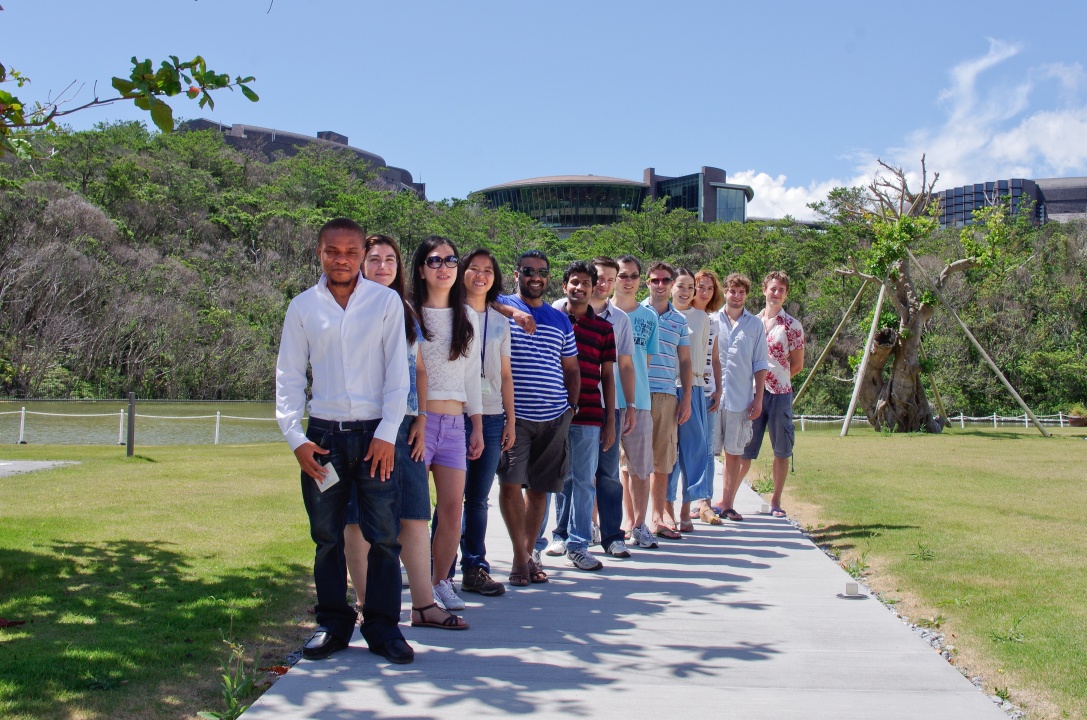 Over the past few decades, techniques in ultrafast spectroscopy have opened the doors to study processes in materials with femtosecond (~10-15 second) temporal resolution, as well as study light matter interactions in the extremely nonlinear regime (~109 J/s). With these techniques, one can investigate, for example, chemical reactions unfold within picoseconds and make highly nonlinear optical devices for applications in telecommunications. In the Femtosecond Spectroscopy Unit, we use these techniques of ultrafast spectroscopy towards developing new instrumentation, and towards applications in Condensed Matter Physics, Surface Science, Materials Science and Biology. Below we present a brief report of the advances made and techniques developed by the Femtosecond Spectroscopy Unit in each of these topics.

Terahertz radiation (1012 Hz) covers an important part of the electromagnetic spectrum between high speed electronnics (1 GHz) and below far-infrared optical radiation (1014 Hz). This region of the spectrum has important applications in pharmaceuticals through vibrational spectroscopy of molecules, biomedical applications through imaging of cancer cells and living tissues, and security industry through non-destructive, see-through imaging of concealed objects. However, the lack of good sources and detectors in this region of the spectrum has hindered large scale applications.

Typical sources of THz radiation today use complicated nonlinear optics with high power lasers, or small antenna structures where laser alignment is complex. Here, we have pushed the limits on a novel type of antenna structure (Intedigitated Antennas) in combination with short ultrafast pulses (~15 fs) to generate broadband terahertz (THz) radiation. The THz optical system was constructed in FY2011 with a demonstration that a bandwidth of up to 10 THz was measurable.

In FY2012, we have pushed the limits of this technology significantly to now generate beyond 25 THz. We have utilized large area interdigitated photoconductive antennas (Figure 1, inset) for high E-field THz generation, and a high repetition rate, high power oscillator laser. THz E-field calculations show that we are generating towards (and possibly beyond) 1 kV/cm of broadband THz radiation. The large bandwidth has been confirmed using a standard absorption sample, a thin PTFE tape to show a clear resonance at 15 THz, Figure 2.

Figure 1: (Left) Spectrum of the Ultrabroadband THz Pulse showing a capability beyond 25 THz. (Right) A measurement of the absorption peaks in Teflon at ~15 THz to demonstrate the spectroscopic capability of the system.

Graphene quantum dots have attracted a lot of attention lately due to their unusual energy spectrum that depends strongly on the quantum dot size, shape and edge topology. It has been shown theoretically [1-2] that triangular quantum dots with zigzag type of edges exhibit a number of highly degenerate zero-energy states that are half filled at low temperatures and lead to a non-zero ground state magnetic moment (Figure 2a). In contrast, quantum dots with armchair type of edges exhibit a well-defined band gap and a semiconductor-like behavior. Experimentally though this behavior is still to be observed, partly because of the difficulties in controlling the shape and type of edges during manufacturing. Our work aims at understanding the optical properties of these structures and possibly suggesting ways of optically identifying the presence of these zero-energy states in a distribution of quantum dots of different edges and sizes.

Figure 2: Energy spectrum for a triangular quantum dot with N = 10 atoms per side and (a) zigzag, and (b) armchair edges.

For our calculations we used the standard tight-binding model for graphene [3] to study its energy spectrum and eigenstates for different quantum dot sizes and edges and we calculated the oscillator strength for all possible transitions. Because of the triangular symmetry, we classified all eigenstates into three groups depending on their symmetry under a 120 degree rotation. We found that for circularly polarized light only transitions between states of specific symmetry are allowed.

Metamaterials are a novel approach to light matter interaction, where artificially created nanoscale metal-dielectric structures allow us to engineer the interaction of light and matter. Over the past decade, this has lead to exotic ideas like negative index of reflraction, left handed light, and equally exotic applications like invisibility and imaging beyond the diffraction limit. Recent work by members of our group had demonstrated a new application of metamaterials - a device for all-optical communication, capable of over terabits per second communication speeds, which was two orders of magnitude faster than previous demonstrations.
Beyond this first demonstration, significant challenges remain in the practical utility of such a device - namely integration with other photonic devices and optical fibers, and optimization of device geometery to reduce energy consumption.
In this project, we investigated the capabilities of this elliptical negative index metamaterial (eNIM) device using Finite Difference Time Domain simulations. Previous device structures consisted of just a tri-layered Ag-Si-Ag structure, perforated with a two-dimensional periodic array of holes (Figure 3a). Previous pump-probe experiments have shown that the device had the potential to serve as an all-optical picosecond switch due to the existence of negative index resonances in the near-infrared (Figure 3b). We use simulation to explore the geometric and physical origins of the resonances. By adjusting the anisotropy of the two-dimensional array of holes we show that the switching ratio improves by 2 dB.

Figure 3: (A) Unit cell of the metamaterial device with the Ag-Si-Ag trilayer structure and the elliptical hole. (B) The two negative index resonances in the near-infrared that are modulated to allow for all-optical communication.
We also considered devices with more than three layers, and we analyzed the performance of the device in the regime of 1) weak interaction and 2) strong interaction between the layers. We concluded that adding a second weakly coupled device increases the switching ratio by approximately 1 dB.
In conclusion, we predicted that through geometric optimization of the device structure, the device can provide picosecond switching of 3.3 dB for approximately 75 W of power, versus the 300W of power previously required.

Semiconductor photocatalysis, particularly using visible light, offers promising applications such as fuel production via hydrogen generation, and water and air purification [1]. However, most of the common photocatalysts, such as titanium dioxide (TiO2), make inefficient use of the solar spectrum due to large optical bandgaps in the UV. Recently, efforts have been directed towards increasing the visible light absorption of photocatalysts like TiO2 via doping [2]. However, typically this increased visible light absorption results in decreased reactivity, potentially due to dopant-induced scattering events that reduce photocarrier conductivity, mobility and lifetime. Optical Pump/THz Probe Spectroscopy is ideally suited to study the sub-picosecond dynamics of photoexcited carriers and their transient conductivity.

In this project, we photoexcite Nitrogen doped TiO2 (N-TiO2) films with ultrafast pulses in the UV and Visible, and then probe the photoexcited samples with sub-picosecond THz pulses to study the transient photoconductivity of the carriers. We observe clear differences in the picosecond dynamics of the photogenerated carriers as we vary nitrogen concentration and excitation wavelength. These differences are expected to directly impact the photocatalytic ability, and thus provide insight into engineering the efficiencies of these films for future applications. 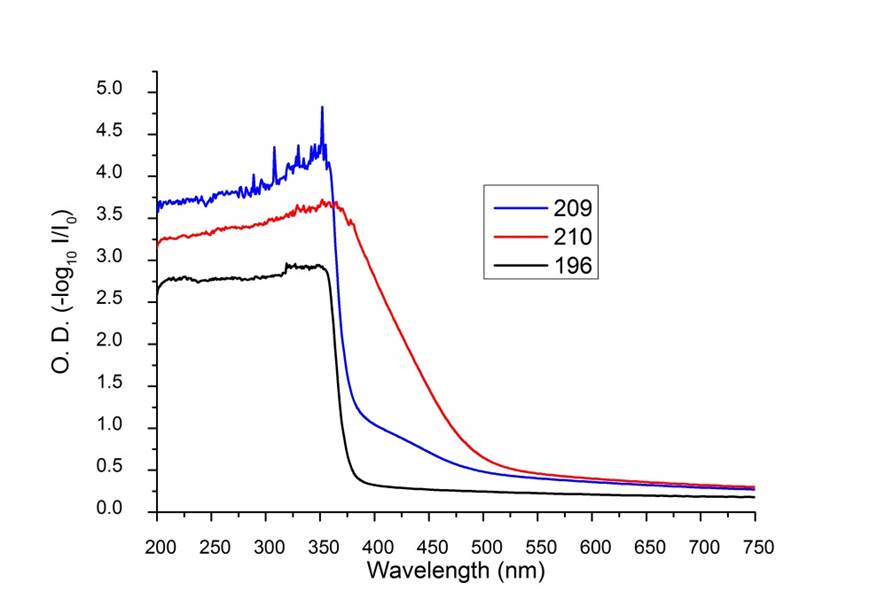 Figure 4: Absorption Spectrum of the three samples (Undoped - 196, Doped 209 & 210) showing increased absorption in the visible due to different types of nitrogen doping.

In collaboration with the Parkin Group at Univ. College London, we have grown samples of TiO2 films on quartz substrates by CVD with varying amounts of nitrogen doping. With UV-Vis absorption measurements we confirm increased absorption in the visible due to nitrogen doping (Figure 4). We excite our samples with ~ 100 fs pulses of 480 nm (absorption onset for doped samples) to 330 nm (above bandgap excitation), and then probe with a time-delayed THz pulse. We observe this despite the increased visible absorption, the N-TiO2 samples demonstrate decreased carrier mobility and faster relaxation rates, which directly impact their photocatalytic ability.

In conclusion, UV-Vis Pump/THz probe provides a new tool to directly access the ultrafast, microscopic dynamics of charge carriers in visible light photocatalysts, like N-TiO2 films. These results provide fundamental insight into the future engineering of these materials for more efficient use of the solar spectrum for a variety of applications.

Recently developments in materials and nanotechnology have allowed for the development of biocompatible materials that can be introduced into the body and externally controlled via physical, chemical or biological stimulus. The high power of femtosecond pulses in particular allows for specific control of biomaterials by using their nonlinear optical properties.

In FY2012, the Femtosecond Spectroscopy Unit, in collaboration with the Wickens Unit at OIST has been developing a novel technique for controlling biocompatible drug delivery systems using femtosecond pulses.

One goal of the Femtosecond Spectroscopy Unit is to combine the time resolution of ultrafast spectroscopy technique with the spatial resolution of LEEM/PEEM microscopy. The photo-emitted electrons generated by the femtosecond laser will provide time resolution at ultrafast timescale, when combined with the LEEM/PEEM, it enables visualization of ultrafast dynamic processes, such as charge carrier dynamics during photexcitation and spin dynamics in magnetic nanomaterials, at the femtosecond temporal resolution and at nanometer spatial resolution. The possibly of imaging ultrafast dynamics in nanomaterials advances our understanding of the fundamental working principles behind the emerging nanotechnologies.

In February 2013 (the end of FY2012), the installation and testing of the LEEM/PEEM system was completed. The LEEM/PEEM system is in the process of being coupled to the femtosecond laser system and this will be done in the coming fiscal years. In the meantime, in FY2012, efforts were directed towards the initial preparation of samples, in particular, of 2D materials like Graphene, hexagonal-Boron Nitride and Molybdenum Disulfide in the LEEM/PEEM.

By the end of March 2013 (end of FY2012), we have also setup an inert atmosphere glovebox system in our laboratory. The glovebox system enables transfer and exchange of environmental sensitive test material among different units and collaborators. It facilitates investigation of advanced materials which cannot be prepared in the LEEM/PEEM system.