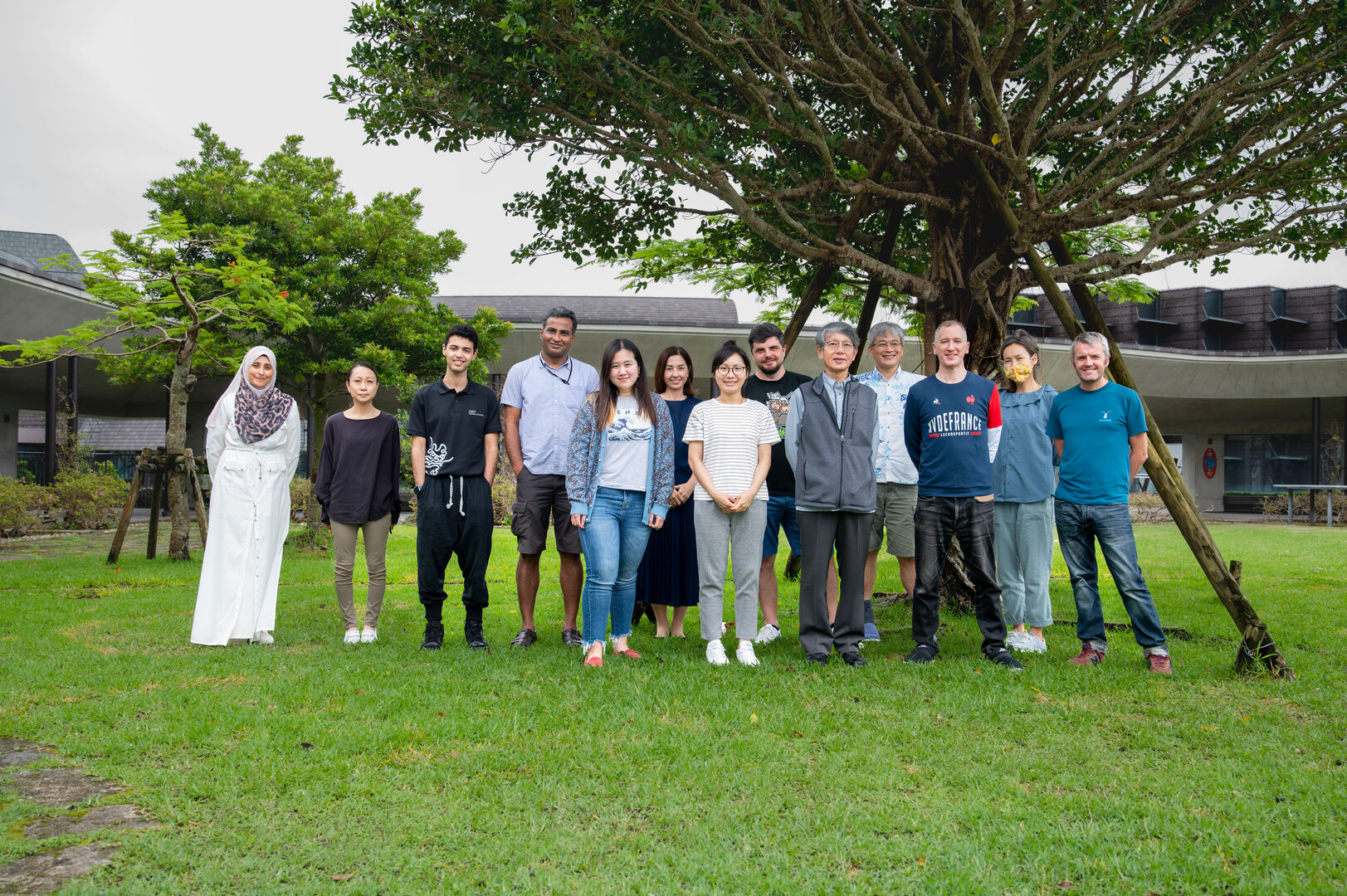 Synapses play pivotal roles in switching neuronal circuits thereby regulating a variety of brain functions. Such synaptic activities are supported and regulated by synaptic molecules and their interactions. Once homeostatic synaptic molecular balance is distorted in a brain region, local synapses can become dysfunctional and neuronal circuitry computation can be impaired. It is likely that neurological symptoms such as motor, sensory or cognitive defects associated with Alzheimer’s disease (AD) or Parkinson’s disease (PD) arise from local synaptic dysfunctions and their pathological phenotypes largely depend upon the physiological roles of the neuronal circuitry involved. Thus, these neurological symptoms can in principle be rescued if a right target and molecular-physiological mechanisms underlying synaptic dysfunctions are clarified. An important approach to this end is to build a synaptic model platform, on which functional effects of various molecular manipulations can be tested according to the disease etiology. As such, we have established a slice model of the calyx of Held in the rodent brainstem, where molecular-functional mechanisms can be manipulated at both presynaptic and postsynaptic sites. In this model, we have addressed synaptic dysfunctional mechanisms associated with PD (Eguchi et al, 2017) and AD (Hori et al, 2022) and proposed a measure to rescue them. α-Synuclein accumulation for PD model and soluble tau accumulation in AD model were simulated by infusing these proteins directly into presynaptic terminals. In both cases, the main target of the toxicity was identified as vesicle endocytosis, which is normally supported by a monomeric GTPase dynamin. Dynamin is originally discovered as a microtubule (MT)-binding protein, and we found that α-synuclein or tau newly assembles tubulins into MTs. We therefore hypothesized that newly assembled MTs in presynaptic terminals sequester cytosolic dynamins, thereby blocking endocytosis. If endocytosis is blocked, vesicles can no longer be recycled to be reused for neurotransmission, therefore high-frequency transmitter release cannot be maintained. We tested this hypothesis by synthesizing a small peptide that can inhibit MT-dynamin binding. Out of screenings, we found a peptide, which we call PHDP5, can inhibit the MT-dynamin binding, and when co-infused with tau alleviated impaired vesicle endocytosis and transmitter release. Thus, this peptide can potentially serve as a therapeutic tool for both PD and AD.

Recombinant wild-type (WT) monomeric human tau (h-tau) protein and its deletion mutant lacking the MT binding region (del-MTBD) were produced using E coli expression system (Fig 1A). WT h-tau assembled MTs, whereas del-MTBD did not (Fig 1B). At the calyx of Held in brainstem slices, WT h-tau was infused into presynaptic whole cell pipette from a tube install in the pipette at time 0 (Fig 2A, B). As tau in presynaptic pipette diffused into the presynaptic terminal, EPSCs recorded from postsynaptic neurons underwent a rundown and reached ~20 % of the initial size in 30 min (Fig 2A). Intra-terminal infusion of del-MTBD in the same way had no effect. The rundown of EPSCs by tau was stronger when stimulation frequency was higher (Fig 2B). The MT stabilizing reagent taxol assembled MTs in vitro (Fig 1B) and mimicked the frequency-dependent effect of tau at the calyx of Held.

To determine the target of tau toxicity, we tested the effect of tau on exo-endocytosis at the calyx of Held, using capacitance measurements (Fig 3). When tau was loaded by diffusion from presynaptic pipette, endocytic capacitance changes first became slower.  Thereafter, exocytic magnitude underwent a decline. These results indicate that the primary target of tau is vesicle endocytosis. As a result of endocytic slowing vesicle recycling is slowed, thereby decreasing exocytosis. 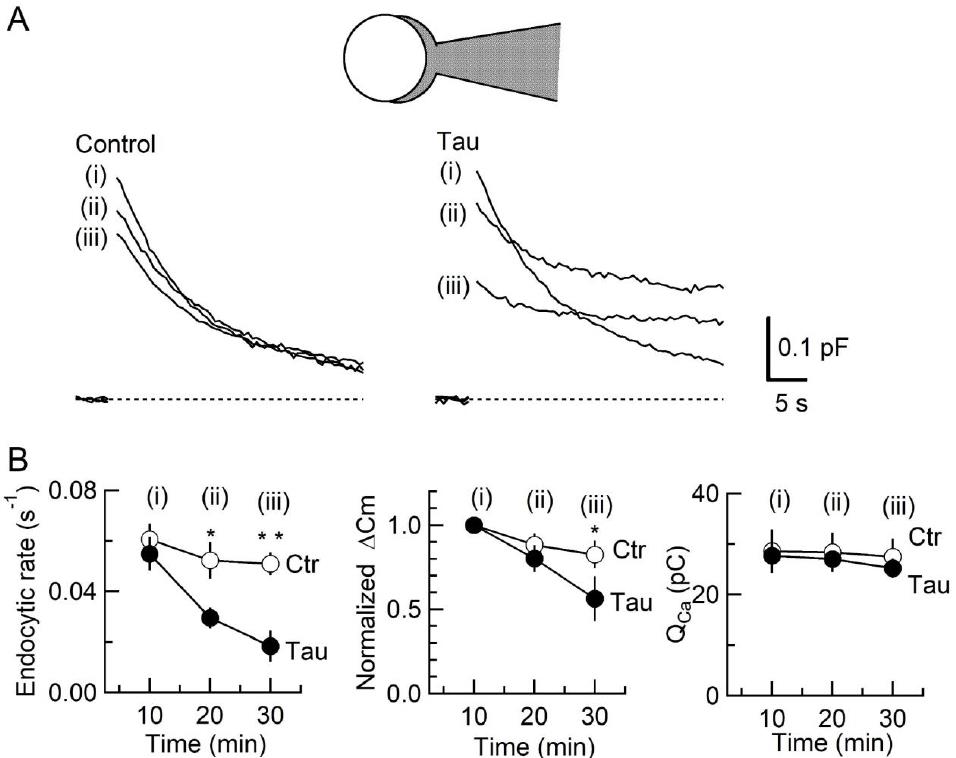 Results in Fig 2 suggest that MT assembly is likely involved in the toxic effect of tau like α-synuclein toxicity in PD model (Eguchi et al, 2017). We then tested whether the tau-toxicity is counteracted by the MT disassembler reagent nocodazole. Nocodazole above 20 μM maximally block MT assembly in vitro (Fig 4A). Co-loading of nocodazole (20 μM) with tau into calyceal terminals prevented endocytic impairments by tau (Fig 4B) and EPSC rundown by tau (Fig 4C). Thus, MT disassembler can be a potential therapeutic candidate for symptoms associated with AD as well as PD. 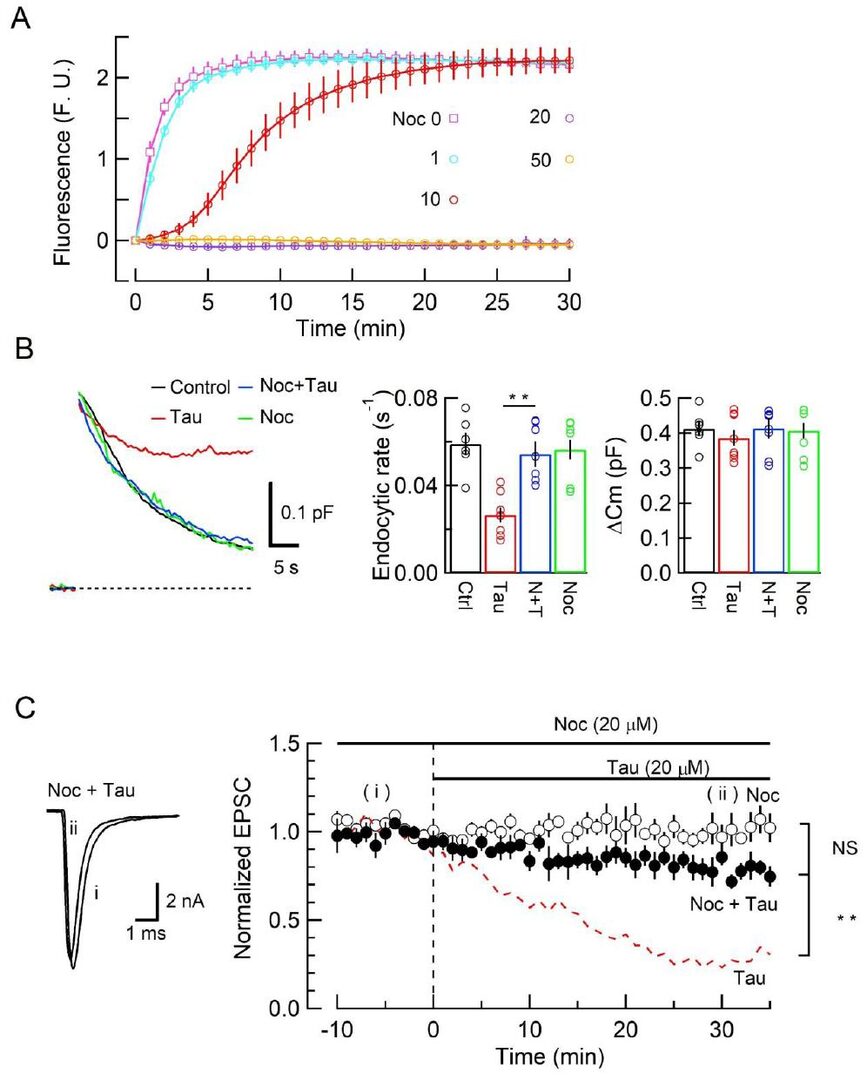 A remaining fundamental question is why assembled MTs interfere with vesicle endocytosis. Vesicle endocytosis highly depends upon the GTPase dynamins and we noticed that dynamin was originally discovered as a MT-binding protein. We then raised a hypothesis that MTs newly assembled by accumulated tau might sequester cytosolic dynamins, thereby blocking endocytosis.
If this hypothesis holds, fraction of bound form dynamin should increase in presynaptic terminals loaded with tau. We then performed immunocytochemical analysis using anti-dynamin antibody together with h-tau antibody and tubulin antibody (Fig 5). In these experiments, tau was loaded from whole-cell pipette and loaded terminals were chemically fixed and permeabilized with a detergent to allow soluble small molecules to wash out from the terminals to gain signal to noise ratio of bound-form molecular detection. 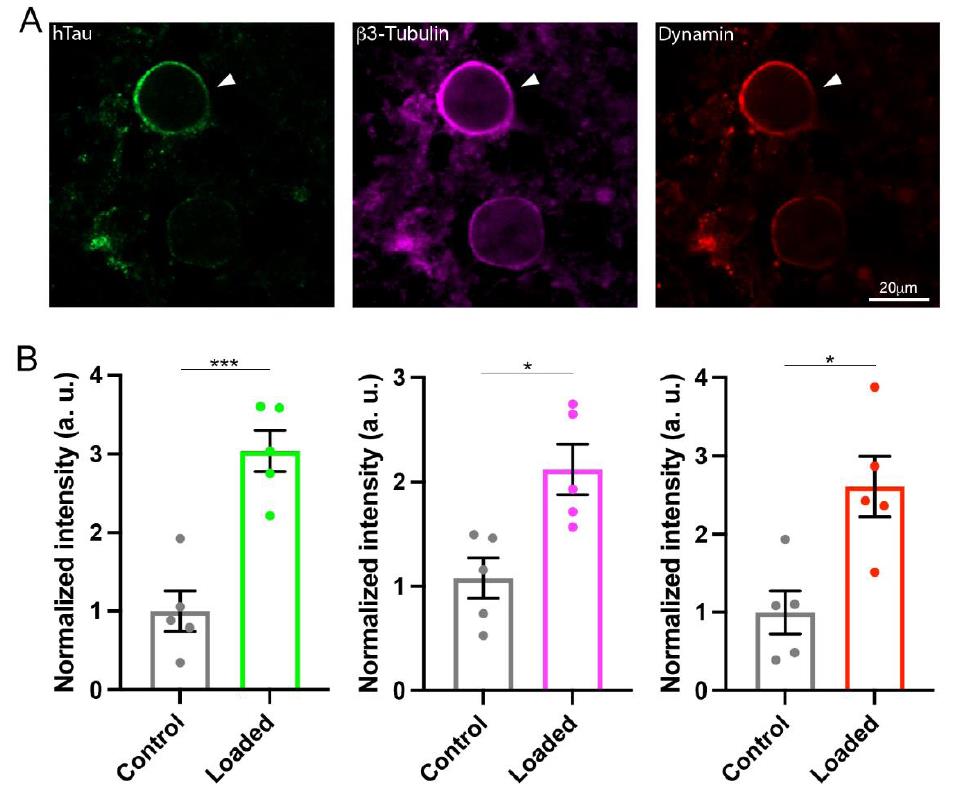 Calyceal terminals loaded with h-tau was identified using h-tau antibody (Fig 5A). Tubulin staining in the such a terminal revealed an increase in MT (Fig 5A, B). Furthermore, bound fraction of dynamin significantly increased in these terminals.
Super-resolution confocal optics analysis of such terminals indicated co-localizations of dynamin with MTs and tau (Fig 6). 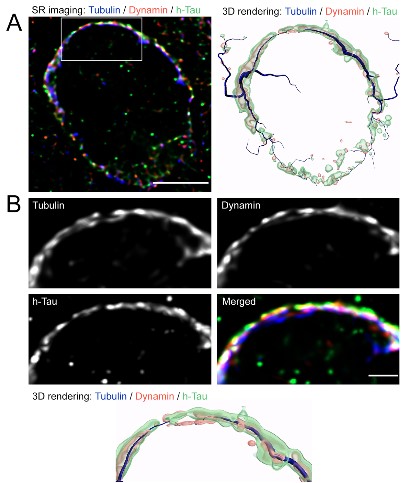 Since intra-terminal loading of h-tau induced MT-formation and cytosolic dynamin reduction, interference of MT-dynamin binding could rescue vesicle endocytosis and exocytic transmitter release impaired by h-tau. Since the MT-dynamin binding site is unidentified, we synthesized 24 small peptides corresponding to the different regions of Pleckstrin-homology (PH) domain and proline-rich domain (PRD) of dynamin 1.  Among them a dodeca peptide corresponding to a part of PHD significantly inhibited MT-dynamin 1 binding (Fig 7A).  This peptide, which we named PHDP5, rescued endocytosis (Fig 7B) and neurotransmission (Fig 7C) impaired by tau-loading, when co-loaded into calyceal terminals with tau.  Control scramble peptide had no such effect. 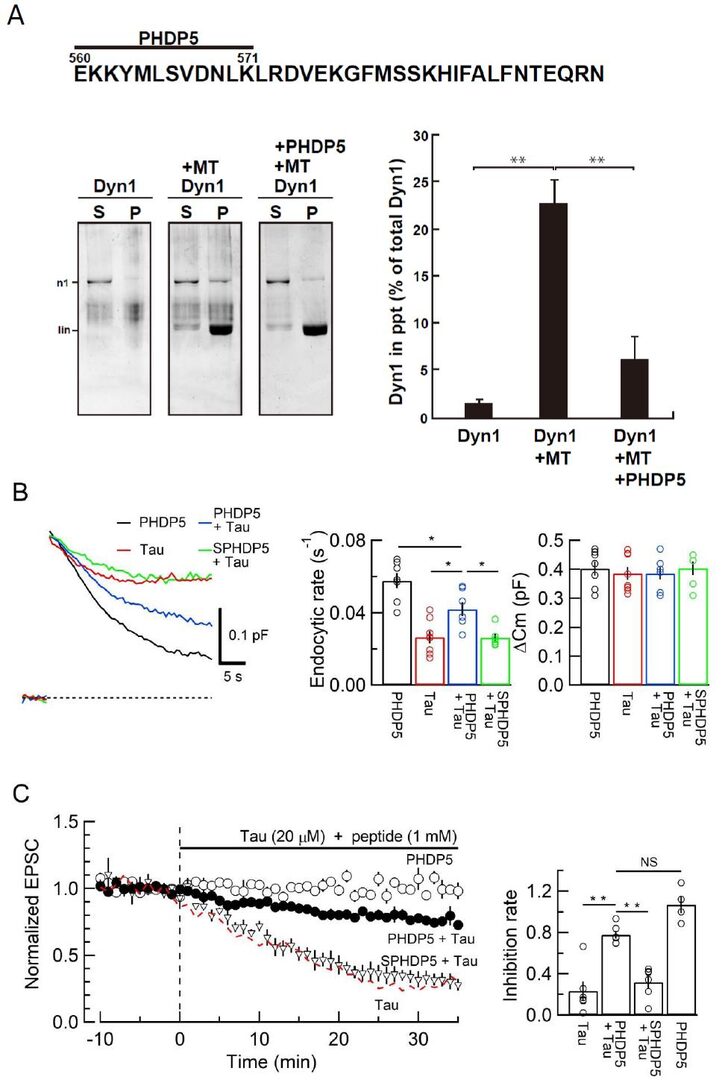 Thus, PHDP5 might be utilized for AD therapy as well as for PD therapy. The next step is to construct this analogue, which can permeate blood brain barrier (BBB). We have already synthesized 6 such peptides to be tested for their BBB permeability and conservation of MT-dynamin binding inhibition capability. The second step is to test potencies of such therapeutic candidates in rescuing impaired memory in AD model mice.