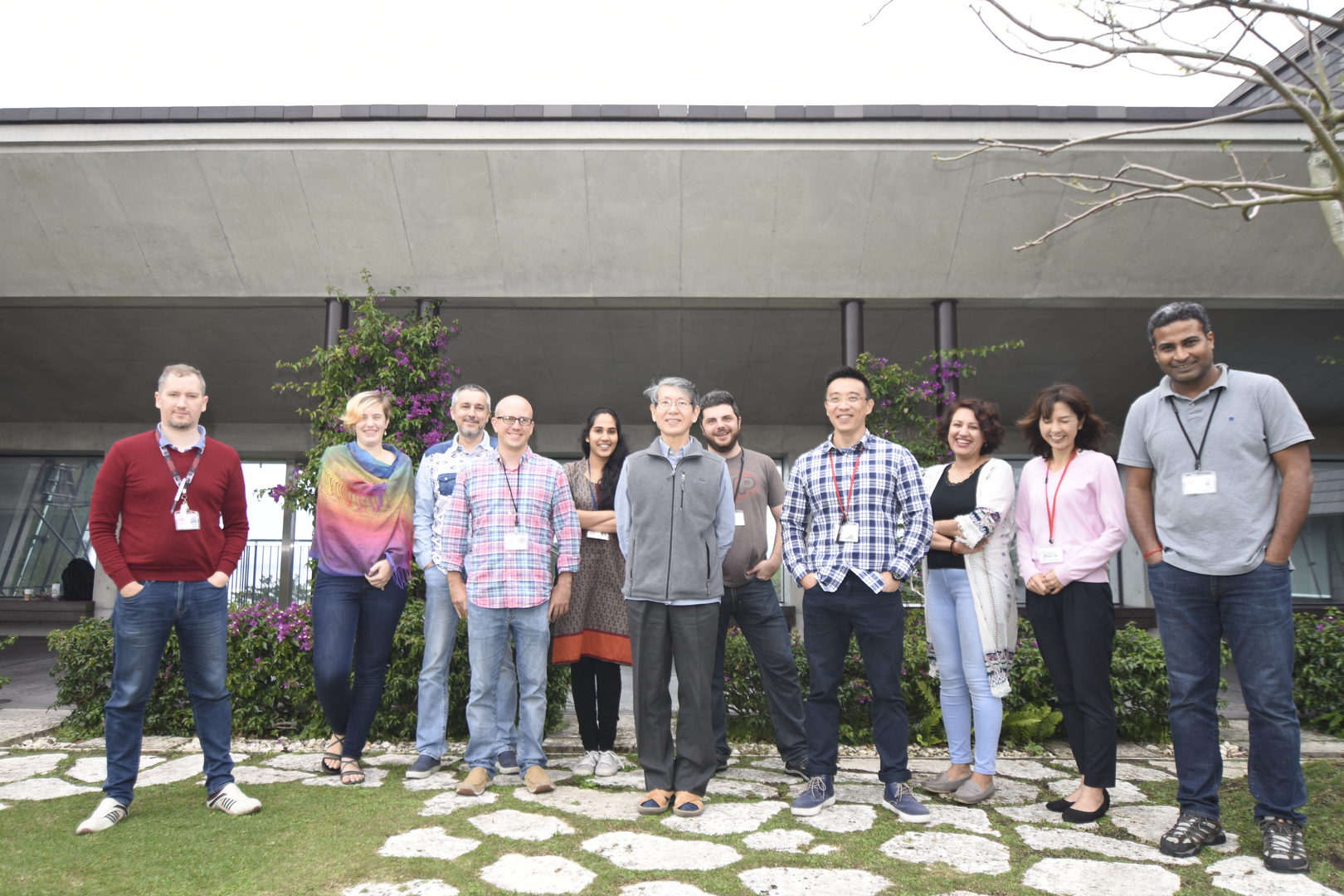 In the presynaptic terminal, neurotransmitters are taken up from cytosol into synaptic vesicles and released by vesicle exocytosis. After exocytosis, vesicle membranes are retrieved by endocytosis and vesicles are refilled with neurotransmitter to be reused for the next round of neurotransmission. These vesicle recycling/reuse steps are crucial for continuous synaptic transmission required for brain functions. However, little is known about the kinetics of vesicle movements or the rate of neurotransmitter uptake. Using our newly developed glutamatergic giant synapse preparation in culture (Dimitrov et al, 2016 J Neurosci), we monitored movements of synaptic vesicles in real time, after loading them with fluorescent probes, such as quantum dot, during endocytosis (Guillaud et al, 2017 eLife). These experiments have revealed trajectories and speed of dynamically moving vesicles in presynaptic terminals.
At the excitatory synapse, calyx of Held, the vesicle refilling rate of glutamate was previously estimated using caged glutamate photolysis (Hori & Takahashi, 2012 Neuron). We applied this method to inhibitory neuronal pairs in cerebellar slices, and estimated vesicle refilling rate of GABA using caged GABA. We found that GABA refilling into vesicles takes ~5 times more time than glutamate. Such a slow refilling time can be a limiting factor for vesicle reuse after a sustained high frequency exocytosis occurring at cerebellar inhibitory synapses. Indeed, the recovery rate of inhibitory neurotransmission from activity-dependent short-term depression coincided with the rate of GABA refilling into vesicles estimated from GABA uncaging experiments. When presynaptic cytosolic GABA concentration was changed between 1-10 mM, the rate of recovery of neurotransmission from depression ran parallel with that of GABA refilling into vesicles. Thus, neurotransmitter uptake plays a critical role in the maintenance of high frequency neurotransmission, particularly at inhibitory synapses (Yamashita et al, 2018, Cell Reports).
Vesicle recycling is initiated by endocytosis. We found that the presynaptic protein α-synuclein, when over-loaded into presynaptic terminals from whole-cell pipettes, inhibits vesicle endocytosis (Eguchi et al, 2017 J Neurosci). This blocking effect could be rescued by co-loading of the microtubule depolymerizing drug nocodazole, or a photo-switchable colchicine derivative PST-1 in a reversible manner, suggesting that new assembly of microtubules impairs endocytosis. Endocytic inhibition by α-synuclein impaired high-fidelity high-frequency neurotransmission that is essential for a variety of neuronal functions. Since abnormal elevation of α-synuclein is known to underlie Parkinson’s disease, present results provide a synaptic model for the neuronal disease.

We characterized vesicle dynamics in the calyceal terminals in culture.  In resting terminals, labeled vesicles moved with irregular speeds and various trajectories.

After fixation of the tissue with aldehyde, the SV mobility dropped down to 1/8 in diffusion coefficient, ensuring a good S/N ratio for SV imaging. Using IMARIS software, we analyzed SV movements quantitatively. SVs traveling a longer distance generally had a higher maximal velocity, measured for a 1s step within 30s tracking. 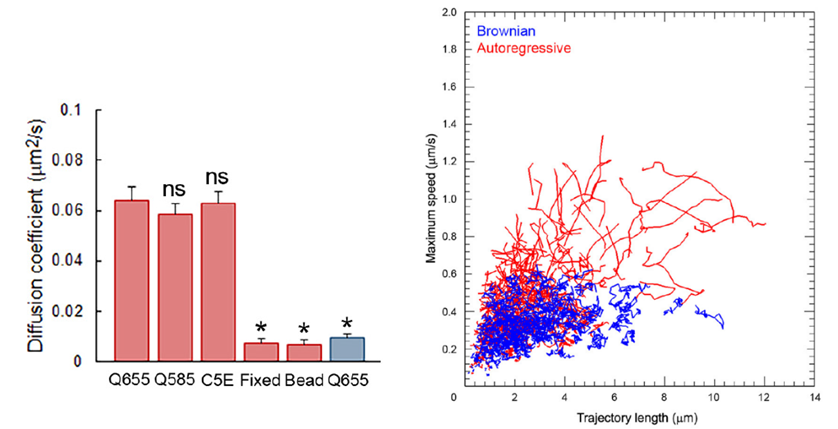 Compared with calyceal terminals the SV mobility was 2-fold lower in hippocampal presynaptic boutons of similar size to calyceal swellings. 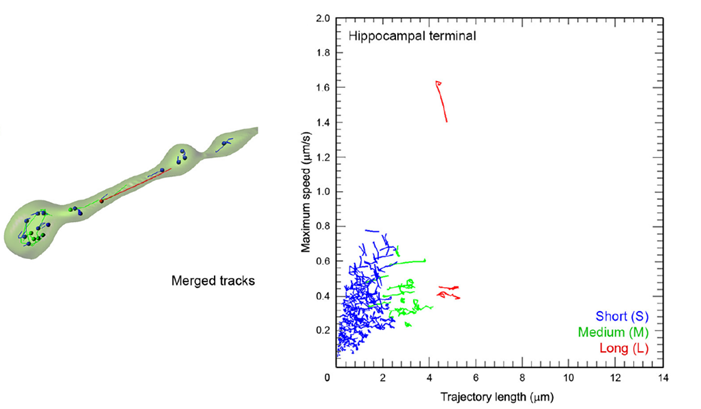 Synaptic vesicles express vesicular glutamate transporters (VGLUTs), which uptake neurotransmitter glutamate from cytosol into vesicles.  VGLUT1-venus and VGLUT2-venus were transfected into separate CN neurons. VGLUT1-venus SVs showed higher mobility than VGLUT2-venus SVs.  Furthermore, track length and max speed were higher and SVs with active directional modality was more frequently observed in the former SVs. These results suggest that SV protein VGLUT signatures can differentiate SV mobility. Since the VGLUT1 binding partner protein endophilin does not bind to VGLUT2, it remains to be seen whether endophilin is involved in differentiating SV traffic characteristics. 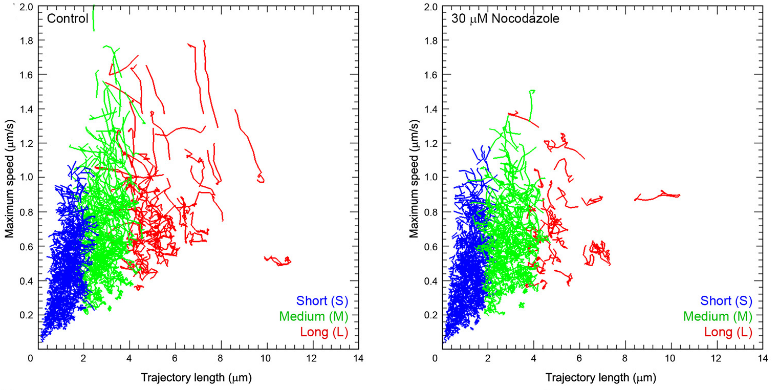 When vesicle exocytosis was triggered by bath-application of 65 mM [KCl] solution, many SVs underwent exocytosis and resulted in a reduction of long and fast SV movements, as well as an overall reduction in the mobility of remaining SVs.  Hypertonic sucrose solution had no effect on SV mobility, but reduced directional modality of SVs. Electrical stimulation at 1 Hz had no appreciable effect.
Much remains open for SV movements in response to stimulation. It would be important to monitor small movements below the detection level of the present method, possibly using single vesicle tracking at scarcely loaded terminals.  It is also essential to label the release site and real-time monitor exocytosis in response to stimulation.

α-Synuclein is an endogenous protein normally attached to vesicular or plasma membranes in the nerve terminal. Excess α-synuclein is known to accompany α-synucleinopathy including Parkinson’s disease (PD).  We have loaded wild type α-synuclein into calyx terminals in acute slices and found that it slows endocytosis with no immediate effect on exocytosis or ICa.  The α-synuclein mutants A30P or A53T, found in the synuclein aggregates Lewy body in PD patients, had no such effect. 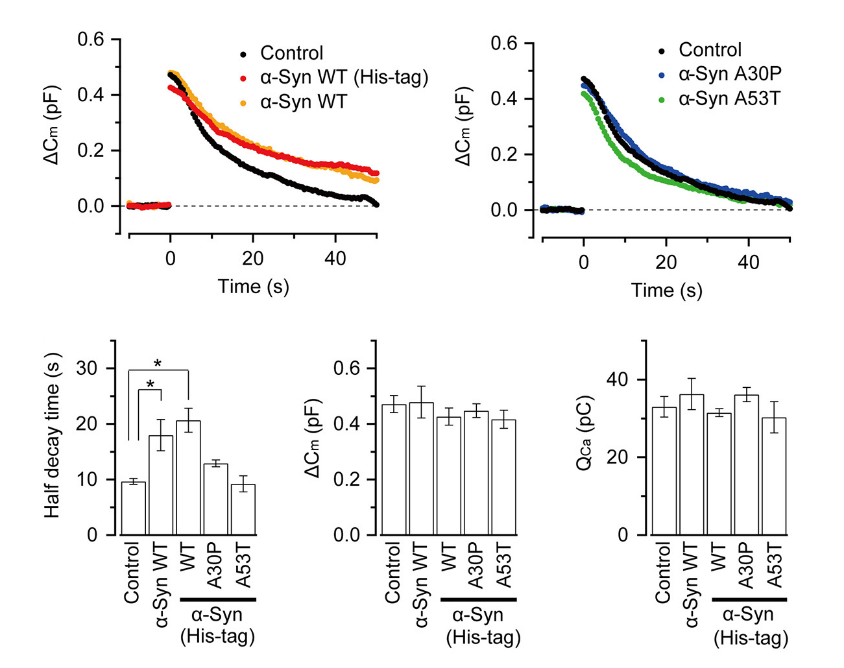 This inhibitory effect of α-synuclein on vesicle endocytosis was rescued by co-loading the microtubules depolymerizing drug nocodazole in nerve terminals. 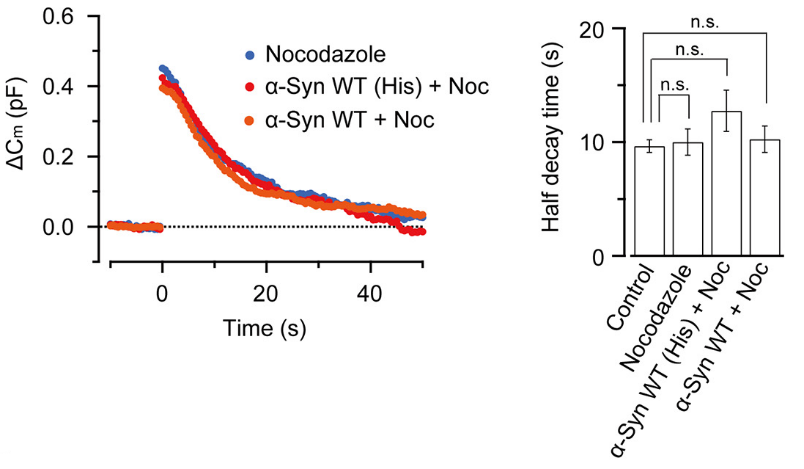 Furthermore, a photo-switchable microtubules depolymerizer photostatin co-loaded with α-synuclein rescued the latter effect under 390 nm illumination, but this rescuing effect was lost at 510 nm illumination in a reversible manner.

Nocodazole rescued all these defects caused by α-synuclein.

These results suggest that microtubules over-assembly underlie the loss of function caused by α-synuclein loading.

In inhibitory nerve terminals, transmitter GABA is taken up into vesicles from cytosol after vesicles are retrieved from plasma membrane. This refilling process is essential for the maintenance of synaptic transmission by vesicle recycling. Experimentally, during whole-cell recording from presynaptic terminals, cytosolic GABA can be washed out by a pipette solution.  Subsequently, GABA in vesicles are lost by passive leak and vesicle recycling. This causes a time-dependent rundown of IPSC amplitudes at many synapses, including those between cerebellar basket cell (B)- Purkinje cell (P) synapse.

These interpretations assume that vesicular GABA content has no influence on the efficacy of vesicular exocytosis. However, there is a report that vesicular GABA content affects the efficacy of vesicle exocytosis.  We tested this possibility by assaying exocytosis using membrane capacitance measurements from Purkinje cell axon terminals in culture. In this method, vesicle exocytosis is monitored as a capacitive jump following Ca2+ currents evoked by a depolarizing pulse of different duration (1-50 ms) between terminals dialyzed with 0 mM or 5 mM GABA.  The exocytic capacitance change (ΔCm) was essentially the same between these terminals. Thus, vesicular GABA content has no effect on the number of vesicles undergoing exocytosis in response to stimulation.

Having confirmed that vesicular GABA content is directly reflected in the IPSC amplitude, we replaced, by whole-cell dialysis, the endogenous GABA by caged a caged compound DPNI-GABA from which GABA is released in response to an UV light pulse. 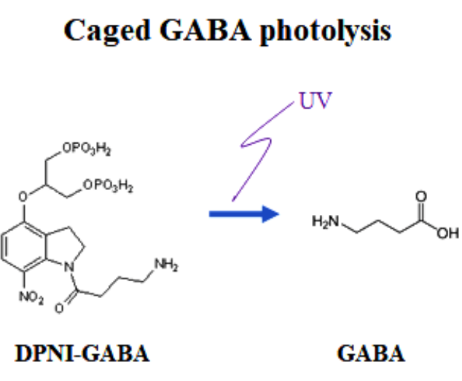 After IPSCs ran-down to a low steady level, we gave an UV pulse, thereby photo-releasing GABA into cytosol. This caused an increase in the IPSC amplitude of various magnitudes, depending upon the GABA photo-released from the caged compound. There was a positive correlation between the magnitude and initial slope of the IPSC recovery.  By comparing the recovery magnitude after uncaging with that after loading of GABA at given concentrations (see above), we estimated the vesicular filling rate of GABA vs GABA concentrations reached by uncaging.

From these results we estimate that the maximal rate of vesicular GABA uptake is 40 s in time constant at physiological temperature (PT).  This is ~ 5 times slower than that we previously estimated for the vesicular glutamate uptake rate (time constant, 7 s at PT; Hori & Takahashi, 2012 Neuron).  The vesicle uptake rate was naturally faster at higher cytosolic GABA concentrations with a Km of 5 mM as previously reported in studies using isolated vesicles.
Given that the vesicular uptake rate of GABA is slow, we examined whether it might limit the rate of vesicle reuse by recycling.  When we stimulated a bipolar cell at 50 Hz for 2 min, IPSCs underwent a short term depression (STD) to a very low level. We then switched stimulation to 0.1 Hz and observed a single exponential recovery of IPSCs. 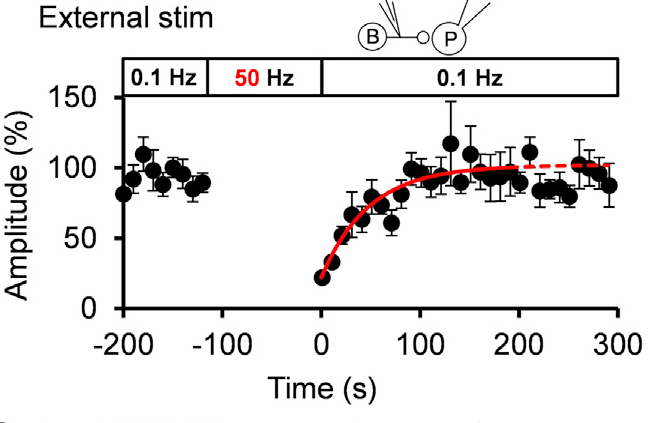 When we loaded GABA into presynaptic basket cells at different concentration (1-10 mM), we found that the recovery rate of IPSCs became faster at higher GABA concentrations. When we induced STD using a more physiological stimulation frequency of 10 Hz, recovery after STD took two exponential time courses, with a slower rate of recovery being similar to that after STD induced by 50 Hz stimulation. 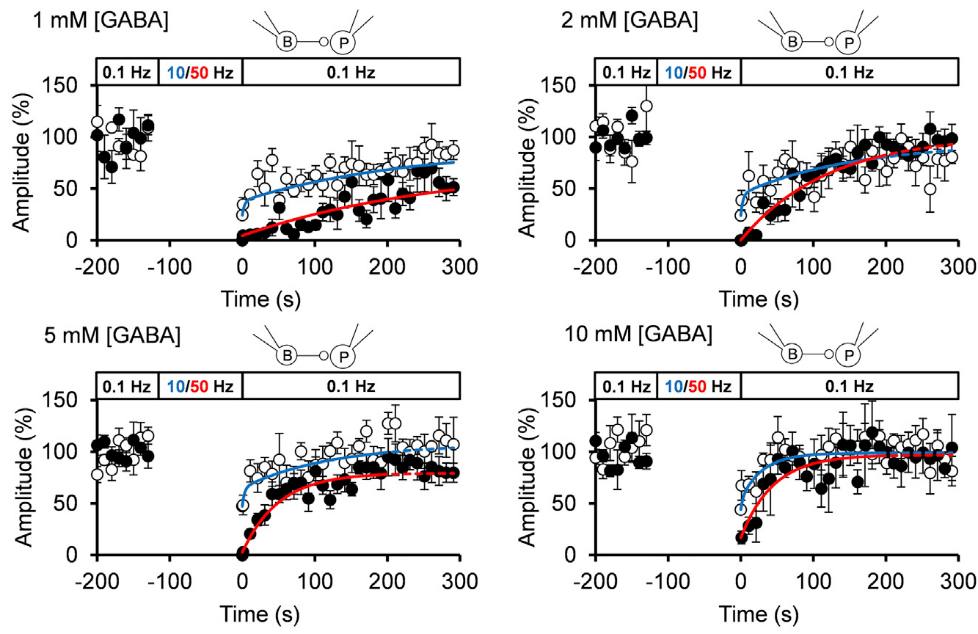 The IPSC recovery rates from STD were clearly dependent upon cytosolic GABA concentrations loaded, and the GABA concentration dependence as well as the absolute rates of recovery nearly coincided with those of GABA uptake into vesicles. 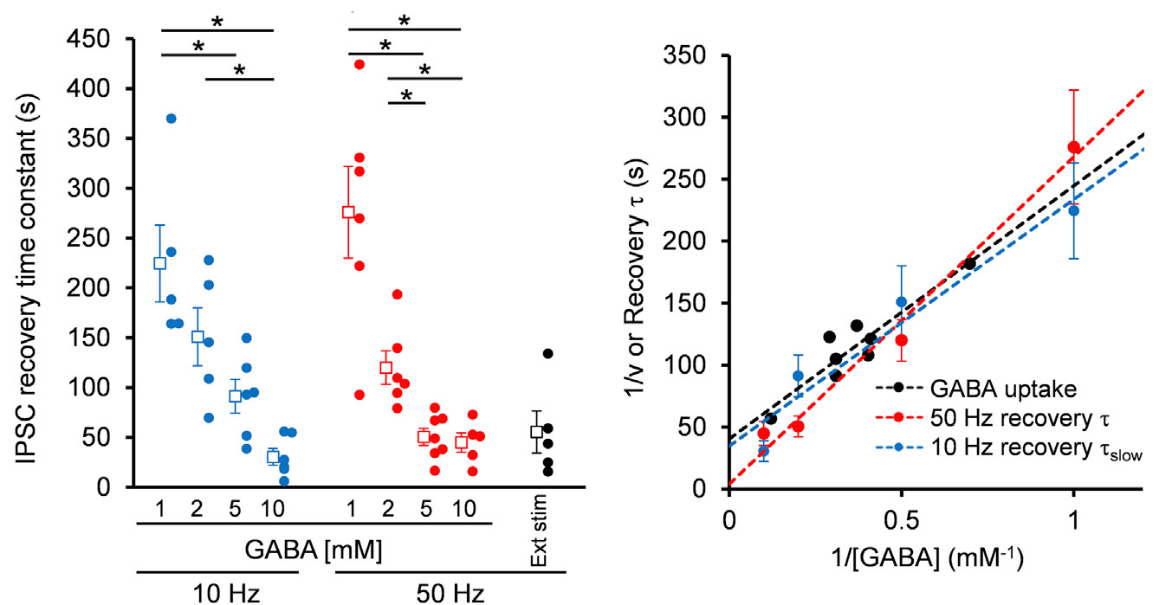 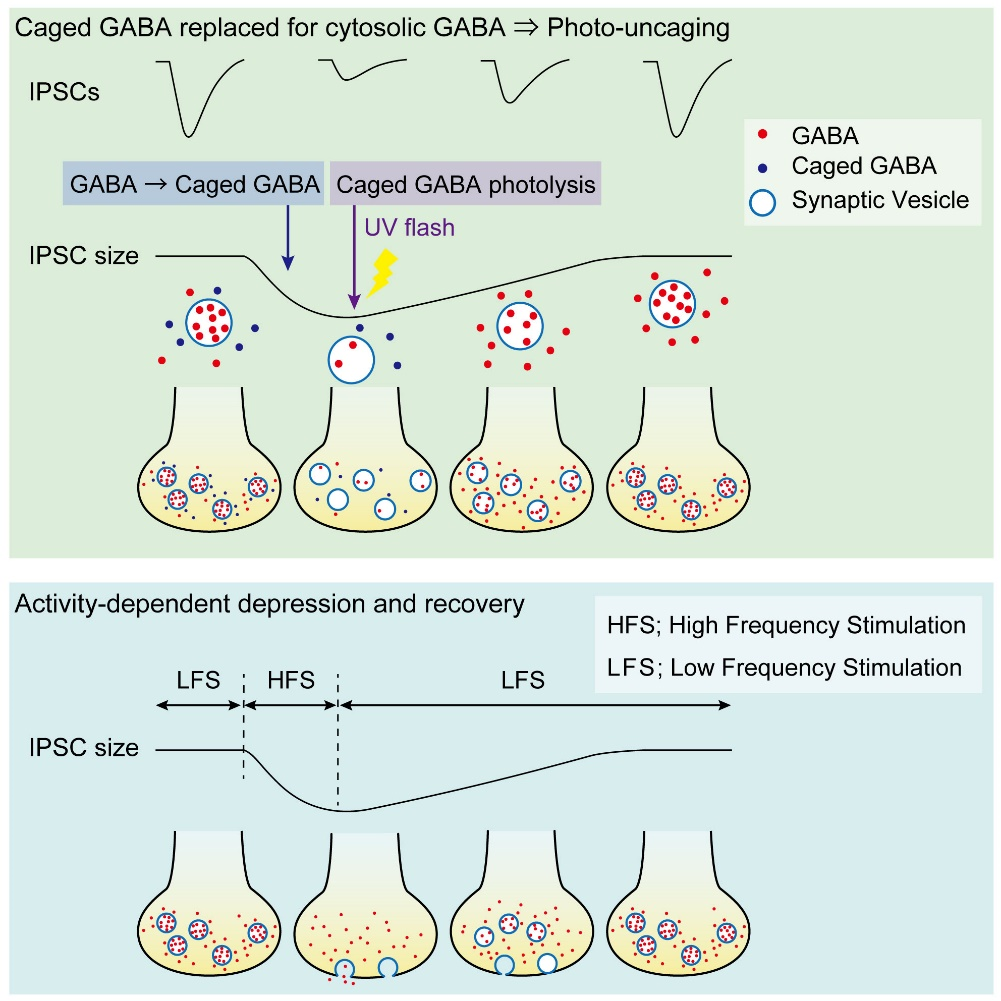