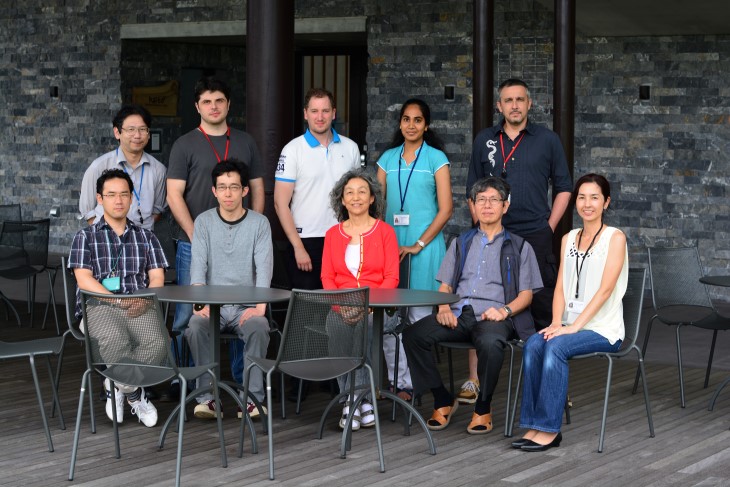 In the neuronal system, dynamic changes of synaptic strength play critical roles in switching functional neuronal circuits. Regarding synaptic strength, compared with postsynaptic mechanisms much less is known for presynaptic mechanisms, primarily because of small nerve terminal structures preventing applications of electrophysiological and imaging techniques. The calyx of Held is a giant glutamatergic nerve terminal visually identified in the mammalian auditory brainstem slices. This fast relay synapse undergoes dramatic  developmental changes in its structure, functional properties and molecular compositions during the second postnatal (P) week, when rodents start to hear sound at P10-12. By applying molecular, imaging and patch-clamp techniques to this synapse of developing rodents, we aim at elucidating presynaptic regulatory mechanisms underlying synaptic transmission.  Our progress in the fiscal year 2012 is as follows:

After exocytic release of transmitter, synaptic vesicles are retrieved by endocytosis and recycled to be reused.  At glutamatergic excitatory synappses imaging studies using fluorescence indicators have revealed different types of vesicle endocytosis with different kinetics, ranging from subsecond to tens of seconds.  It has been argued that fast endocytosis and recycling are required for small synapses with limited number of releasable vesicles.  Despite the wealth of knowledge on the endocytic kinetics, little is known for the time required for vesicles to be refilled with neurotransmitter.  This information is important because empty vesicles do not contribute to neurotransmission.  In isolated or reconstructed vesicles, the uptake time constant of the neurotransmitter glutamate goes beyond several minutes.  This time course is far too slow to account for the recovery of synaptic transmission after depletion of releasable vesicles.  Clearly, the original kinetics of glutamate uptake into vesicles is distorted during the procedure of vesicle isolation or reconstruction.
It is therefore desirable if one can measure the time of vesicular glutamate uptake in situ.   We challenged this problem using the calyx of Held presynaptic terminal.  In this terminal, whole cell wash out of cytosolic glutamate leads to a depletion of glutamate in vesicles, because of vesicle recycling combined with a passive leakage.     Glutamate depletion from vesicles results in a reduction of the frequency and mean amplitude of spontaneous miniature, i.e., vesicular, EPSCs and mean amplitude of nerve-evoked EPSCs (Ishikawa et al, 2002 Neuron).  In contrast, injection of glutamate into the terminal increases vesicular glutamate content and the size of EPSCs.  To address the question on the kinetics of vesicle refilling with glutamate, we introduced the caged glutamate compound MNI-glutamate (2-10 mM) into the terminal.

When glutamate was washed out from the terminal, the EPSC amplitude declined to a low level (<20%, Fig 1A).   Application of an UV flash light (1s) caused a recovery of EPSCs to the original amplitude (>95%).  This recovery was completely abolished in the presence of bafilomycin in the bath solution (Fig 1B).  Bafilomycin blocks acidification of vesicles by vacuolar type H+-ATPase that is required for glutamate uptake with vesicular glutamate transporters (VGLUTs).   This recovery was not associated with changes in the membrane capacitance (Fig 1C), suggesting that glutamate uncaging had no effect on exocytosis of vesicles.  Furthermore, glutamate uncaging increased the frequency and amplitude of miniature EPSCs (Fig 1D), suggesting that vesicles were refilled with glutamate photo-released from the MNI compound. 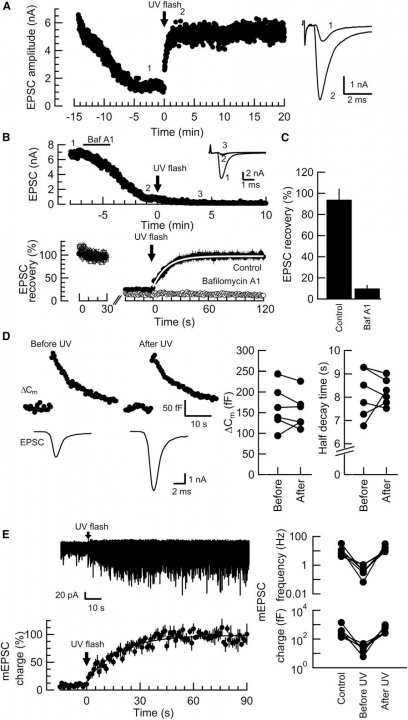 From these data we analyzed the kinetics of glutamate uptake.  To gain information as to the glutamate concentration raised by glutamate uncaging, we loaded given concentration of glutamate into calyces and measured the EPSC amplitude (Fig 2A).  We then uncaged glutamate from the MNI compound at different concentrations (2-10 mM, Fig 2B).  By normalizing the maximal EPSC amplitude between glutamate loading and MNI-glutamate uncaging, we obtained the relationship between the time constant of EPSC recovery and glutamate concentrations (Fig 2C).  Lineweaver-Burk plot analysis of these data indicated that the maximal glutamate uptake rate (Vmax) was 15 sec and the glutamate affinity of the transporter (Km) was 0.9 mM.  The latter value is similar to what have been reported for VGLUT1 and VGLUT2. 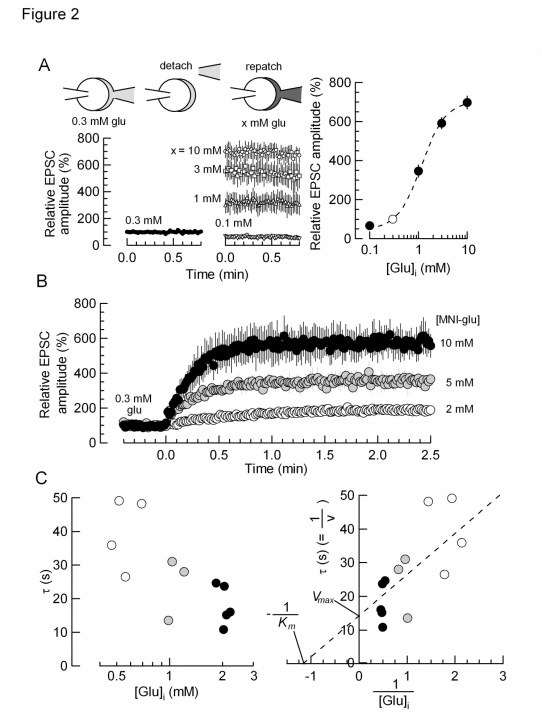 The 15s time constant measured for glutamate refilling into vesicles is fast enough to fill up vesicles in the CME pathway (Fig 3), but it is too slow to fill vesicles undergoing fast recycling pathways such as the “kiss-and-run” fusion flicker that is thought to have subsecond time constant.  In order to contribute to synaptic transmission, vesicles after recycling through fast pathways must wait for them refilled with transmitter before reused.  In fact, it has been estimated that “kiss-and run” vesicles are reused only after 23 sec.  This time course is not much different from that of CME.  Thus, it remains to be re-examined whether the fast recycling mechanisms have physiological significance. 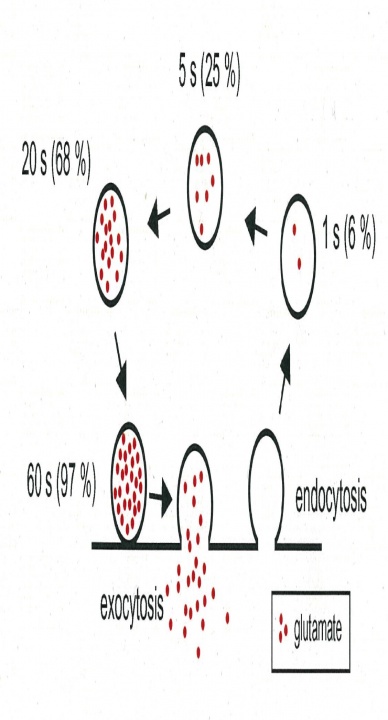 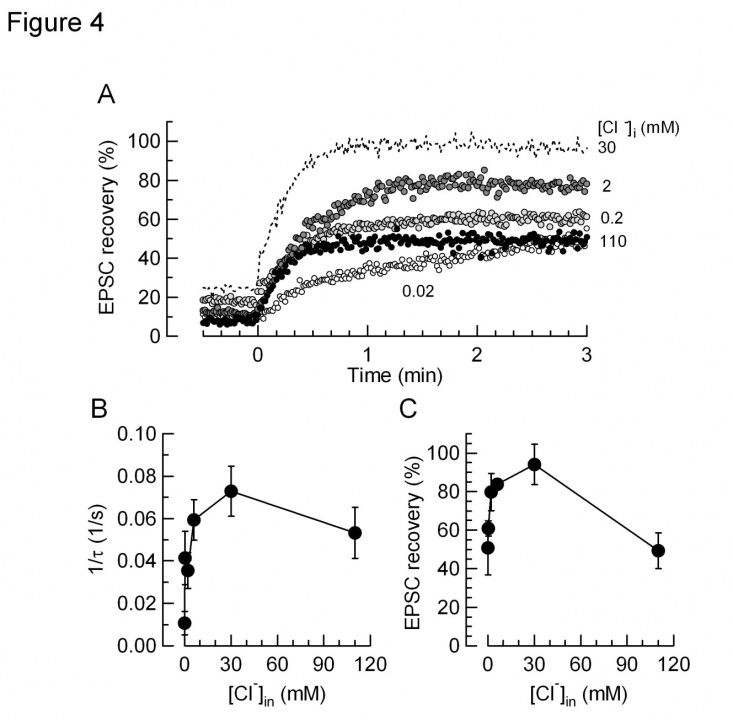 Rho-kinase plays diverse roles in cell motility. During neuronal development, Rho-kinase is involved in neuronal migration, and in neurite outgrowth and retraction. Rho-kinase remains highly expressed in mature neurons, but its physiological roles are poorly understood. Taoufiq et al report that Rho-kinase plays a key role in the synaptic vesicle recycling system in presynaptic terminals.  Vesicles consumed by excessive exocytosis are replenished by accelerating vesicle endocytosis via a retrograde feedback mechanism involving nitric oxide released from postsynaptic cells.  This homeostatic control system involves presynaptic cyclic GMP-dependent protein kinase (PKG) and a plasma membrane phospholipid, phosphatidylinositol-4,5-bisphophate (PIP2) (Eguchi et al, 2012 Neuron). Taoufiq et al found that application of a Rho-kinase inhibitor, a PKG inhibitor or both, reduced the PIP2 content in Wistar rat brainstem synaptosomes to a similar extent.  Likewise, application of the Rho-kinase inhibitor into the calyx of Held presynaptic terminal slowed vesicle endocytosis to the same degree as did application of the PKG inhibitor. This endocytic slowing effect of the Rho-kinase inhibitor was cancelled by co-application of PIP2 into the terminal. By contrast, a RhoA activator increased the PIP2 content and reversed the effect of the PKG inhibitor in brainstem synaptosomes. The RhoA activator, when loaded into calyceal terminals, also rescued the endocytic slowing effect of the PKG inhibitor. Furthermore, intra-terminal loading of anti-PIP2 antibody slowed vesicle endocytosis and blocked the rescuing effect of the RhoA activator. It is concluded that Rho-kinase links presynaptic PKG activity to PIP2 synthesis, thereby controlling the homeostatic balance of vesicle exocytosis and endocytosis in nerve terminals.