The paradox of the third tier: how do corals react to extreme environmental conditions? 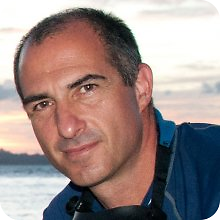 The paradox of the third tier: how do corals react to extreme environmental conditions?

This ability supports the hypothesis that scleractinian corals have survived through the ions even during unfavorable conditions for calcification.  This physiological and morphological trait may shed light on the evolutionary mechanisms that allows these calcifying organisms to survive the third tier of mass extinctions. We show that incubation of two coral species under acidifying conditions invokes tissue-specific apoptosis (programmed cell death) that leads to disassociation of polyps from coenosarc (connective tissue) and the breakdown of the latter, resulting in the loss of colonial form and of the calcareous skeleton. Following reintroduction of the remaining solitary polyps to a more basic pH (8.2), both coral species examined (Pocillopora damicornis and Oculina patagonica) reformed coenosarc and initiated calcification.  Our data shows that apoptosis is initiated in the polyps, and once disassociation between polyp and coenosarc terminates, it subsides.  We show that corals respond to severe and rapid environmental changes using a controlled pathway governed by programmed cell death mechanisms. These results may provide a mechanistic explanation for several key evolutionary phenomena: (i) repeated loss/gain of coloniality in corals over the ions (ii) reported “programmed release” of single polyps including or devoid of skeleton following environmental stress, and (iii) patterns of survival of mass extinctions events demonstrated by corals over the geological time scales, thus providing new insight into nature's discontinuities (i.e. the third tier of the paradox of the tiers) S J Gould (1985).