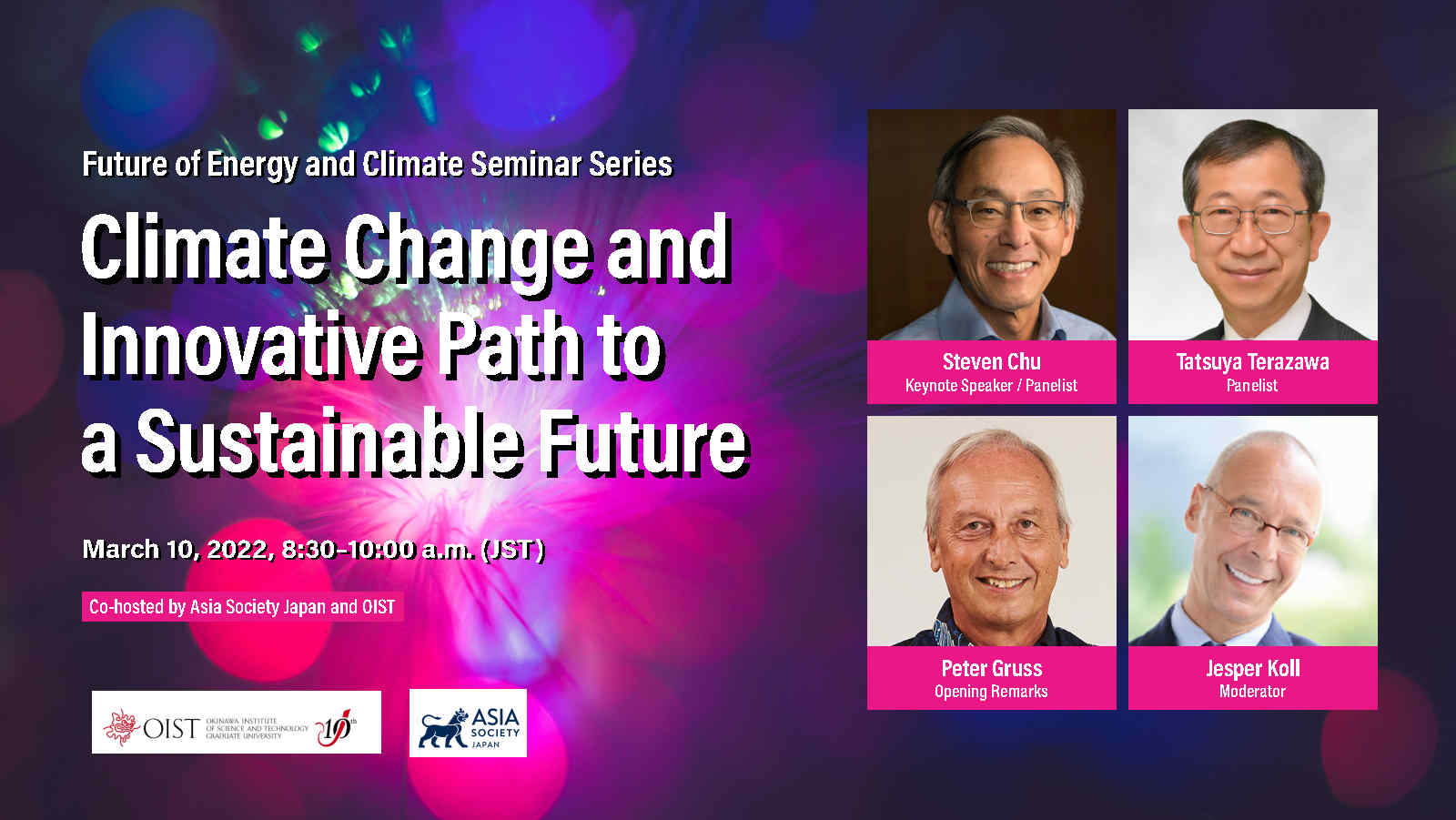 In the kickoff seminar, we are honored to have Dr. Steven Chu, Nobel Laureate in Physics (1997) and former US Secretary of Energy (Jan 2009 – April 2013), as the keynote speaker (online). Dr. Chu currently is William R. Kenan Jr. Professor and Professor of Molecular and Cellular Physiology, Medical School, Stanford University.

Dr. Chu’s speech is titled “Climate Change and Innovative Path to a Sustainable Future” and he will speak on advanced scientific research and technologies which can help the world tackle the current energy and climate challenges, sustainable energy sources, and fusion power and its impact on the future of our energy and the climate.

The keynote speech will be followed by a panel discussion with Dr. Chu, Mr. Tatsuya Terazawa, Chairman & CEO of Institute of Energy Economics Japan (IEEJ), and Dr. Peter Gruss, President & CEO of OIST. The session will be moderated by Mr. Jesper Koll, Global Ambassador, Monex Group Japan. Their discussion will focus mainly on “Sustainable energy sources and future technologies as solutions for energy and climate challenges”.

We hope you will be able to join us.

Steven Chu is the William R. Kenan, Jr., Professor of Physics and Professor of Molecular & Cellular Physiology in the Medical School at Stanford University. He has published over 280 papers in atomic and polymer physics, biophysics, biology, bio-imaging, batteries, and other energy technologies. He holds 15 patents and an additional 9 patent disclosures or filings since 2015.

Dr. Chu was the 12th U.S. Secretary of Energy from January 2009 until the end of April 2013. As the first scientist to hold a Cabinet position and the longest-serving Energy Secretary, he recruited outstanding scientists and engineers into the Department of Energy. He began several initiatives including ARPA-E (Advanced Research Projects Agency-Energy), the Energy Innovation Hubs, and was personally tasked by President Obama to assist BP in stopping the Deepwater Horizon oil leak.

Prior to his cabinet post, he was director of the Lawrence Berkeley National Laboratory, where he was active in pursuit of alternative and renewable energy technologies, and Professor of Physics and Applied Physics at Stanford University, where he helped launch Bio-X, a multidisciplinary institute combining the physical and biological sciences with medicine and engineering. Previously he was head of the Quantum Electronics Research Department at AT&T Bell Laboratories.

Dr. Chu is the co-recipient of the 1997 Nobel Prize in Physics for his contributions to laser cooling and atom trapping and has received numerous other awards.

Mr. Terazawa was appointed as Chairman and CEO of the Institute of Energy Economics, Japan (IEEJ) in July 2021.

Before joining IEEJ, he supported then Minister Yasutoshi Nishimura as the Senior Advisor of the Cabinet Office between January and June 2021 to assist the Government’s response to the Covid-19 pandemic and the formulation of the Growth Strategy including the Japanese “Green New Deal”.

Earlier, he served at the Ministry of Economy, Trade, and Industry (METI) of Japan where he held leading positions including the Vice-Minister for International Affairs.

From June 2011 to December 2012, Mr. Terazawa served as the Executive Secretary to the then Prime Minister Yoshihiko Noda. During this period, he assisted the Prime Minister on the Government’s multiple challenges to deal with the aftermath of the Great East Japan Earthquake.

Mr. Terazawa has been the Senior Specially Appointed Professor at the Tokyo University of Science, teaching international negotiations since January 2020. He is a graduate of the University of Tokyo’s Faculty of Law. He also studied at Harvard University in the United States, where he earned MBA in 1990. He was born in January 1961 in Osaka, Japan.