"Boundary layer fluctuations and their effects on mean and variance temperature profiles in turbulent Rayleigh-Bénard convection" by Prof.Penger Tong 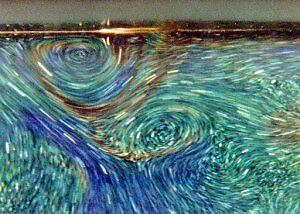 Abstract:
Boundary layer (BL), which was introduced more than 100 years ago by Ludwig Prandtl, is an important concept in science and engineering, which has had a profound impact in fluid physics, aerodynamics, and mathematics. It also has a close connection to many practical engineering problems ranging from skin friction drag to mass and heat transfer near a solid surface. Our current understanding of the BL problems is limited in two flow regimes. At the low velocity limit, where the fluid flow is laminar, Blasius solved the BL equation and obtained the well-known similarity solution. At the high velocity limit, where the nonlinear effect becomes dominant, the BL is turbulent and extends throughout the bulk region of the flow. In this case, a logarithmic velocity (or temperature) profile was predicted to extend from the solid surface deep into the bulk region. In fact, there is a large class of BL flows remained between the two limiting cases. The thermal BL in turbulent Rayleigh-Bénard convection with the Rayleigh number Ra < 1014 is an example, in which the BL is not fully turbulent yet but there are significant BL fluctuations resulting from intermittent eruption of thermal plumes from the BL. In this talk, I will report our recent experimental and theoretical study of the mean temperature profile q(z) and temperature variance profile h(z) near the lower conducting plate of a specially designed quasi-two-dimensional cell for turbulent Rayleigh-Bénard convection [1]. The measured q(z) is found to have a universal scaling form q(z/d) with varying thermal boundary layer (BL) thickness d, and its functional form agrees well with the recently derived BL equation by Shishkina et al. The measured h(z), on the other hand, is found to have a scaling form h(z/d) only in the near-wall region with z/d £ 2. Based on the experimental findings, we derive a new BL equation for h(z/d), which is in good agreement with the experimental results. The new BL equations thus provide a common framework for understanding the effect of BL fluctuations.

*Work done in collaboration with Y. Wang and X.-Z. He and was supported by the Research Grants Council of Hong Kong SAR and by the China Thousand Young Talents Program.

We look forward to seeing many of you at the seminar.