Solubility and Internal Stress in Nanograined Materials and Nanoparticles 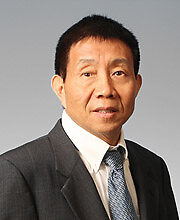 Energy Materials and Surface Sciences Unit (Qi unit) would like to invite you to a seminar by Professor Tong-Yi Zhang from Shanghai University.

Venue: B503, Centre Building Level B

Title: Solubility and Internal Stress in Nanograined Materials and Nanoparticles

In this presentation, I report the development of a Gibbs-approach based adsorption isotherm for grain boundary (GB) segregation in nanograined (ng) polycrystals and for surface segregation in nanoparticles. The newly developed adsorption isotherm takes the advantages from both Gibbs and McLean adsorption isotherms and is able to analytically calculate the GB segregation when the activation energy for GB segregation and the solute concentration in the solid solution grains are available. The solute atoms inside GBs and grains possess different partial molar volumes, thereby generating an internal stress field, which, in turn, enhances the solute solubility inside grains. For an open system, the environment serves as a solute reservoir and solute atoms can move between the ng material and the environment to maintain an equivalent chemical potential of the solute. In this circumstance, the apparent solute concentration will be greatly enhanced in an ng material in comparison to its coarse-grained counterpart. This because an ng material has a large GB volume fraction, leading to more solute atoms segregated at GBs, and a considerable increase in the lattice concentration that is boosted by the concentration-induced stress field. The Gibbs-approach based adsorption isotherm allows one to analyze simultaneously stresses, concentrations and their coupling behaviors in grains and GBs. As an example, the experimental data for the H-Pd binary system are fitted with the newly developed isotherm. The perfect fitting shows an excellent agreement between the theoretical predictions and the experimental results, and determines the GB properties as well.

Tong-Yi Zhang is the founding Dean of SHU MGI and the founding Dean of Shanghai MGI. He was Fang Professor of Engineering and Chair Professor of Mechanical and Aerospace Engineering at Hong Kong University of Science and Technology (HKUST). He earned Master degree in 1982 and PhD in 1985, majoring in materials physics, from University of Science and Technology Beijing, China, and then worked there as a lecturer for one year. He was a research fellow of the Alexander von Humboldt Foundation in 1986-1988 at Universität Göttingen, Germany, a postdoctoral fellow in 1988-1990 at University of Rochester, USA, and a research associate in 1990-1993 at Yale University, USA. Zhang has been working at HKUST since 1993. He was a JSPS (Japan Society for the Promotion of Science) visiting professor at Kyoto University, Japan, in 2010. His research interests include mechanical properties of materials, micro/nanomechanics, surface stress of solids, fracture of piezoelectric materials, thin films, microbridge tests, thermodynamics of materials, diffusion and phase transformation. Zhang has been a vice president of the International Congress on Fracture (ICF) since 2013 and a vice president of The Far East and Oceanic Fracture Society since 2001. He was a recipient of the Second Prize of 2007 State Natural Science Award, China, the Second Prize of 1987 State Natural Science Award, China, and the 1988 National Award for Young Scientists, China. He became ICF Fellow in 2013, Fellow of the Hong Kong Academy of Engineering Sciences in 2012, member of Chinese Academy of Sciences in 2011, Senior Research Fellow of Croucher Foundation, Hong Kong, in 2003, Fellow of ASM International, USA, in 2001. He is Associate Editor-in-Chief of Science China: Technological Science and the Fracture and Continuum Mechanics Subject-Editor of Theoretical and Applied Fracture Mechanics.