Model-free decision making is simple in computation but not flexible in adaptation. Model-based decision making can utilize the knowledge from experience more flexibly but requires more computation. We postulate that humans and animals choose and combine the two methods based on the reliability of their predictions subject to the evolution and development of the brain, individual experiences, and real-time constraints for decision making. We derive algorithms for selection and combination the methods based on the theories of logics and machine learning and test their predictions though analysis of human and animal behaviors.

We postulate that mental simulation is realized by predictive models in the cerebellum and probabilistic inference by the prefrontal cortex. They are combined with the valuation mechanisms of the striatum, the amygdala, and the habenular nucleus for action selection. We will clarify the exact computational processes of mental simulation through identification of responsible areas by neural recording, testing their functional relevance by stimulation and manipulation, and optical recording of neural activities in the local circuit.

We postulate that the time scale of reward prediction is regulated by serotonin and that the balance of reinforcement by reward and aversion by punishment is regulated by different dopamine receptor systems. It is theoretically predicted that the features of decision making are regulated depending on the animal's environment and experience. This will be tested through behavioral analysis under various environmental conditions and pharmacological and genetic manipulations. 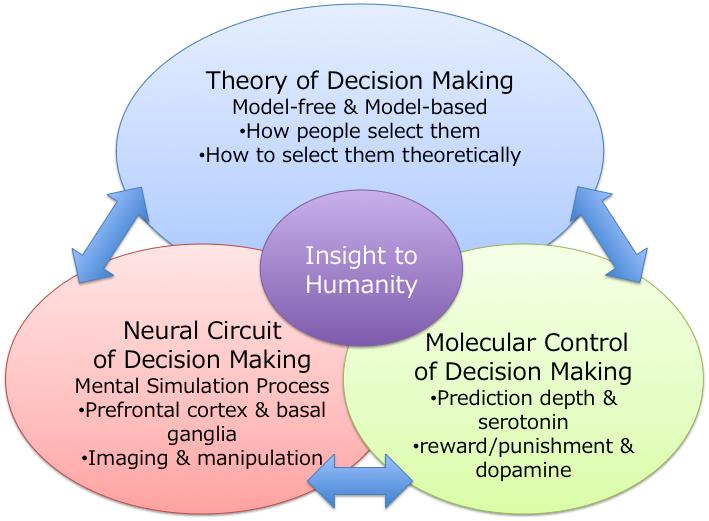