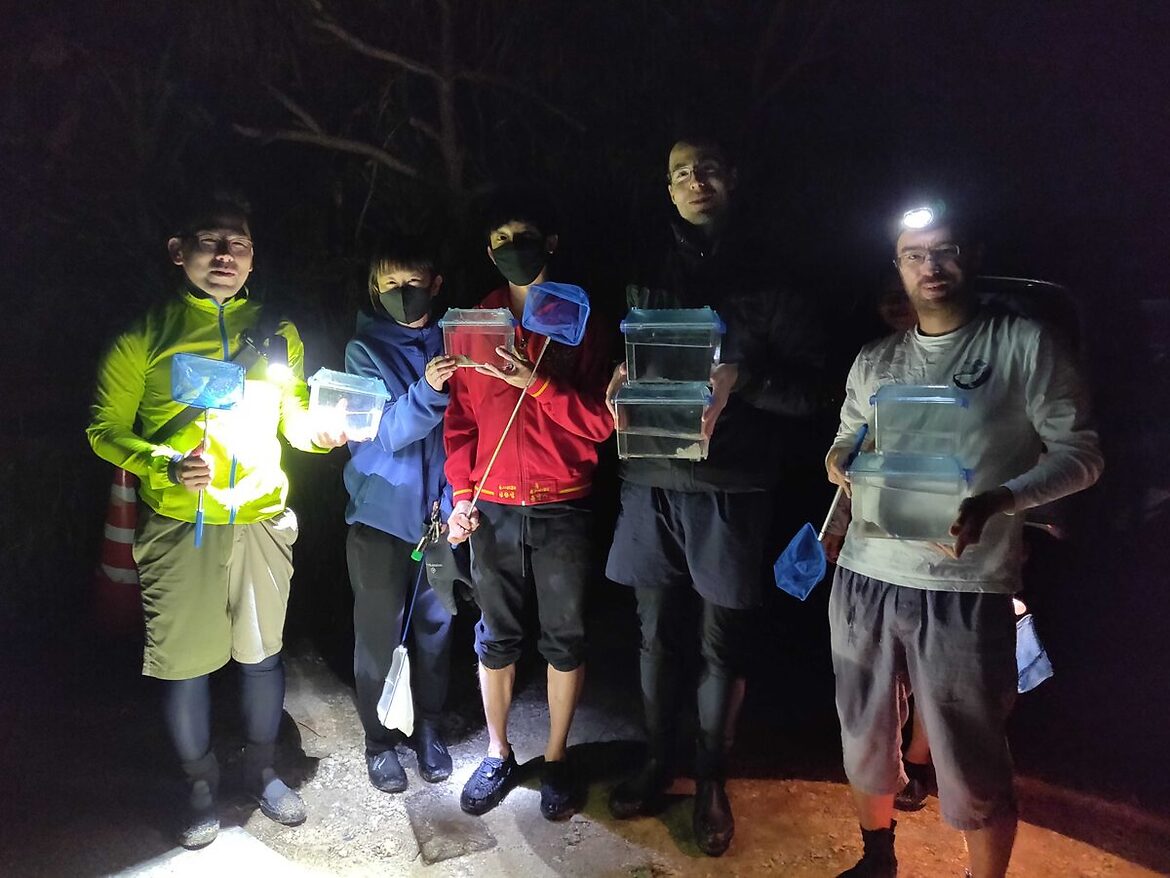 On the 12th of December, members of the Reiter Unit and the Cephalopod Care Team assembled at 10pm on the shores of Okinawa. After waiting several weeks for the stormy weather to clear up, we finally had the perfect weather and the low tide we needed for catching some octopuses. Geared up in our water shoes and armed with nets and torches we started our fieldwork with reef walking along the shore.

Almost immediately we came across our first encounter of the night – an Octopus incella crawling across the rocks. Although small in size – adults usually getting up to 28.2–31.0 mm in mantle length; this intertidal species is quite robust and is perfectly fine being completely exposed during low tide, hiding about the rocks and coral. In fact, O.incella was first described in the tropical waters of Okinawa and the shore was littered with these animals that night. We filmed multiple individuals crawling between the tide pools:

The video demonstrates the recently described octopus locomotion patterns whereby the octopus is able to crawl in any direction relative to its body orientation, as well as a lack of any rhythmic pattern in limb coordination:

In comparison to previously described movement in O.vulgaris where the proximal arm shortens and lengthens with each thrust, O.incella shows a more ‘tumbling’ movement as the arms drape over each other in an uncoordinated fashion to propel the animal forward. This of course may just be attributed to the small size of the animal.

We found several more of these octopuses running around the rocks, but tonight our target was the Octopus laqueus – a nocturnal species also initially described in Okinawa. Although it reaches a similar, albeit slightly larger, body size to O.incella, between 23.6–48.2 mm in mantle length, it resides in shallow water rather than in the intertidal zone.

Halfway through the night we were also visited by Callistoctopus ornatus – the ornate night octopus known for its vivid reddish-pink body color and white dots running down the arms:

A much larger body size means these octopuses are of commercial value and are only allowed to be caught by fishermen in Japan, so we left it to its exploration of the tidepools.

The Okinawan coast is rich with biodiversity and apart from the octopuses we also encountered a plethora of various sea creatures, such as sea urchins, which local fishermen were out to collect that night, as well as a beautiful nudibranch, the Spanish dancer:

After some amazing teamwork, we had a successful night of hunting and caught several specimens of Octopus incella & Octopus laqueus.  We then drove a mere 10mins back to the OIST Marine Station to house these octopuses, which now live in separate tanks and are studied by Aditi, a PhD student, and Kazumichi, a post-doc, who are interested in characterizing the behaviors of these poorly studied animals.