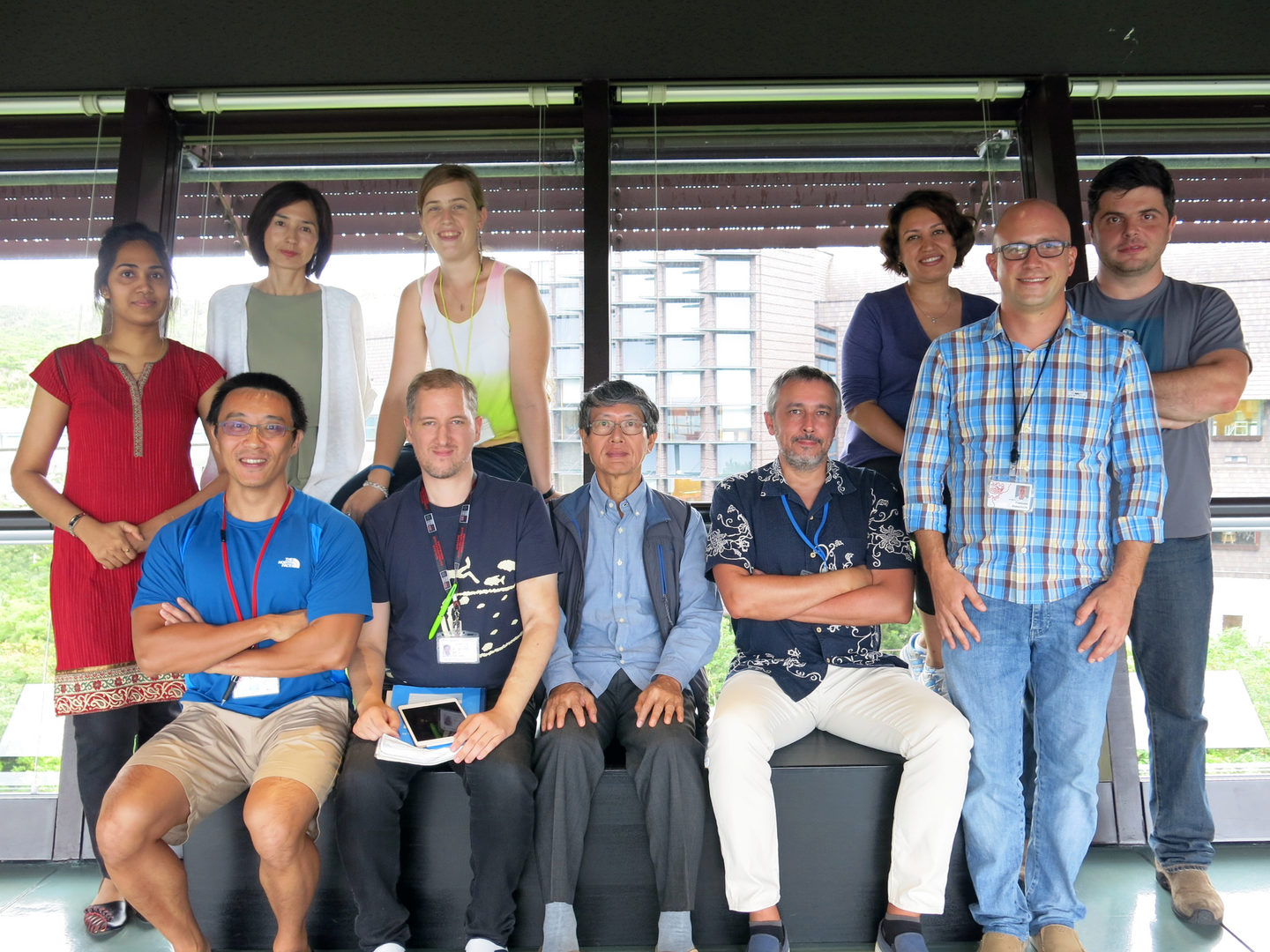 In the presynaptic terminal, neurotransmitters are filled in synaptic vesicles and released by vesicle exocytosis. After exocytosis, vesicle membranes are retrieved by endocytosis and refilled with neurotransmitter actively taken up from presynaptic cytosol to be reused for the next round of neurotransmission. At glutamatergic synapses, glutamate is concentrated in synaptic vesicles at ~ 100 mM, that is ~10 times higher than its cytosolic concentration.  Therefore, it is thought that glutamate can passively leak out of vesicles. In fact, in isolated vesicles, isotope-labeled glutamate leaks out of vesicles. However, it is controversial whether glutamate leaks out of vesicles in presynaptic terminals. Using the giant synapse calyx of Held visualized in rodent brainstem slices, we investigate whether glutamate leaks out of vesicles, and if it does, to what extent.  To this aim, we washed out presynaptic cytosolic glutamate using whole cell recording pipette containing no glutamate and monitored the amplitude of spontaneous miniature, i.e. single vesicular, EPSCs (mEPSCs) and multi-vesicular EPSCs evoked only infrequently (1/10 min) by presynaptic action potentials, in simultaneous presynaptic and postsynaptic patch-clamp recording. Our results indicated a steep decline of evoked EPSC amplitudes, but much less reduction of mEPSC amplitude over 30 min after washout cytosolic glutamate. We estimated the number of vesicles, which underwent recycling after evoked and spontaneous exocytosis during 30 min period.  From these results, we conclude that leakage of glutamate from vesicles does occur in the absence of cytosolic glutamate, but plays a minor role in the rundown of evoked EPSC amplitude, which is mainly caused by accumulation of empty  vesicles in presynaptic terminals retrieved after spontaneous and evoked glutamate release.
Chihiro Takami, Kohgaku Eguchi, Tetsuya Hori, Tomoyuki Takahashi (2017) J Physiol 595, 1263-1271.

In simultaneous pre- and postsynaptic recording, in the absence of glutamate in presynaptic pipette, cytosolic glutamate is washed out by pipette solution having a much larger volume than the terminasl. As glutamate washout proceeds, both evoked and spontanaeous miniature (m) EPSCs undergo rundowns in amplitude (Fig 1A, B).  The rate of rundown, however, is much less for mEPSCs. Such a dissociation has been observed previously (Zhou et al, 2000; Ishikawa et al, 2002), but there is no convincing explanation. Since the limited reduction of mEPSCs has been attributed to low signal to noise ratio of mEPSC recording, we analyzed mEPSC amplitude histogram (open coulms, Fig1D) in comparison to noise histograms (filled colums) showing that both histograms are well separated. 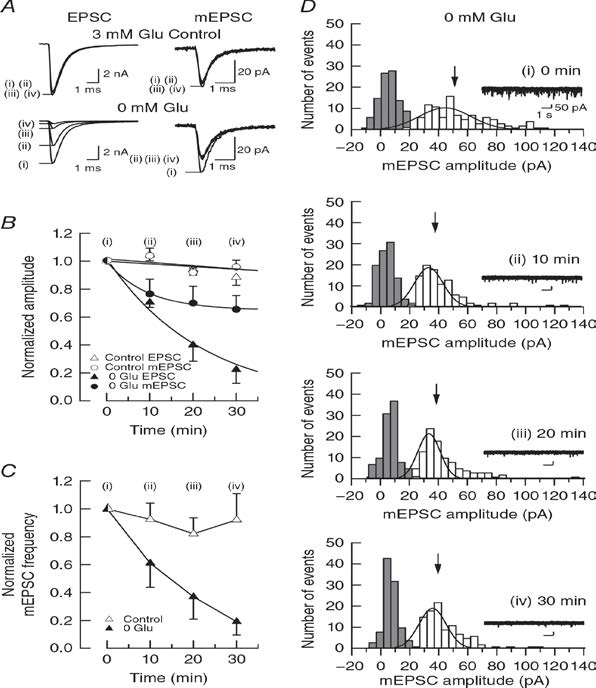 Rundown of EPSCs occurs without glutamate washout when vesiclular acidification is inhibited using the vacuolar ATPase inhibitor bafilomycin A1.Bafilomycin block vesicle acidification, thereby blocking refilling newly endocytosed vesicels with glutamate. In hippocampal glutamatergic synapses in culture, bafilomycin causes rundown of evoked EPSCs, but it is controversial whether it causes rundown of mEPSCs due to passive glutamate leakage out of vesicles. We re-examine this issue and found that bafilomycin attenuates mEPSCs (Fig 2) to a similar extent as in experiments of glutamate washout (Fig 1). 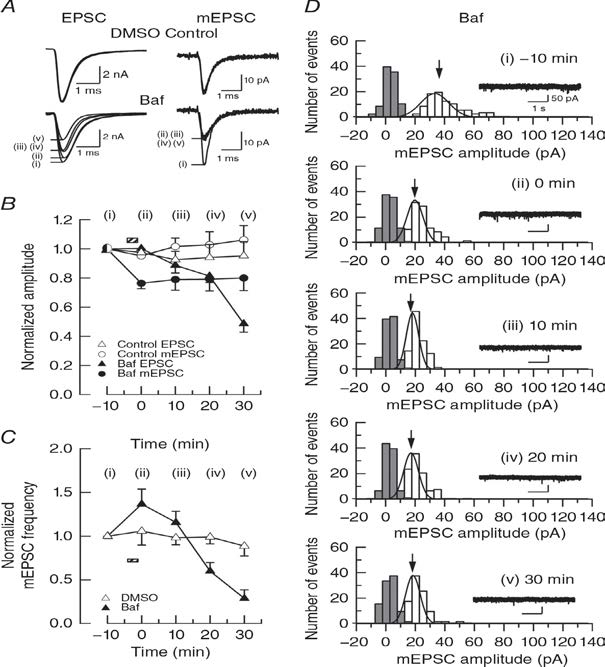 Previous report (Zhou et al, 2000) attributed the smaller amplitude reduction of mEPSCs compared with evoked EPSCs during bafilomycin application to a low detectability of mEPSCs because their amplitude is close to background noise level.  To evaluate this explanation, we reduced mEPSC amplitude by blocking postsynaptic AMPA receptors using CNQX (Fig 3). Titration of CNQX from low to high concentrations, attenuated mEPSC amplitude in a concentration dependent manner. In parallel, evoked EPSC amplitude was attenuated to a similar extent (Fig 3B). CNQX at 1.5 mM attenuated mEPSCs to 19% (Fig 3B), but these events are still clearly detected in separation from noise histogram (Fig 3E). 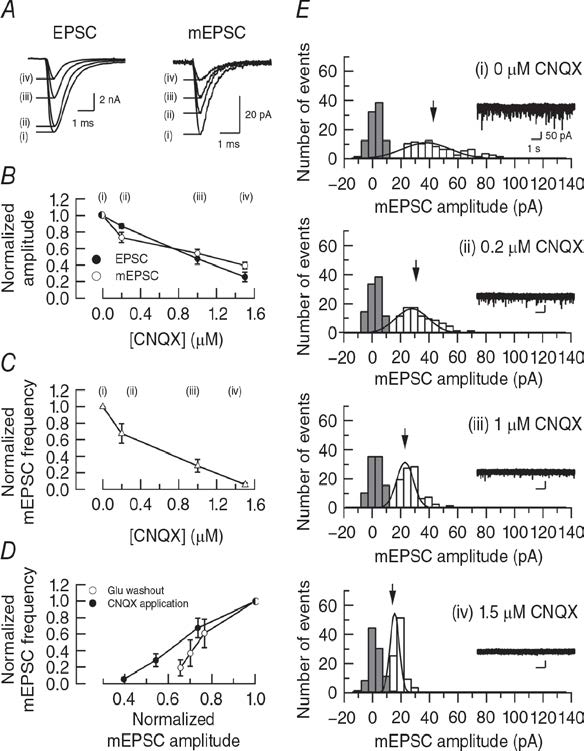 Another interpretation for the dissociation in the magnitude of rundown between mEPSCs and EPSCS is a possible reduction of release probability after glutamate washout from cytosol as suggested in cultured hippocampal autapses (Herman et al, 2014).  We tested this possibility using presynaptic membrane capacitance measurements. We evoked exo-endocytosis of synaptic vesicles by a square pulse- elicited Ca2+ currents in the presence of glutamate and in its absence (Fig 4).  Our results indicate no difference in exocytic magnitude. Thus, release probability is unaffected by glutamate washout. 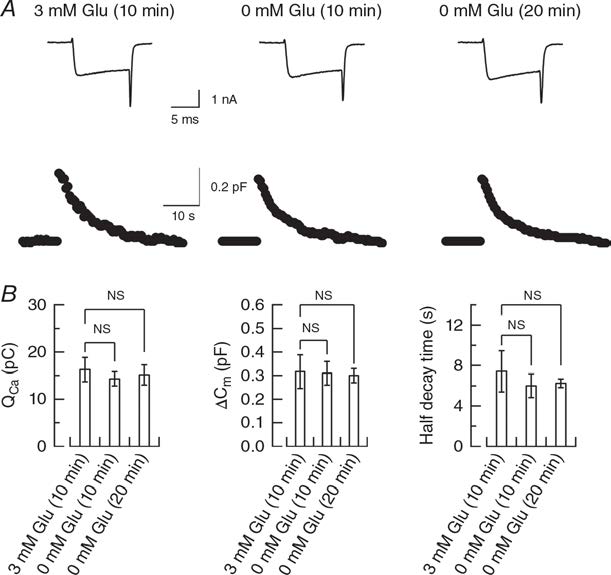 These results altogether indicate that glutamate can leak out of vesicles when its uptake is blocked.  The greater reduction of evoked EPSCs is likely due to recycling replenishment of empty vesicles that occurs after spontaneous and evoked exocytosis. Since the mEPSC amplitude represents events produced by filled vesicles, their reduction reflects vesicular glutamate leakage more faithfully. Bafilomycin is conventionally utilized for counting the number of recycling vesicles in such a way to divide time integral of evoked EPSC amplitude by mEPSC amplitude, assuming no leakage of vesicular neurotransmitter (eg Ikeda & Bekkers, 2009).  Such calculation needs corrections of glutamate leakage and more importantly the number of recycling vesicles after spontaneous exo-endocytosis from mEPSC frequency during the recording period.

We characterized synaptic vesicle dynamics in the calyceal terminals in culture.  In resting terminals labeled vesicles moved with irregular speeds and various trajectories, indicating that SV movements were more heterogeneous than previously thought.  After fixation of the cells with aldehyde, SV mobility dropped down to 1/8, providing a good S/N ratio for SV imaging. Using IMARIS software, we analyzed SV movements quantitatively. SVs traveling a longer distance generally had a higher maximal speed.  The SV mobility in calyceal terminal swelling was twice higher than that in hippocampal presynaptic boutons when compared for similar size structures. Percentage of long SV trafficking (trajectory length > 4 µm) decreased from 30% to 10% as presynaptic terminals undergo structural development from stage 1/2 (immature) to 3/4 (mature). When Venus-VGLUT1 and Venus-VGLUT2 were over-expressed into separate CN neurons, Venus-VGLUT1 SVs showed higher mobility than Venus-VGLUT2 SVs.  Furthermore, track length and max speed were higher and SVs with active directional modality were more frequently observed in Venus-VGLUT1 SVs. These results suggest that the molecular signature of SVs can affect their mobility. Disrupting microtubules assembly using nocodazole preferentially reduced long/fast traffics, suggesting that microtubules are involved in inter-synaptic SV trafficking.  When vesicle exocytosis was triggered by bath-application of 65 mM [KCl] solution, many SVs underwent exocytosis, long/fast SV movements were significantly reduced, and remaining SVs became immobile.  Hypertonic sucrose solution had no effect on SV mobility, but reduced directional modality of SVs. Electrical stimulation at 1 Hz had no appreciable effect on vesicle mobility outside or within active zone.

a-Synuclein is an endogenous protein normally attached to vesicular or plasma membranes in the nerve terminal. Excess a-synuclein is known to accompany a-synucleinopathy including Parkinson’s disease.  We have loaded a-synuclein into calyx terminals in acute slices and found that it slows endocytosis with no immediate effect on exocytosis or ICa.  This inhibitory effect of a-synuclein on vesicle endocytosis was rescued by co-loading the microtubules depolymerizing drug nocodazole in nerve terminals. Furthermore, a photo-switchable microtubules depolymerizer photostatin co-loaded with a-synuclein rescued the latter effect under 390 nm illumination, but its rescuing effect was reversed at 510 nm illumination. a-synuclein has little effect on basal neurotransmission, but slows recovery of EPSCs from short-term synaptic depression, thereby impairing fidelity of high frequency neurotransmission. Nocodazole rescued all these defects caused by a-synuclein. These results suggest that microtubules over-assembly underlie the loss of function caused by a-synuclein loading.

When brains are in ischemic state, neurons start to degenerate because of glutamate efflux from cells. Hippocampal CA1 region is known to be one of the most sensitive regions to ischemic insult.  In fact, glutamatergic field EPSPs recorded from CA1 undergo long-term potentiation upon application of oxygen/glucose deficient (OGD) solution in hippocampal slices. This ischemic LTP (iLTP) is induced presynaptically because it accompanies a decrease in the PPR (see above).  After experiments using pharmacological tools, we found that the presynaptic mechanism underlying iLTP largely overlap with that operating for exo-endocytic balancing at the calyx of Held (Eguchi et al, 2012 Neuron) as well at   hippocampal synapses in culture (Micheva et al, 2003 Nat Neurosci). Namely, both the iLTP and exo-endocytic balancing mechanisms are mediated by a signaling molecule cascade including NMDA receptor, NO, protein kinase G, Rho kinase, and PIP2.  On top of it our results suggest involvement of astrocyte in the upstream of NO.

We developed ultra-high resolution mas-spectrum analysis and detected >5,000 proteins in synaptosomal fraction from P20 rat brain tissue. We further dissected synaptosomes into free vesicle, cytosol, membrane and mitochondrial fractions and quantitated copy numbers of individual proteins in each fractions. After confirming that typical vesicle proteins or active zone (AZ) proteins are predominantly in free vesicle or membrane fractions including AZ, we found many other proteins residing in both free vesicle and AZ membrane fraction in different quantities. We have also found new presynaptic proteins and unexpected expression patterns of known proteins.