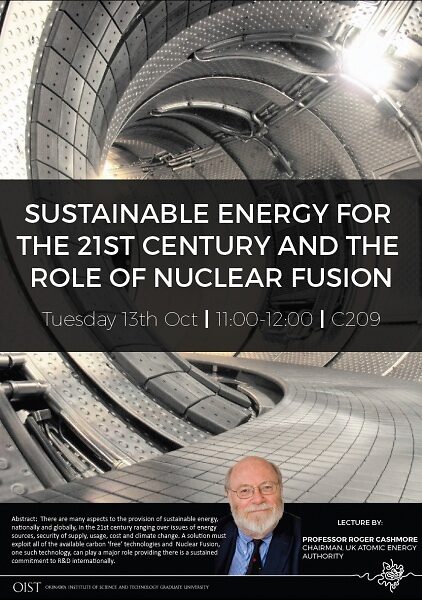 Title: Sustainable Energy for the 21st  Century and The Role of Nuclear Fusion

Abstract:  There are many aspects to the provision of sustainable energy, nationally and globally, in the 21st century ranging over issues of energy sources, security of supply, usage, cost and climate change. A solution must  exploit all of the available carbon ‘free’ technologies and  Nuclear Fusion, one such technology, can play a major role providing there is a sustained commitment to R&D internationally.

Introduction:  Roger Cashmore was appointed Chairman of the UK Atomic Energy Authority on 30 July 2010. He is a Fellow of the Royal Society and in 2010 led the Royal Society working group on Nuclear Proliferation.  He is a former Principal of Brasenose College in Oxford, and is a Professor of Experimental Physics in Oxford. Before returning to Oxford, he was Director of Research and Deputy Director General of CERN, the European high energy physics laboratory in Geneva, Switzerland, where he was responsible for the experimental programme at the Large Hadron Collider (LHC). Before leaving for CERN he was Chairman of Physics in Oxford and during his teaching and research career he has more than 200 publications in learned journals.  He has been a Visiting Professor in Tsukuba in Japan, Brussels, Padua, Fermilab in the United States and holds an Honorary Doctorate from the Joint Institute of Nuclear Research in Dubna, Russia.  He was awarded the C V Boys Prize of the Institute of Physics and a Research Award by the Alexander von Humbold Foundation in Germany. In 2004 he was made a Companion of the Order of St Michael and St George (CMG) for services to international particle physics.