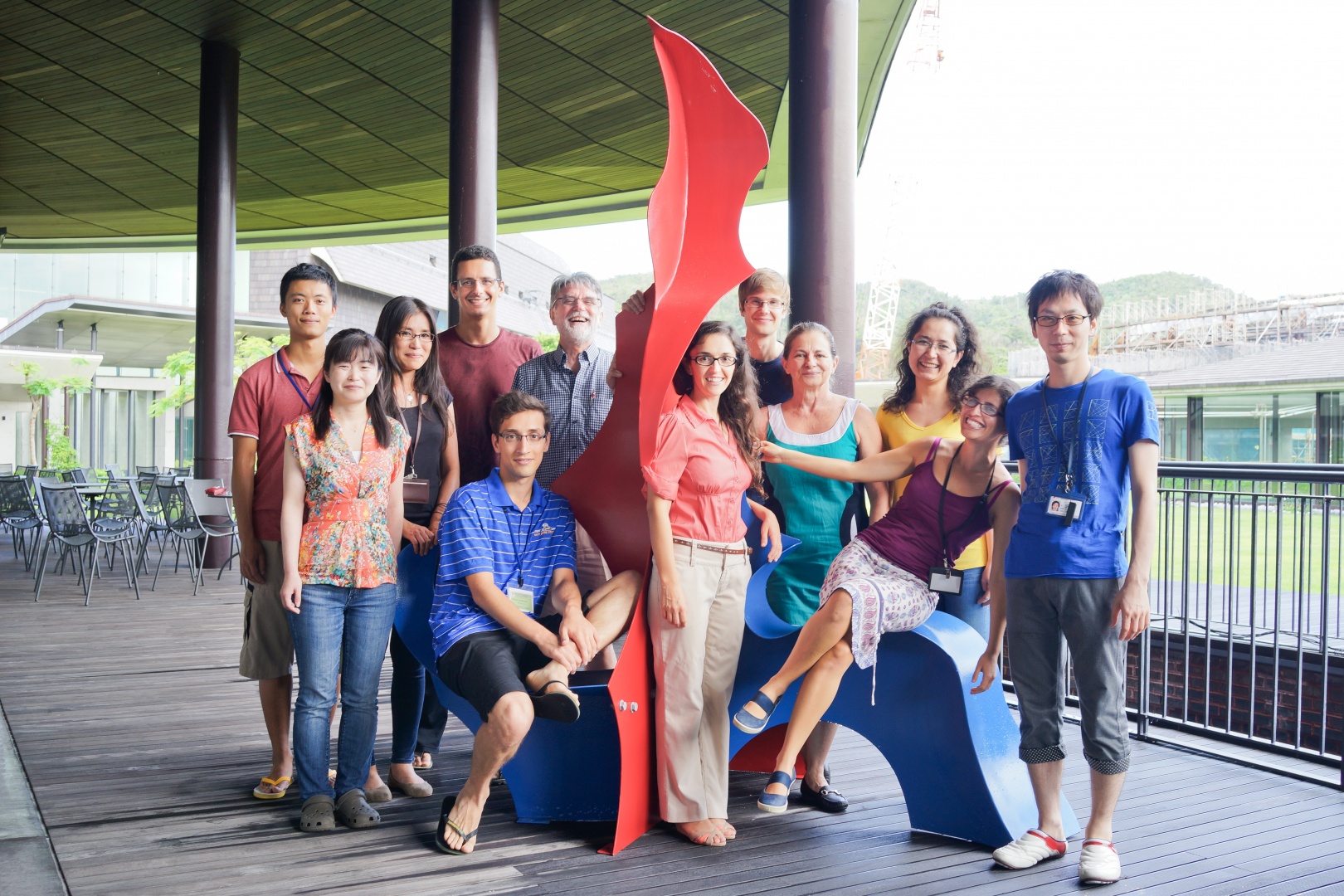 In the fiscal year of 2014, the Brain Mechanisms for Behaviour Unit was made up of six individuals. The latest addition was Yoko Nakano the research technician who has increased the group’s productivity. She has been instrumental in the development of viral vectors for our first steps in optogenetics, and in genotyping the new transgenic animal colonies.  We have had a great deal of help from Dr Mike Lazarus and Dr Yoan Cherasse in this development and much of our results have depended on their generous supply of AAV vectors with channel rhodopsin plasmids included.  The spring of 2015 Ms. Nakano paid them a visit at the International Institute for Sleep Medicine at the University of Tsukuba to learn how to make AAV viruses including plasmids that express the fluorescent calcium sensor GCaMP6f that she had engineered in OIST.

Dr Violeta Lopez Huerta has been working on the new animals expressing Cre recombinase as well as single cell recording in animals injected with the channel rhodopsin containing viruses. The first of her publications from this work was published electronically in February 2015 but is still not in the paper journal yet. Dr Omar Jaidar has now good evidence that optogenetic stimulation in the striatum in freely moving animals produces dramatic changes in the behavior of mice and is studying the interaction of these effects with dopamine. Dr Takuya Hikima left us in December 2014. This year Dr Marianela Garcia Munoz has some preliminary evidence of behavioral differences within groups of different of transgenic mouse strains and has also completed and published studies of drug effects in cultured cortical and striatal cells.  She has contributed strongly to the manuscript writing that has occupied us this year.  Three of the 6 manuscripts submitted were published in this fiscal year and two more are in press.

Hermina Nedelescu who initiated studies in the Unit on the neuroanatomy of the cerebellum as part of a scholarship from the Japan Society for the Promotion of Science is now working in Tokyo. This year we had two student interns, Saifullah Khan learned some stereotaxic techniques and joined in some behavioral studies.  Johannes Blausenwein under the guidance of Dr. Lopez-Huerta helped in the implementation of the single pellet-reaching task in mice and is acknowledged by authorship in her paper. OIST graduate students on rotation this year were Nilupaer Abudukeyoumu and Jiabao Chen. Ms Abudukeyoumu is now doing her Ph.D. research in the Unit.

This has been a year of consolidation with 6 papers submitted and 5 in press or published at April 1st 2015.  We have continued last year’s projects but serendipity (see section 3.1) required a side project that is already in press.

3.1 Another division of the striatal output neurons

When we first infected striatal output neurons we took care to use an AAV construct that we thought would infect all the cells in the mouse striatum. We checked the outputs to substantia nigra and to globus pallidus and entopeduncular nucleus and all were well stained by the ouput fibres.  Such staining assured us that the virus was not biased to either the directly projecting D1 expressing neurons or the indirect pathway extending from D2 neurons. However, when we actualy looked in striatum there were gaps in the staining for the virus. Gaps that looked very like the striosomes, or patches, or dopamine islands on which I had worked in the 1980’s. The different names are the result of this strange compartmental arrangement in the striatum having been described by several people with different methods.  Early extensive work from Prof. Ann Graybiel at McGovern Institute for Brain Research at MIT demostrated that all the methods identified the same areas, although with different preferences as to the age of the animals involed.  The gaps in the striatal expression of the virus were not stained by calbindin antibodies but were positive for μ-opioid receptor 1 (MOR1) proving that they were indeed the striosomes.  Although the early anatomical work suggested that the compartments were separate - neuronal dendrities tended to stay within the borders - no direct evidence of their infividual connectivity had been obtained because of the lack of any in vivo staining method for the two areas.  The striosomes were known to form a labyrinth within the matrix of the striatum so sections illustrated them as 'patches'.  Not only did our virus localise the matrix cells in vivo and in vitro but the channelrhodopsin with which it infected the cells made them sensitive to light.  By recording within a patch and exciting all of the surrounding matrix with light it was clear that none of the strisomal cells responded.  They did respond to applied alutamate, but the neighbouring matrix cells did not respond ot their excitation.  The two compartments were indeed separate! (See Figure 1). 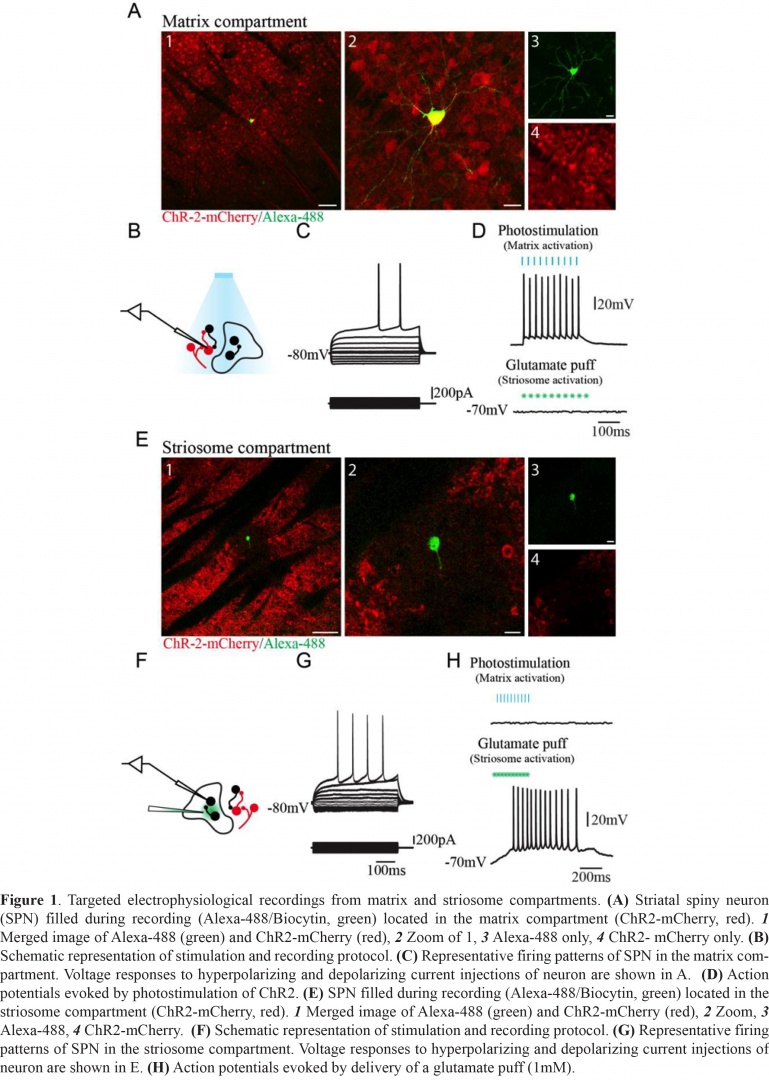 This year also saw the work with the Physics and Biology Unit come to fruition in the publication of a research article in Frontiers in Systems Neuroscience. The re-analysis of experiments done as part of the study of non-synaptic NMDA receptors in striatum (also published this year in Neuropharmacology) let us provide evidence that Mutual Information calculations between two compartments of cultured cells yielded results that were dependent on the integrity of the neuronal connections between the compartments. These experiments supported others that also suggest that connections between cortex and striatum, grown in separate areas of a culture dish, were mainly in one direction – from cortex to striatum.  Since this was NOT true in earlier attempts to culture the cells together, it marks a break-through in culturing technology as well as the application of sophisticated mathematical calculations to connectivity in neural networks (see Figure 2). 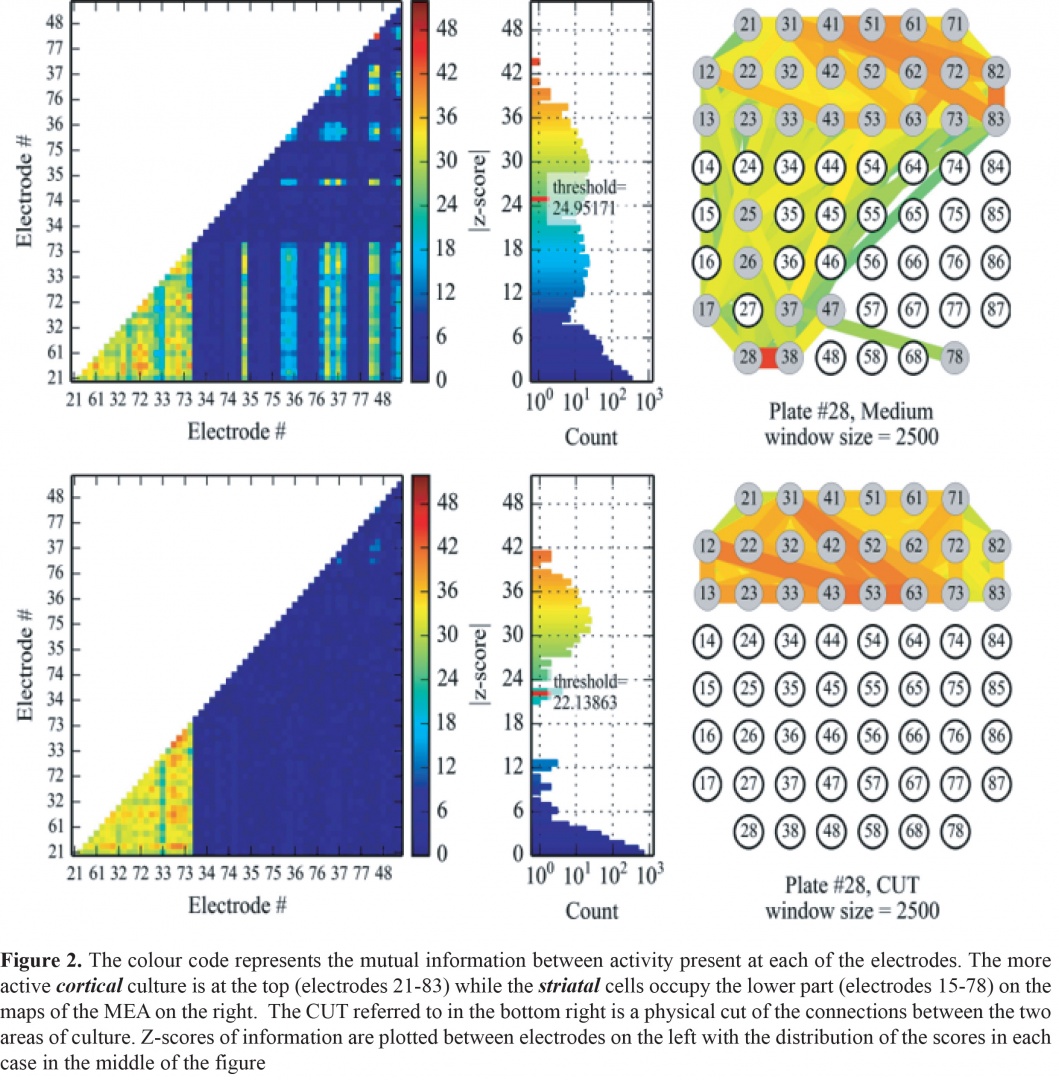 3.3 How does the brain learn to remember situations and recognize common objects?

One solution to this was proposed in a book published in 1949 by Donald O. Hebb.  His idea was that neurons could become connected in assemblies that would fire together when a situation or event happened and with repetition this assembly would come to represent the situation (or object) and as the connections among the assemblies became stronger a small relevant stimulus would ignite the whole assembly and act like a memory of the event or object of importance. He imagined that such assemblies would be formed as the animals became familiar with their world and that cells that usually fire together becoming more strongly connected together would build such assemblies.
Experimentally it was hard to examine the assembly idea because of the need to record enough neurons to include several ‘assemblies’ and ideally with every member present in the recordings.  This is becoming possible, and in a recent collaborative work just accepted in International Journal of Neural Systems, we succeeded in finding assemblies, that have all the properties that Hebb described, in groups of cultured cortical neurons whose calcium transients can be recorded with single cell resolution in groups of hundreds of cells at a time.  The results are a little surprising because Hebb intended the assemblies to respond to events in the outside world.  The cultures have no sensory input from the outside world but are able – indeed seem unable not to - form these assemblies. However, a recent publication by a previous member of the Unit suggests that these assemblies also code for visual information (Carrillo-Reid et al J. Neuroscience 2015).

3.4 Activity of axons in layer 1 of cerebral cortex in awake mice.

The final output from much of ventral thalamus related to movements is to layer 1 of cortex.  Having explored the anatomical distribution of axons from the ventromedial nucleus of thalamus we have now the first images of calcium activity in those same fibers in awake, head fixed mice in collaboration with Dr Bernd Kuhn head of the Optical Neuroimaging Unit and his team. The difference in activity in mice resting still and moving on a spherical floating ball is dramatic (see Figure 3).  Clearly this activity needs to be further analyzed but it already suggests dramatic changes with movement initiation. 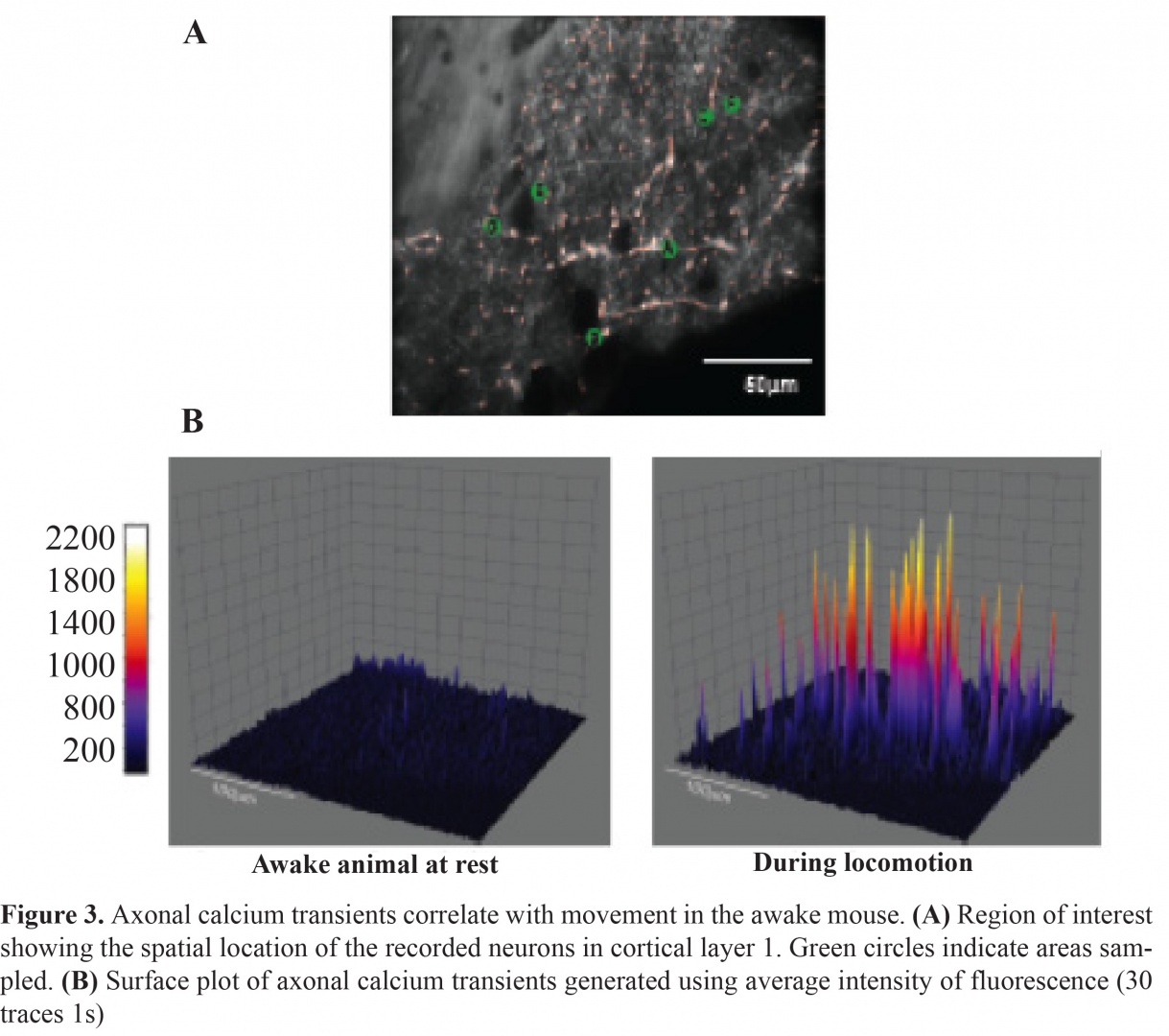 National collaborations within Japan include:

I have been involved in two graduate student courses taught in OIST Neurobiology (B05) April - August 2014, Controversies in Science (A401) September - December 2014.

6.4 Molecular mechanisms of dentrite patterning---how we can use in utero electroporation and what we have found.

6.5 Why coffee wakes us up? -- Novel roles of adenosine A2A receptors in sleep-wake regulation.