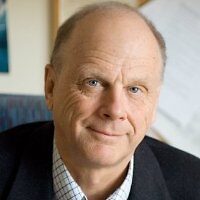 Abstract:
I will discuss exceptional symmetries in maximally supersymmetric supergravity theories. I do it in the light-cone gauge formulation where only the physical degrees of freedom are present. In d=4 both the maximal supersymmetry and the E_7 symmetries are symmetries of the Hamiltonian and both can be used to find the Hamiltonian. When we lift the theory to d=11 we find that again both symmetries are seemingly present but it takes field redefinitions to see them both. I will also show that E_8 is also spanned by the supermultiplet and should also be a symmetry of the maximally supersymmetric supergravity theories in any dimension.

Biography:
Prof. Lars Brink has been a professor of theoretical elementary particle physics since 1986 at Chalmers University of Technology in Göteborg, Sweden. He was a fellow in the Theory Group at CERN, 1971-73 and was an scientific associate at Caltech, 1976-77. He has been a visiting scientist for longer and shorter periods at CERN, Caltech, ITP in Santa Barbara as well as many other institutions around the world at numerous occasions. He was vice dean of physics at Chalmers, 1987-93 and was the chairman of the board of Nordita in Copenhagen, 1990-93 and a member of the board in 1993-97. He is the chairman of the board of International Center for Fundamental Physics in Moscow since 1993. He was elected as member of the Swedish Royal Academy of Sciences in 1997 and as member of its Nobel Committee for Physics in 2001. He is also the coordinator of the EU Network "Superstring Theory" since the year 2000. His scientific work has been mainly in elementary particle theory especially in the attempts to unify all fundamental interactions. He is one of the pioneers of the Superstring Theory and has also been much involved in supersymmetric quantum field theories. One highlight here is the construction and proof of the first finite quantum field theory in four spacetime dimensions. He was on the Nobel committee from 2008 to 2014, and served as the chairman in 2013.