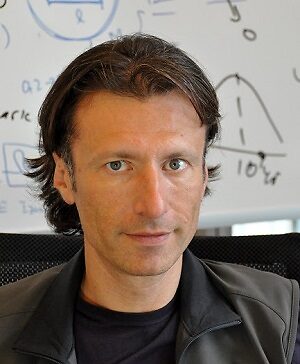 (1) First talk for general audience
Title:  Cosmic connections: from cosmic rays to gamma rays, to cosmic backgrounds and magnetic fields
Abstract:  Combined data from gamma-ray telescopes, cosmic-ray detectors, and neutrino detectors have produced some surprising new insights regarding the most powerful sources in the universe, as well as intergalactic and galactic magnetic fields and extragalactic background light.  I will discuss how a unified treatment of gamma rays, cosmic rays, and neutrinos reveals some intriguing connections between several seemingly unrelated phenomena.
(2) Second seminar for a more narrow audience.
Title.  Higgs relaxation and leptogenesis
Abstract:  The recent measurement of the Higgs boson mass implies a relatively slow rise of the Standard Model Higgs potential at large scales.  A scalar field with such a potential develops a large vacuum expectation value at the end of inflation.  The relaxation of the Higgs field from its large postinflationary value to the minimum of the effective potential represents an important stage in the evolution of the universe.  During the Higgs relaxation, the time-dependent Higgs condensate can create an effective chemical potential for the lepton number, leading to a generation of the lepton asymmetry in the presence of some large right-handed Majorana neutrino masses.  The electroweak sphalerons redistribute this asymmetry between leptons and baryons.  The Higgs relaxation leptogenesis can explain the observed matter-antimatter asymmetry of the universe even if the Standard Model is valid up to the scale of inflation, and any new physics is suppressed by that high scale.  The epoch of Higgs relaxation might have other observable consequences, for example, primordial magnetic fields.
Sponsor or Contact:
Hirotaka Sugawara
All-OIST Category:
Seminar