I have identified over 700 types of long intergenic non-coding RNAs (lincRNAs) specifically expressed during rice reproductive stages in which germ cell differentiation occurs.Non-coding RNAs (ncRNAs) are currently an important topic in biology.More than 90% of the genomes of higher organisms comprise intergenic regions.In most organisms, large numbers of endogenous ncRNAs play important roles at various developmental stages.However, most of their functions, transcriptional mechanisms, and interacting molecules remain unknown in plants.

1. Determining the roles of over 700 lincRNAs in early reproduction

2. Chromatin regulation by CRF1 between germ cells and somatic cells

By integrating 1 and 2, my goal is to construct an RNA/chromatin network model in pre-meiotic germ cells, including the topological organization of ncRNA, multichromosomal regions and chromatin regulators.

2.1 Biogenesis of small RNAs generated from lincRNAs during reproduction

A transcriptome analysis shows that 771 reproduction-specific lincRNAs are identified in rice (Komiya et al., 2014). These lincRNAs serve as precursors for production of small RNAs associated with a plant Argonaute protein (AGO), which has specific functions in the development of pre-meiotic germline cells. Furthermore, lincRNAs that contain the consensus sequence complementary to miR2118 are cleaved within the miR2118 site. Cleaved lincRNAs are processed via DICER-LIKE4 (DCL4) protein, resulting in production of small RNAs (Figure 1).

This study provides the evidence that the biogenesis of small RNAs derived from over 700 lincRNAs required for microRNA cleavage and Dicer-processing, and suggests that non-coding regions are not “junk DNA.” 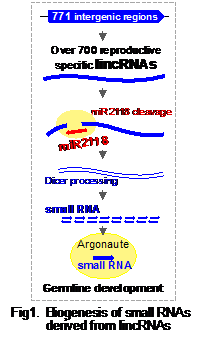 2.2 Roles of over 700 reproductive lincRNAs

To reveal the function of lincRNAs, the targeting system that causes the lincRNAs delition was used.  Presently, rice transformation is performing to make several types of lincRNA-deleted mutants.

2.3 Transcriptional regulation of  lincRNAs though epigenetics

Over 700 lincRNAs are expressed specifically during reproduction.  It is suggested that epigenetic regulation and chromosome dynamics cause their transcription.

DNA methylation analysis showed that over 1000 hyper-methylated regions and hypo-methylated regions were detected in the rice genome specifically during reproduction (Komiya unpublished data). Presently, I am investigating methylated DNA differences in over 700 lincRNAs and lincRNA promoters to investigate epigenetic regulation of non-coding RNAs transcription.

CRF1 is a transcriptional repressor that directly binds to the modified histone for transcriptionally silenced heterochromatin in animals (Bannister and Kouzarides, 2005).  Rice CRF1 mutants showed sterility, suggesting that CRF1 is required for development of rice reproductive tissues (Komiya unpublished data). In FY2015, I hope to reveal the biological roles of CRF1 by detecting CRF1 binding sites using chromatin immuno-purification.

4 Publications and other output