The purpose of my research is "Development of the method in the Assisted Reproductive Technology (ART)". According to most commonly used definition, infertile couples represent 15–20% of all couples in Japan and in US. At present, conventional in vitro fertilization (cIVF: also called insemination method) and intracytoplasmic sperm injection-IVF (ICSI-IVF) are routinely performed for infertility treatment. ICSI differs from cIVF in that an embryologist selects a single sperm to be injected directly into an egg, instead of fertilization taking place in a dish where many sperm are placed near an egg. Each of these methods has its merits and demerits. In generally, it is thought that cIVF is more mild method than ICSI. On the other hand, much more spermatozoa are required for cIVF than ICSI. And furthermore, the integrity of sperm DNA is important for the success of natural or assisted fertilization, as well as normal development of the embryo, fetus and child: however, ICSI increases the risk of transmitting damaged DNA by bypassing sperm selection mechanisms. Thus, selection of suitable sperm provided to ICSI is needed, but sperm isolation method for ICSI is highly limited because selected sperm must be intact. Unfortunately, these methods do not give an expected result to this time.

We have demonstrated for the first time in the world that insemination of single spermatozoon can fertilize an egg in mice. That means spermatozoon has ability to pass through cumulus cell layer and zona pellucida, and then to penetrate into the egg without any help of other sperm.

There are two ways to decrease the risks of using improper sperm for ICSI. One is to select proper sperm to inject into egg, and the other is to reduce application cases of ICSI. Fertilizable spermatozoon can be determined by using our new insemination method (hereafter single sperm IVF). Additionally, behavior of sperm in cumulus cell layer can be observed by microscope in our method. Based on these unique characters, single sperm IVF has great advantage to clarify the specific behavior(s) of fertilizable spermatozoa. The fertilizable spermatozoa are provably suitable for using ICSI. Moreover, the number of sperm applied in insemination may be reduced, if success factors of single sperm IVF are determine. That will lead reducing the application cases of ICSI.

Recently, mechanism fertilization must be reconsidered because some facts contradicting a widely believed model have been reported (see Fig.2). It is noteworthy that single sperm IVF is very useful tool to exam the mechanism of fertilization. 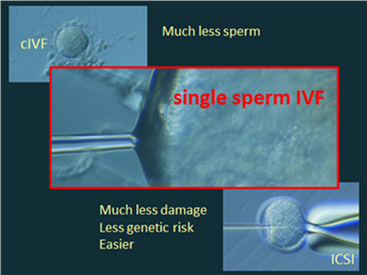 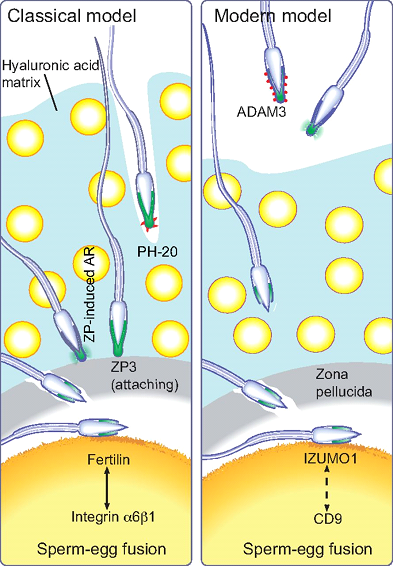 My main project described above has been done as corroboration with medical doctors belonged to the University of the Ryukyus. I have attended to conference of infertility group in Department of Ob/Gyn, which is held once a week for two hours. We discuss about researches of each doctor as well as clinical issues at the conference. As the results of the collaboration done, I have published two original articles as the collaborator of them, and several presentations has been given at the annual meetings of scientific societies to this time. Additionally, I have introduced some methods of sperm selection which are candidates that they may start to use for medical treatment. We are currently evaluating one of those methods in order to integrate to their medical treatment.

4 Publications and other output