Accurate and timely formation of neuronal connections is critical for neural functions. As neurons acquire the “abilities” to recognize other partner cells and form specific connections called synapses, the expression level of these “abilities” is not regulated solely by a simple ON/OFF switch. Rather, neuronal connectivity in the nervous system is locally and dynamically tuned to generate many IN-BETWEEN states that drive a great degree of developmental and behavioral plasticity. My long-term goal is to understand how a small non-coding regulatory microRNA alters “abilities” or expressivity of genes in pre-synaptic neurons and post-synaptic target cells to coordinate synapse formation, growth, and stability. Previously, I uncovered a conserved microRNA miR-8 that plays functional roles during neuromuscular synapse development in Drosophila and found a subset of synaptic cell adhesions molecules mediating downstream effects of miR-8 on both sides of the synapse (Lu et. al., 2014). Over the past year, I focused my investigation of miR-8 on defining an intermediary functional link between miR-8 and one of the key synaptic adhesion molecules. I also performed a proteomic survey of embryonic nervous system towards future research.

I completed analysis of microRNA-8 regulation of the immunoglobulin cell adhesion molecules (IgCAMs) Neuroglian/L1 and Fasciclin III (Fas3) (Lu et al., 2014) and extended the analysis to 1) validate trans-synaptic protein-protein interactions between Nrg and Fas3 and to 2) define the intermediary that links miR-8 to the conserved Nrg/L1 gene. 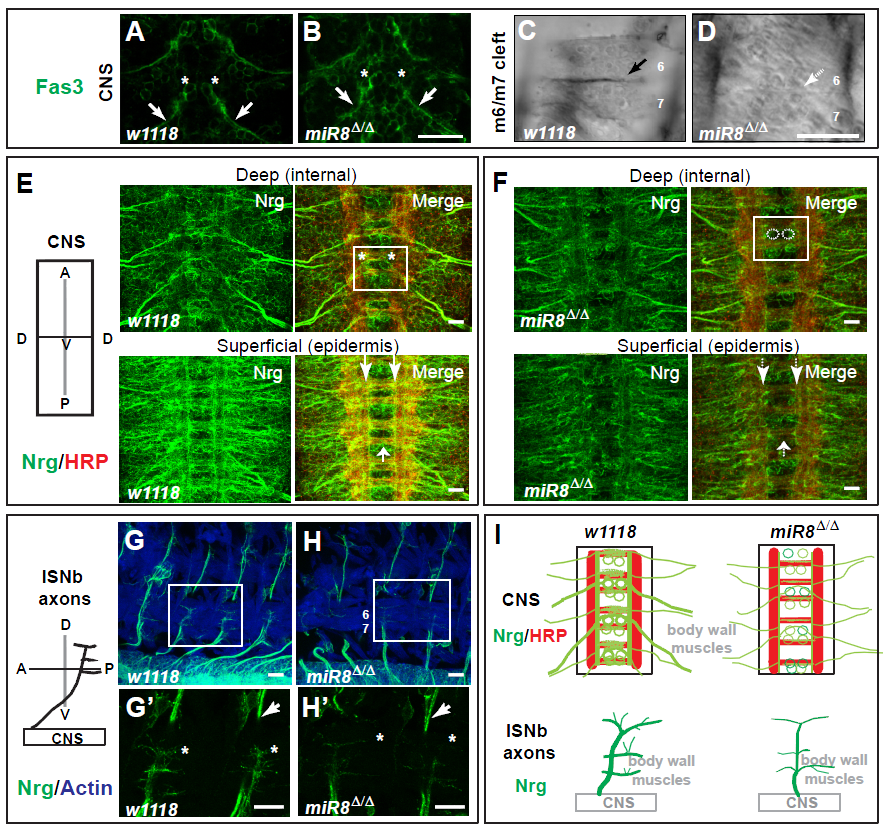 Further genetic interaction analyses confirmed and predicted a model where cooperative trans-synaptic interaction between IgCAMs downstream of miR-8 could account for homeostatic control of synaptic formation and maintenance (Fig. 1I). I extended the genetic analysis of Fas3 and Nrg to survey synaptic proteins interacting with the presumptive Fas3: Nrg protein complex by biochemical interactions and affinity-purification mass spectrophotometry.

In a second line of inquiry subsequent to findings reported in Lu et al., 2014, I investigated post-transcriptional regulation of a conserved DNA-binding factor that may be responsible for transcriptional repression of Nrg/L1. Preliminary results suggest this regulation by miR-8 takes place in vitro and in vivo. However, evidence for neuron sub-type specific regulation is lacking due to the detection limit of assays. To better understand the RNAs differentially regulated by miR-8 in a defined subset of neurons, I have initiated direct isolation of labeled neurons to measure correlation between candidate gene expression levels and dosage of miR-8 in each subset.

4. Publications and other output