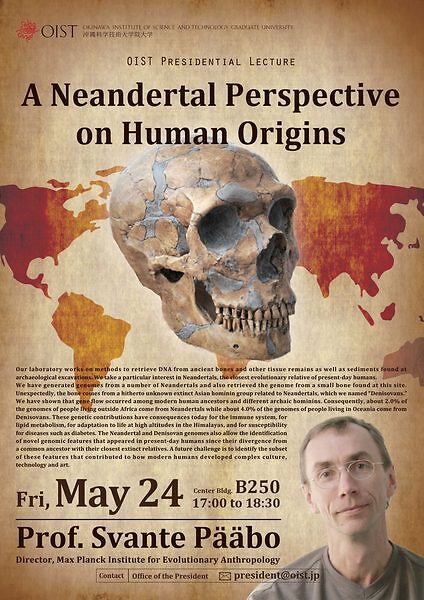 Our laboratory works on methods to retrieve DNA from ancient bones and other tissue remains as well as sediments found at archaeological excavations. We take a particular interest in Neandertals, the closest evolutionary relative of present-day humans.
We have generated genomes from a number of Neandertals and also retrieved the genome from a small bone found at this site. Unexpectedly, the bone comes from a hitherto unknown extinct Asian hominin group related to Neandertals, which we named “Denisovans.” We have shown that gene flow occurred among modern human ancestors and different archaic hominins. Consequently, about 2.0% of the genomes of people living outside Africa come from Neandertals while about 4.0% of the genomes of people living in Oceania come from Denisovans. These genetic contributions have consequences today for the immune system, for lipid metabolism, for adaptation to life at high altitudes in the Himalayas, and for susceptibility for diseases such as diabetes.
The Neandertal and Denisovan genomes also allow the identification of novel genomic features that appeared in present-day humans since their divergence from a common ancestor with their closest extinct relatives. A future challenge is to identify the subset of these features that contributed to how modern humans developed complex culture, technology and art.

Svante Pääbo is a Swedish geneticist who specialises in the field of evolutionary genetics. As one of the founders of paleogenetics, he has worked extensively on the Neanderthal genome. After successfully sequencing the Neanderthal mitochondrial genome in 1997, he led the first project to reconstruct the entire genomic sequence of Neanderthals, which was completed in 2010.  The project allowed new insights into human evolutionary anthropology and possible interbreeding between Neanderthals and modern humans.  Extensions of his interest in evolutionary genetics and the techniques he developed for isolating and analyzing ancient DNA have led to the discovery of new species of ancient hominids, such as the Denisova hominin in 2010, and advanced our ability to work with ancient DNA in areas as diverse as forensic archaeology and paleontology.

Professor Pääbo has been a member of the Royal Swedish Academy of Sciences since 2000, and was elected a Foreign Member of the Royal Society in 2016. Since 1997, he has been director of the Department of Genetics at the Max Planck Institute for Evolutionary Anthropology in Leipzig, Germany.