Presidential Lecture - “New perspectives onto the Universe in the multi-messenger astronomy era” by Dr. Samaya Nissanke 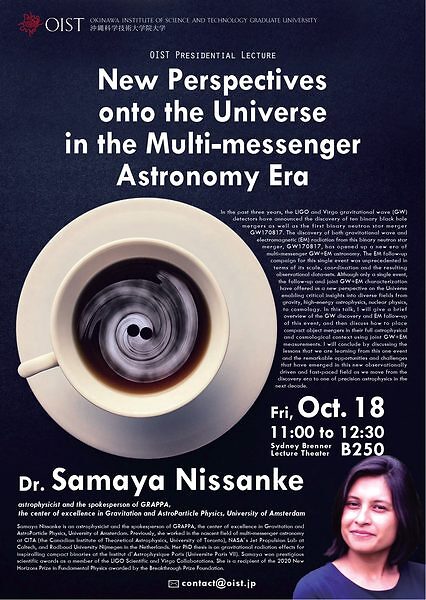 In the past three years, the LIGO and Virgo gravitational wave (GW) detectors have announced the discovery of ten binary black hole mergers as well as the first binary neutron star merger GW170817. The discovery of both gravitational wave and electromagnetic (EM) radiation from this binary neutron star merger, GW170817, has opened up a new era of multi-messenger GW+EM astronomy. The EM follow-up campaign for this single event was unprecedented in terms of its scale, coordination and the resulting observational data-sets. Although only a single event, the follow-up and joint GW+EM characterization have offered us a new perspective on the Universe enabling critical insights into diverse fields from gravity, high-energy astrophysics, nuclear physics, to cosmology. In this talk, I will give a brief overview of the GW discovery and EM follow-up of this event, and then discuss how to place compact object mergers in their full astrophysical and cosmological context using joint GW+EM measurements. I will conclude by discussing the lessons that we are learning from this one event and the remarkable opportunities and challenges that have emerged in this new observationally driven and fast-paced field as we move from the discovery era to one of precision astrophysics in the next decade.

Samaya Nissanke is an astrophysicist and the spokesperson of GRAPPA, the center of excellence in gravitation and astroparticle physics, at the University of Amsterdam, the Netherlands. Samaya was born in London, UK and completed her undergraduate and masters in Natural Sciences at the University of Cambridge. She completed her PhD working on gravitational radiation effects for inspiralling compact binaries at the Institut d’Astrophysique Paris (Universite Paris VII) and began working in the nascent field of multi-messenger astronomy during her postdoctoral fellowships at CITA (the Canadian Institute of Theoretical Astrophysics, University of Toronto), NASA’s Jet Propulsion Lab, Caltech, and Radboud University Nijmegen. She was previously an assistant professor at Radboud University before moving to her current position at the University of Amsterdam in 2018. Samaya is passionate about her research in multi-messenger astronomy and gravitational wave physics and about attaining excellence and inclusivity in physics through recruiting and mentoring new generations of scientists from diverse backgrounds. In addition to several prizes awarded as a member of the LIGO Scientific and Virgo Collaborations, Samaya was most recently a recipient of the 2020 New Horizons Prize in Physics awarded by the Breakthrough Prize Foundation.