Presidential Lecture: "A gene that made our brain big" by Dr. Wieland Huttner 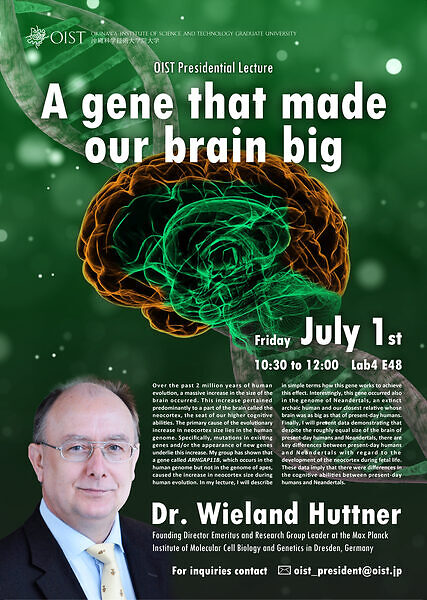 Over the past 2 million years of human evolution, a massive increase in the size of the brain occurred. This increase pertained predominantly to a part of the brain called the neocortex, the seat of our higher cognitive abilities. The primary cause of the evolutionary increase in neocortex size lies in the human genome. Specifically, mutations in existing genes and/or the appearance of new genes underlie this increase. My group has shown that a gene called ARHGAP11B, which occurs in the human genome but not in the genome of apes, caused the increase in neocortex size during human evolution. In my lecture, I will describe in simple terms how this gene works to achieve this effect. Interestingly, this gene occurred also in the genome of Neandertals, an extinct archaic human and our closest relative whose brain was as big as that of present-day humans. Finally, I will present data demonstrating that despite the roughly equal size of the brain of present-day humans and Neandertals, there are key differences between present-day humans and Neandertals with regard to the development of the neocortex during fetal life. These data imply that there were differences in the cognitive abilities between present-day humans and Neandertals.

Dr. Wieland Huttner is the Founding Director Emeritus and Research Group Leader at the Max Planck Institute of Molecular Cell Biology and Genetics in Dresden, Germany.