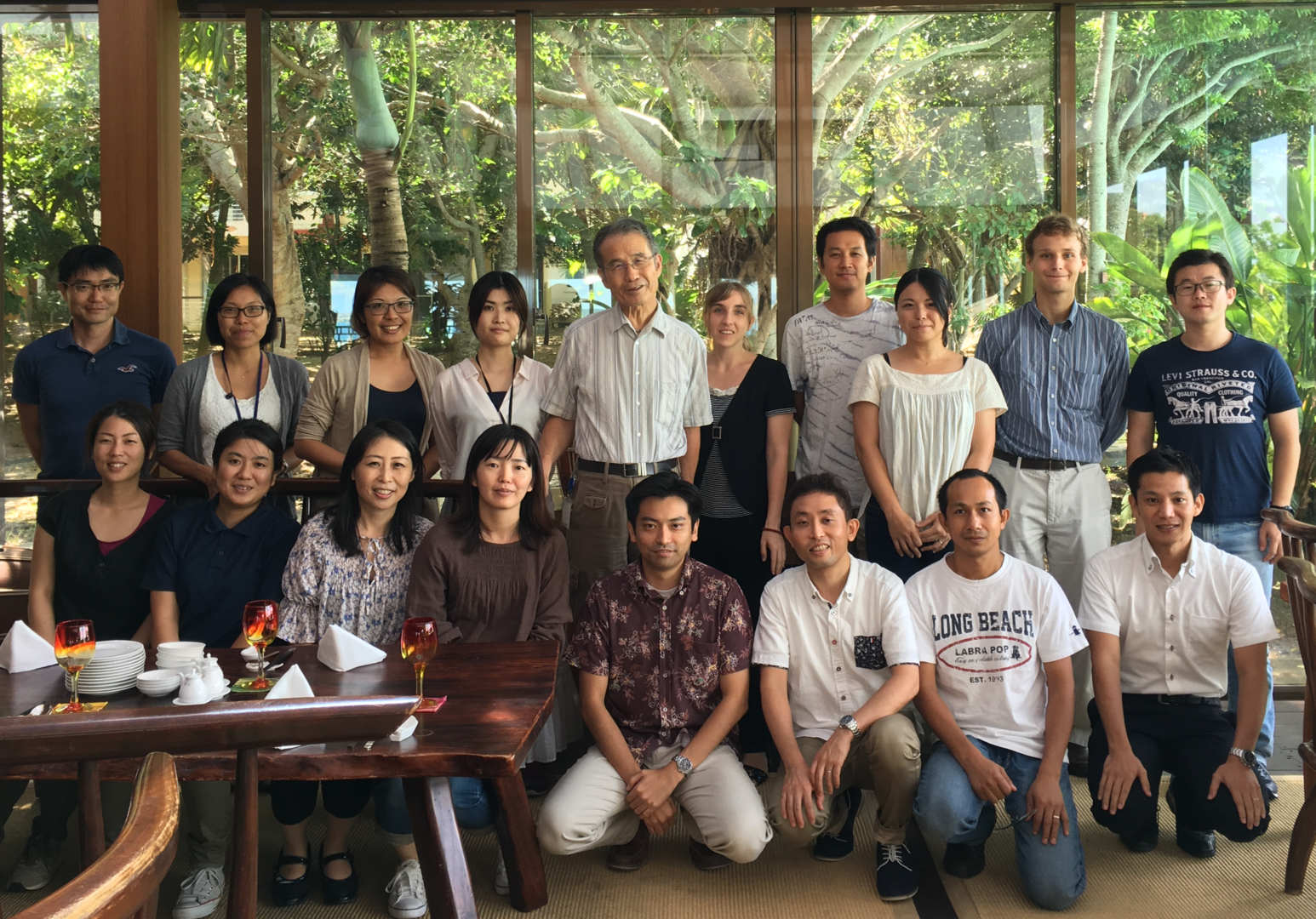 In FY2017, we published original articles on pathways that compensate for choromosome segregation defects identified by whole-genome sequencing of suppressor DNA mixtures, and on genetic defects rescued by rapamycin, as listed in 3. Activities and Findings and 4. Publications.

Suppressor screening is a powerful method to identify genes that, when mutated, rescue the temperature sensitivity of the original mutation. Previously, however, identification of suppressor mutations has been technically difficult. Due to the small genome size of Schizosaccharomyces pombe, we developed a spontaneous suppressor screening technique, followed by a cost-effective sequencing method. Genomic DNAs of 10 revertants that survived at the restrictive temperature of the original temperature sensitive (ts) mutant were mixed together as one sample before constructing a library for sequencing. Responsible suppressor mutations were identified bioinformatically based on allele frequency. Then, we isolated a large number of spontaneous extragenic suppressors for three ts mutants that exhibited defects in chromosome segregation at their restrictive temperature. 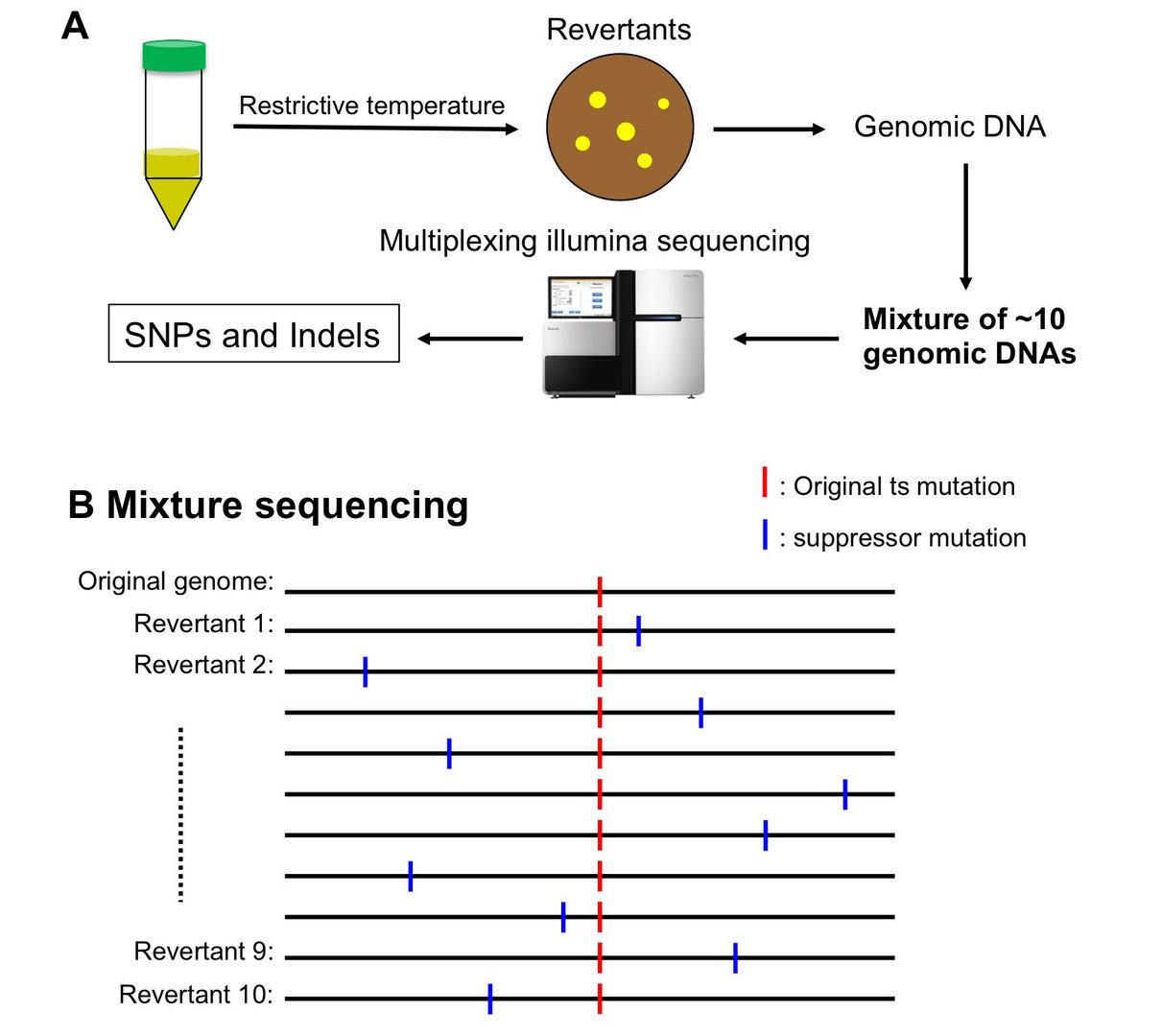 Screening provided new insight into mechanisms of chromosome segregation: loss of Ufd2 E4 multi-ubiquitination activity suppresses defects of an AAA ATPase, Cdc48. Loss of Wpl1, a releaser of cohesin, compensates for the Eso1 mutation, which may destabilize sister chromatid cohesion. The segregation defect of a ts histone H2B mutant is rescued if it fails to be deubiquitinated by the SAGA complex, because H2B is stabilized by monoubiquitination.

Scientists at the Okinawa Institute of Science and Technology Graduate University (OIST) have taken one step closer towards potential cures for several human genetic diseases, and the answers have been found in the humble cells of fission yeast.

Dr. Kenichi Sajiki and the team in Prof. Mitsuhiro Yanagida’s G0 Cell Unit at OIST have uncovered that rapamycin, a biological compound produced by bacteria, is able to “rescue” cells with genetic defects and maintain normal cell function. Their work was published in Open Biology.

Rapamycin is already in common use throughout the medical world as an immunosuppressant – stopping the function of the immune system. As such it is commonly prescribed to patients undergoing kidney transplants to prevent rejection of the new organs. It is also routinely used for cancer treatments, as well as for coating coronary stents. Rapamycin has also generated keen attention due to experiments that showed extended lifespan in mouse cells.

The OIST team has uncovered a new side to rapamycin, paving the way to new medical therapies for genetic diseases.

“This is the first systematic screen to find mutants that can be ‘cured’ by the drug. Previously we knew yeast chromosome diseases were cured by the same drug. Now Sajiki and more than ten authors discovered 12 more yeast gene diseases curable by the same drug,” says Prof. Yanagida.

Rapamycin inhibits cell growth and division – known as proliferation -  by regulating the function of TOR Kinase, a main signaling enzyme that conveys information to the cell about nutritional conditions around it.  The team hypothesized that if rapamycin could restore normal proliferation in cells with mutated DNA, it was possible that the affected genes conserved in humans responsible for genetic diseases could potentially be treated by rapamycin.

The team devised an experiment using fission yeast cells, each of which had a specific mutation in their DNA that created cell division defects when exposed to raised temperatures of 36°C. Testing a library of 1014 mutant strains of yeast. 45 of the mutants were “rescued” by rapamycin addition and began to divide normally once again.

Analyzing the genetic makeup of the rescued yeast cells, the lab team identified 12 different genes that were responsible for the temperature-triggered defects. With the source identified, the team now knew where to look for the answer to rapamycin’s restorative properties.

Adding rapamycin saw these cells function as normal. The scientists observed that rapamycin essentially overrides the aberrant behavior of SAPK mutation so that resulting biochemical production is maintained at normal levels. This controls a delicate balance between SAPK and TOR Kinase that is key to keeping cells growing and dividing normally. Further groups of genes affected by rapamycin in this way include those responsible for cellular functions such as the exchange of chemicals between cells and the regulation of the genetic compound chromatin’s structure. 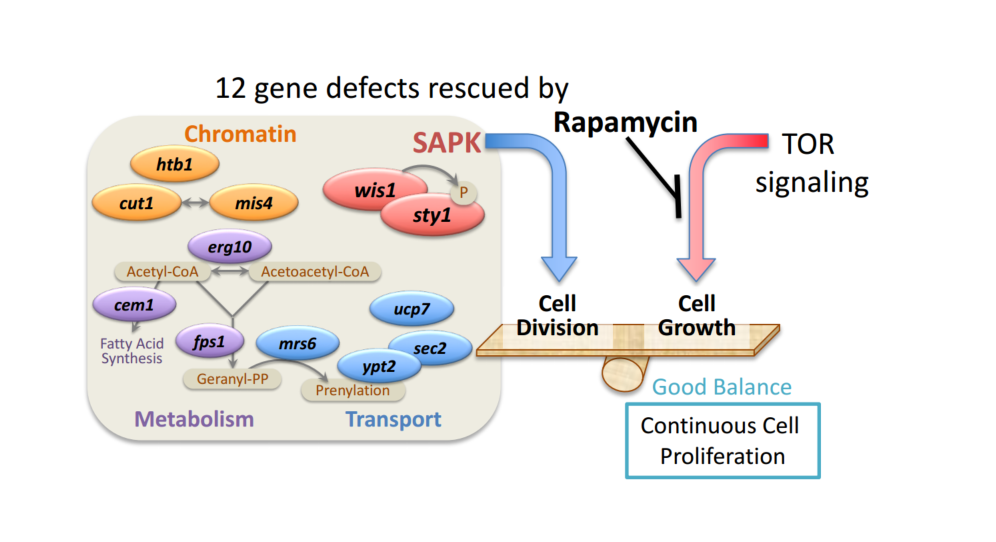 The study is a first step in opening new avenues of research, which could lead to cures for debilitating genetic conditions like Cornelia de Lange syndrome and cognitive development disorders.

Their identification of the method through which rapamycin works adds a critical new dimension to this already highly useful chemical: “We hope this research will give a new insight into how we can apply rapamycin in the future,” says Dr. Sajiki.