The observations of quantized steps in electric conductance have provided important insights into the physics of mesoscopic systems and allowed for the development of quantum electronic devices. Whilst quantized conductance should not rely on the presence of electric charges, it had not been observed for neutral, massive particles. I will report on recent experiments in which we observed quantized conductance in the transport of neutral atoms [1]. We used high-resolution imaging to shape the potential of a quantum point contact and a quantum wire between two reservoirs of quantum degenerate fermionic lithium atoms. I will further report on recent findings in spin and particle conductance measurements through a quantum point contact in a regime of strong atom-atom interactions [2].

We consider a  mixture  of up to six components for a strongly interacting Fermi gases confined to a one-dimensional geometry by in a tight atomic waveguide. The fermions are confined by a harmonic potential in the longitudinal direction and interact by very strong repulsions with the other components of the mixture.  In the limit of infinitely strong repulsions the ground state displays a large degenracy. We use an exact solution to identify  the wavefunction which corresponds to the ground state at finite, large interactions, as well as the excited states. We determine the partial density profiles of each component of the mixture, and find partial spatial separation in the case of an imbalanced mixture.

We further characterize the wavefunctions by their symmetry, introducing a suitable transposition-class sum operator, and we find that the ground state has the most symmetric configuration compatible with its component imbalance,
thus providing an exemple of generalization of the Lieb-Mattis theorem to the case of mixtures of more than two fermionic components. Finally, we obtain the momentum distribution for each component of the mixture and study in particular the high-momentum tails, which are a signature of the strongly correlated regime.

An exciting prospect for quantum simulators is to probe physics that is difficult to compute using analytical methods or classical numerical simulations. An especially compelling direction is to simulate quantum field theory. I will discuss two new approaches in this regard. The first is a quantum simulation of 2+1 dimensional U(1) lattice gauge theory using superconducting fluxonium arrays which allows for non destructive measurements of non local order parameters such as space like Wilson loops and 'tHooft strings. The second is a quantum simulation of the holographic principle for a critical 1+1 dimensional conformal field theory. The method uses an encoding based on Daubechies wavelets and can be realized as a multimode entangled Gaussian state of continuous variable systems using e.g. frequency modes in photonic networks.

Towards understanding the collisional dynamics of cold nanoparticles

Cold collisions of atoms and molecules have attracted great interests for decades. Extensive studies on them have found a wide variety of intriguing applications, including evaporative cooling, tuning interatomic interactions, and associating atoms to form ultracold molecules. Recent advances in optomechanical experiments have realized cooling single nanoparticles to the millikelvin regime, opening the novel possibility of exploring their collisional dynamics at unprecedented low energies. In this talk, I will present the efforts towards the experimental investigation on the cold collisions of nanoparticles.

Maxwell’s equations, formulated 150 years ago, ultimately describe properties of light, from classical electromagnetism to quantum and relativistic aspects. The latter ones result in remarkable geometric and topological phenomena related to the spin-1 massless nature of photons. By analyzing fundamental spin properties of Maxwell waves, we show that free-space light exhibits an intrinsic quantum spin Hall effect—surface modes with strong spin-momentum locking. These modes are evanescent waves that form, for example, surface plasmon-polaritons at vacuum-metal interfaces. Our findings illuminate the unusual transverse spin in evanescent waves and explain recent experiments that have demonstrated the transverse spin-direction locking in the excitation of surface optical modes. This deepens our understanding of Maxwell’s theory, reveals analogies with topological insulators for electrons, and offers applications for robust spin-directional optical interfaces.

Precision measurements – the noisier the better! 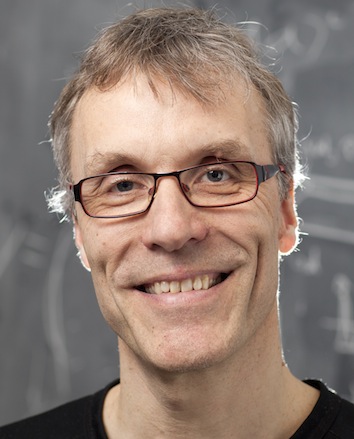 Quantum systems provide time and frequency standards and they can be used as sensitive probes of inertial effects, weak electromagnetic fields, etc. Much effort has gone into the optimization of measurement schemes based on the preparation, evolution and final detection of the state of a quantum system, where, e.g., squeezing and entanglement can be used to reduce measurement uncertainty and hence increase sensitivity.

In this talk, I shall discuss the analysis of a different - but experimentally very common - scheme for precision probing, where one monitors signals emitted from a single quantum system rather than the system itself. This is the typical situation, e.g.,  in spectroscopy, where we can use a quantum optical master equation to obtain the density matrix of the system and predict the mean optical signal properties as function of any system parameter, and thus infer its value from experimental data.

In reality the signal record fluctuates with time, and while this imposes measurement uncertainty, it   also imposes measurement back action. On average, the system that emits the signal is governed by the master equation, but subject to a given detection record, it is constantly “quenched” and obeys a stochastic evolution. I shall present an analysis that takes this “permanently transient” dynamics explicitly into account and which yields much more information than the one based on only mean signal values.

With detection of atomic fluorescence signals as an example, I shall demonstrate how photon counting and homodyne detection yield different sensitivity to the atomic and field parameters, while none of them exceed a general, theoretical sensitivity limit that we shall infer from the general quantum theory of measurements.

Quantum engineering is become a heterogeneous endeavour requiring one to bring together very different types of physical subsystems so as to achieve an overall functionality which is impossible using each subsystem alone. A classic example related towards achieving the DiVincenzo Criteria 6&7 - on interconnecting static and flying qubits.  In this talk we describe how, in theory,  hybrid quantum devices can be designed to be useful for gravimetry, photon quantum non-demolition measurement, and building a quantum network between spatially distant superconducting chips, e.g. a quantum internet. These designs intermix superconducting, optical, solid-state and mechanical quantum subsystems.

Recent experimental developments in Rydberg dressed atoms and ion crystals opening up new platforms to emulate exotic quantum spin models, in particular, frustrated quantum magnets in which the low energy description is provided by gauge fields. We discuss how the building blocks for such spin models can be designed in cold Rydberg gases and ions by engineering the inter-particle couplings via laser fields. Particular examples for the spin-ice models are considered.

In an atomic vapor cell with anti-relaxation coating, the ground state coherence can survive wall collisions of more than thousands of times [1]. This offers unique opportunities for precision spectroscopy and quantum control. I will describe a sub-coherence-lifetime spectroscopy technique [2] that gives a linewidth of 0.2 Hz in such cells and allows for high sensitivity magnetometers. Then, I show how one can use the coherence diffusion or transport [3, 4] to spatially split a laser beam of either a coherent state or a squeezed state [5]. Lastly, using atomic coherence as a mediator, we can effective couple spatially separated light modes, and thus construct a parity-time anti-symmetric optical non-Hermitian Hamiltonian [6]. We demonstrate phase transition behaviors and interesting interference phenomenon in this system.

Analyzing  the  noise  in  the  momentum  profiles  of  single  realizations  of  one-dimensional  Bose gases, we present the experimental measurement of the full momentum-space density correlations, which are related to the two-body momentum correlation function.  Our data span the weakly interacting region of the phase diagram, going from the ideal Bose gas regime to the quasicondensate regime.

We show experimentally that the bunching phenomenon, which manifests itself as super-Poissonian local fluctuations in momentum space, is present in all regimes.  The quasicondensate regime is however characterized by the presence of negative correlations between different momenta, in contrast to Bogolyubov theory for true Bose condensates, predicting positive correlations between opposite momenta. We will present analytical predictions for quasi-condensates, that compare well with the data lying deep into the quasi-condensate regime. Data lying in the crossover between the quasi-condensate and the ideal gas regimes are in good agreement with ab-inhitio Quantum Monte Carlo simulations.

Bose-Einstein Condensation of Photons and Periodic Potentials for Light

Bose-Einstein condensation has been observed in several physical systems, including cold atomic gases, exciton-polaritons, and magnons. Photons usually show no Bose-Einstein condensation, since for Planck’s blackbody radiation the particle number is not conserved and the photons at low temperatures vanish in the system walls. I here describe experiments with a dye-filled optical microresonator experimentally observing Bose-Einstein condensation of photons. Thermalization is achieved in a number conserving way by photon scattering off the dye molecules, and the cavity mirrors provide both an effective photon mass and a confining potential. I will also report on recent work realizing periodic lattice potentials for the photon gas.

In classical hydrodynamics, straight vortices move with the local fluid velocity. This description can be rewritten in terms of forces arising from the interaction with other vortices. Two such positive vortices experience a repulsive interaction and precess in the positive (counterclockwise) sense around their common centroid. A similar picture applies to vortices in a two component Bose-Einstein condensate (BEC) coherently coupled through rf Rabi fields. Unlike the classical case, however, the rf Rabi coupling induces an attractive interaction, and two such vortices with positive signs now rotate in the negative (clockwise) sense. This picture is extended to a single vortex in a two-component trapped BEC (a “half-quantum vortex”). P. Massignan and colleagues at ICFO (Barcelona) are exploring numerical simulations of many of these configurations.

Optical nanofibres (ONFs) have recently emerged as very useful tools for probing and trapping cold atoms, due to the functionality of such fibres in the development of atom-photon hybrid quantum systems.  For example, ONFs have been shown to be highly efficient tools for demonstrating nonlinear optics phenomena in atomic media [1, 2].  This arises from the very high evanescent field intensities that can be achieved due to the very tight light confinement within very small mode areas over the length of the nanofibre.  Exploiting this phenomenon we have studied quantum interference effects using an optical nanofibre surrounded by cold 87Rb atoms via 2-photon processes at 780 nm and 776 nm.  We have observed frequency up-conversion for a 776 nm probe power as low as 200 pW, asymmetric Autler-Townes (A-T) splitting for 20 nW of 780 nm coupling power, and EIT. These power levels are several orders of magnitude lower than those used in free space experiments and provide an all-optical switching technique at the few-photon level.

We also present our recent progress towards ONF-based atom trapping schemes [3,4], which rely on engineering the optical nanofibres by (i) selection of the taper profile to enable higher order mode propagation [3], or (ii) through focussed ion beam milling [4] of nanostructures in the nanofibre.   In one study we consider modal interference in few-mode ONFs in order to generate optical potentials around the fibre.  In another experiment, we have considered atom trapping by removing the central part of the ONF, thereby creating a slot region rendering the system equivalent to two parallel optical waveguides.   This increases the coupling interaction between the fibre-guided modes and atoms near the fibre surface and can also be extended to submicron scale colloidal particle trapping.

Towards the investigation of collective scattering in nanofiber-trapped atomic ensembles

Jin-Shi Xu, University of Science and Technology of China, China

Towards Coherence Measurements of Rydberg Atoms with All-Optical Detection

Generation of a planar squeezed state in a cold atomic ensemble

Manipulating the Squeezing Properties of a Degenerate Parametric Amplifier with Coherent, Time-Delayed Feedback

A Quantum Optomechanical Interface in the Unresolved Sideband Regime

Uncertainty limits of the Poincaré sphere

Irreversible entropy production in mesoscopic quantum systems out of equilibrium

Dark soliton like excitations in a disk shaped Bose-Einstein Condensate

Magnetic Resonance at the Quantum Limit

Non-linear optomechanical coupling of a membrane to a cavity