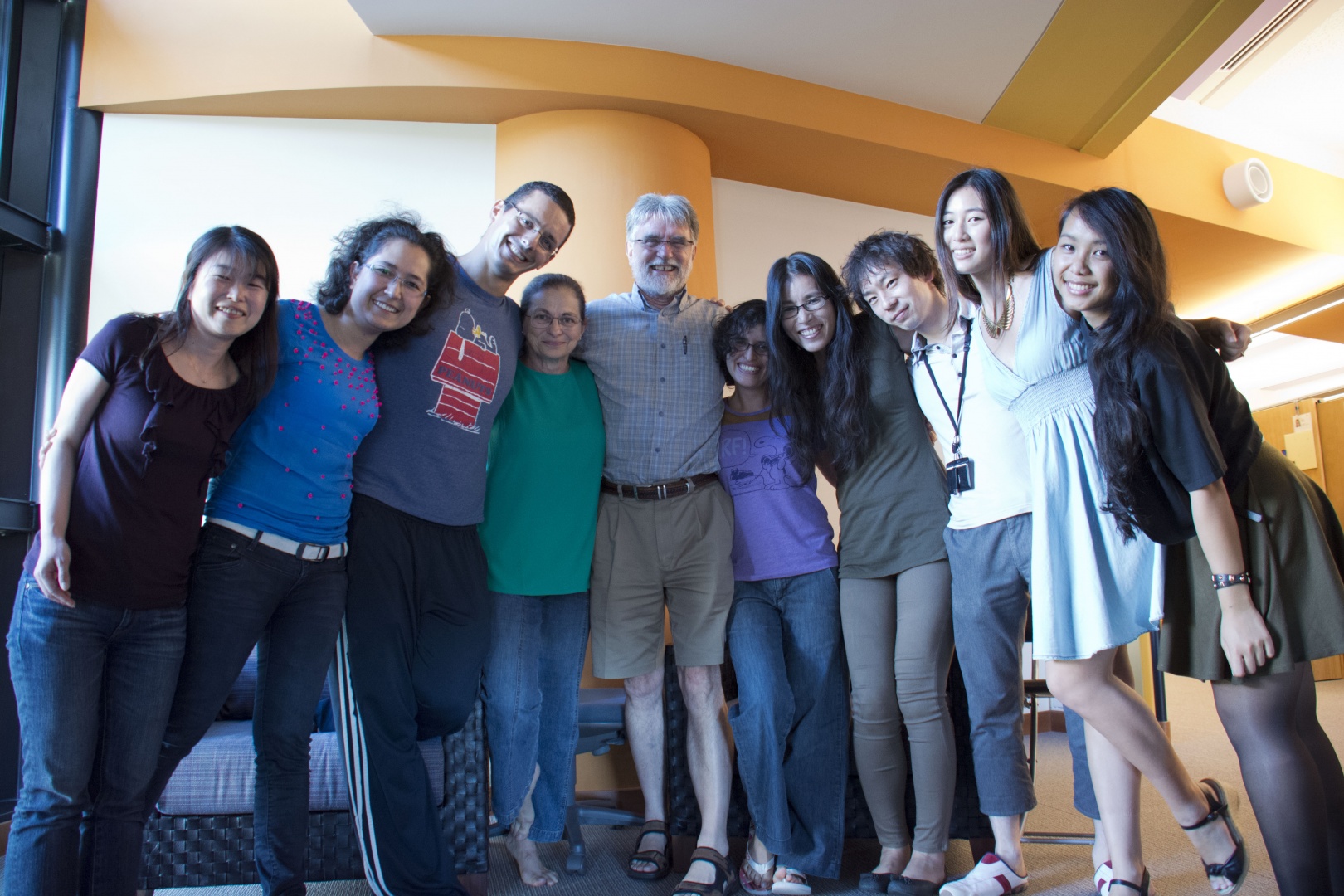 In 2013 the Brain Mechanisms for Behaviour Unit is now made up of six individuals. The addition of Ms Yoko Nakano, a research technician, has greatly increased the group’s productivity especially in immunohistochemistry. She has also been instrumental in the development of viral vectors for our first steps in optogenetics and in genotyping the new transgenic animal colonies.  In this endeavor we have had a great deal of help from Dr Michael Lazarus and his team from University of Tsukuba, Japan. Much of our results have depended on his generous supply of AAV vectors with channel rhodopsin plasmids included. Dr Violeta Gisselle Lopez-Huerta has been working on the new CRE mice as well as single cell recording in slices from animals injected with channel rhodopsin containing viruses. Dr Omar Jaidar has been using optogenetic stimulation in striatum of freely moving animals and has seen dramatic changes in behavior.  We are now comparing behavioural changes in mice with and without nigral dopaminergic depletion.

Dr Takuya Hikima now has extended his study of presynaptically silent synapses awakened by an action of PKA, by use of a new fluorescence marker for glutamate release. This year Dr Marianela Garcia-Munoz has re-established her expertise in behavioural analyses with several studies on mice behavior in the ‘9-hole’ box designed in Cambridge by Prof. Trevor Robbins. She has preliminary evidence of differences in response between transgenic mouse strains. Dr Garcia-Munoz has also completed studies of drug effects in cultured cortical and striatal cells. Moreover, she has been strongly occupied this year with the writing of manuscripts. Several papers are in process of being published. Hermina Nedelescu initiated studies in the group as part of a JSPS scholarship on the neuroanatomy of the cerebellum. Nilupaer Abudukeyoumu is hoping to do her Ph.D. research in the Unit.

The collaborative work with several scientists in different countries has been fruitful as well. Collaboration with Dr Beulah Leitch of the University of Otago, New Zealand, resulted in the graduation of now Dr Olga Shevtsova.  We are in process of arranging to co-supervise another Ph.D. student in the coming year (2014 start). Prof Wing Ho Yung was invited to prepare a summary of our earlier work about the importance of cortical activation in Deep Brain Stimulation, which was published in JAMA Neurology. It was accompanied by a complimentary published comment from the editor and has been well received.

Collaboration with Professor William Staines from the University of Ottawa, Canada and Stephan Theiss (Heinrich Heine University of Dusseldorf, Germany) continues as a valuable source of ideas.

The main cause of Parkinson’s disease is degeneration of dopamine (DA) containing neurons that send inputs to caudate-putamen (striatum), the largest nucleus of the basal ganglia. Loss of DA is associated with Parkinsonian symptoms such as impairment of movement initiation, abnormal gait, muscle rigidity and resting tremor. The severity of symptoms is closely associated to the amount of DA loss.

Striatum integrates signals from cortex and thalamus (see section 3.1) and is the initiation point for two pathways that ultimately project to the internal segment of the globus pallidus (GPi) and susbtantia nigra reticulata (SNR). GPi and SNR project to thalamus. SNR also connects to the pedunculopontine nucleus (PPN) and the superior colliculus (SC).  These connections provide an important influence by way of the thalamus (see section 3.2) on cortical pyramidal tract neurons and on the locomotor mesencephalic area and reticular system via PPN. Moreover, connections to the superior colliculus provide the motor information to swiftly link auditory, visual and somatosensory information to confirm orientation in space.

The importance of the cortical and thalamic inputs on striatal function cannot be stressed enough. We have studied neurotransmitter release from corticostriatal terminals and their participation in an important plastic mechanism called synaptic awakening (see section 3.3). Moreover we have studied the relation of these corticostriatal synapses with glia and the role of extrasynaptic NMDA glutamate receptors (see section 3.4).

When years ago I measured the loss of synapses from the lesioned side of DA depleted animals we saw a marked reduction that seemed likely at the time to be from cortical synaptic input to the striatum (Ingham et al. 1989).  However, subsequent neuropathology suggested that thalamic cells were lost in Parkinsonian patients therefore the loss of synapses we observed might have included thalamic terminals. We used the opportunity of an invitation to the triannual Dopamine Symposium (2013) to test the possibility of a thalamostriatal synaptic loss.  Since Dr. Jáidar was using animals with 6-OHDA lesions for his studies we stained striatal tissue from those mice with the specific marker for thalamic terminals- an antibody to vesicular glutamate transporter 2 (vGluT2). It seemed from the first five animals that there was no change in numbers of synapses, we presented those results at the meeting Figure 1. To our surprise, at the conference we learned that Prof Gloria Meredith had tested the same idea and agreed with our results (Zhang et al. 2013). 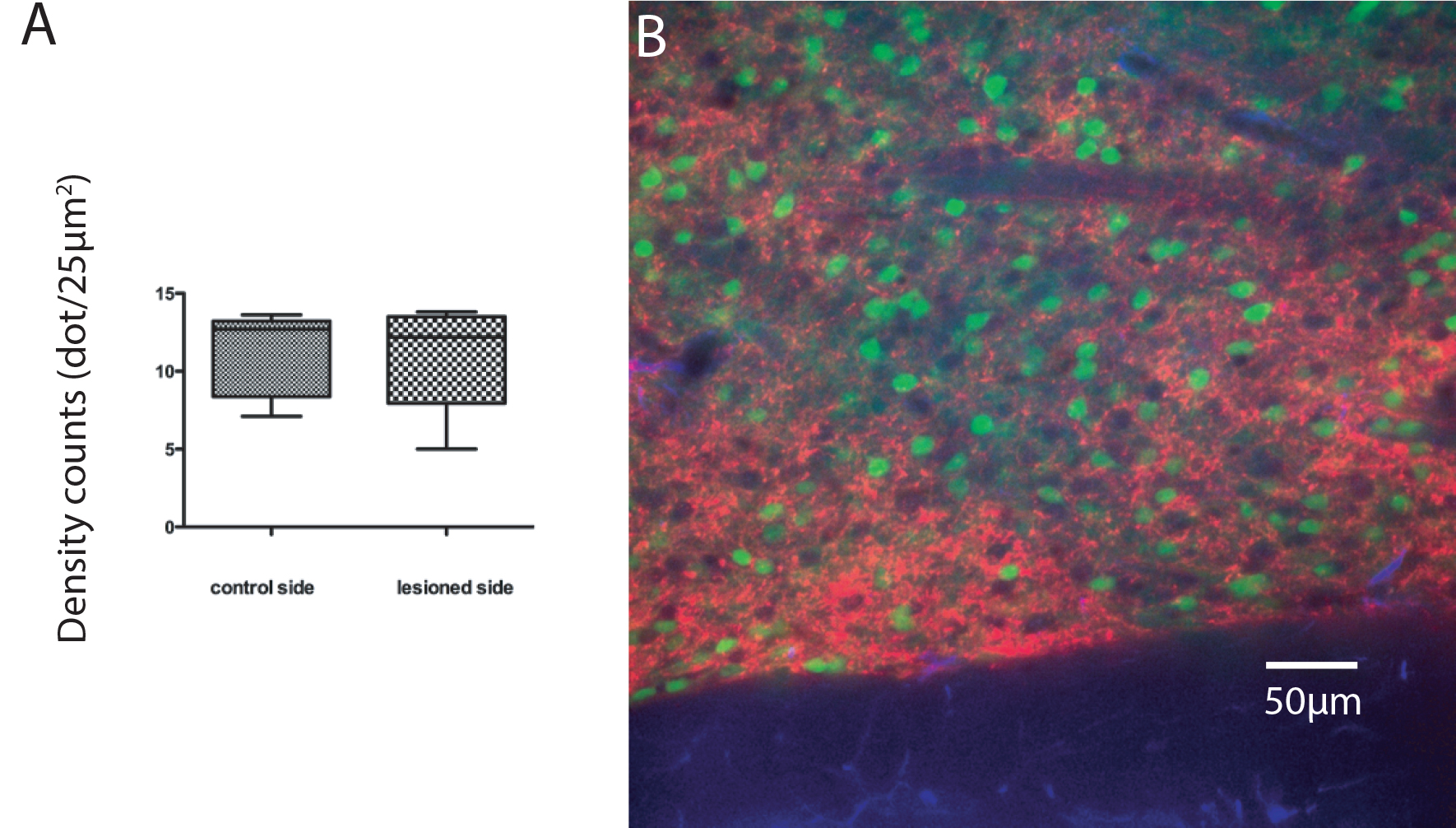 FIGURE 1. There is no loss of thalamic synapses following DA depletion.  A. Box plots of synaptic density counts on striatal tissue from animals with unilateral injections of 6-OHDA (median ± 75% error). There was no detectable difference in these samples.  B shows the kind of photomicrograph on which the numbers were counted.  Thalamostriatal terminals are red (vGluT2 staining). The animal was a DA D2 eGFP transgenic animal so striatal DA D2 containing cells are green. The blue staining is glial fibrillary acid protein (GFAP) used to mark reactive astrocytes to locate the injection site (in this picture only the meninges and blood vessel walls are stained).

3.2 The thalamocortical output from the basal ganglia

When I first described the basal ganglia output to the cortex from the thalamic nucleus in 1983 I knew that it was important in the generation of the turning behavior that characterized successful dopamine depletion in rats (Garcia-Munoz et al. 1983).

Later we obtained clear evidence that this output projected only to layer 1 of the cortex (Arbuthnott et al. 1990), an area that at that time was decidedly refractory to physiological study, since it consisted only of mixed axons and dendrites. Now that we can use genetic targeting of channel rhodopsin and calcium indicators to individual nuclear outputs in brain, the problem is at least in principle solvable.  With the students from Erasmus MC University Medical Center, Rotterdam, Sui Chin and Neyerilla Lie Fong who visited for a few months we explored the thalamocortical output in mice. 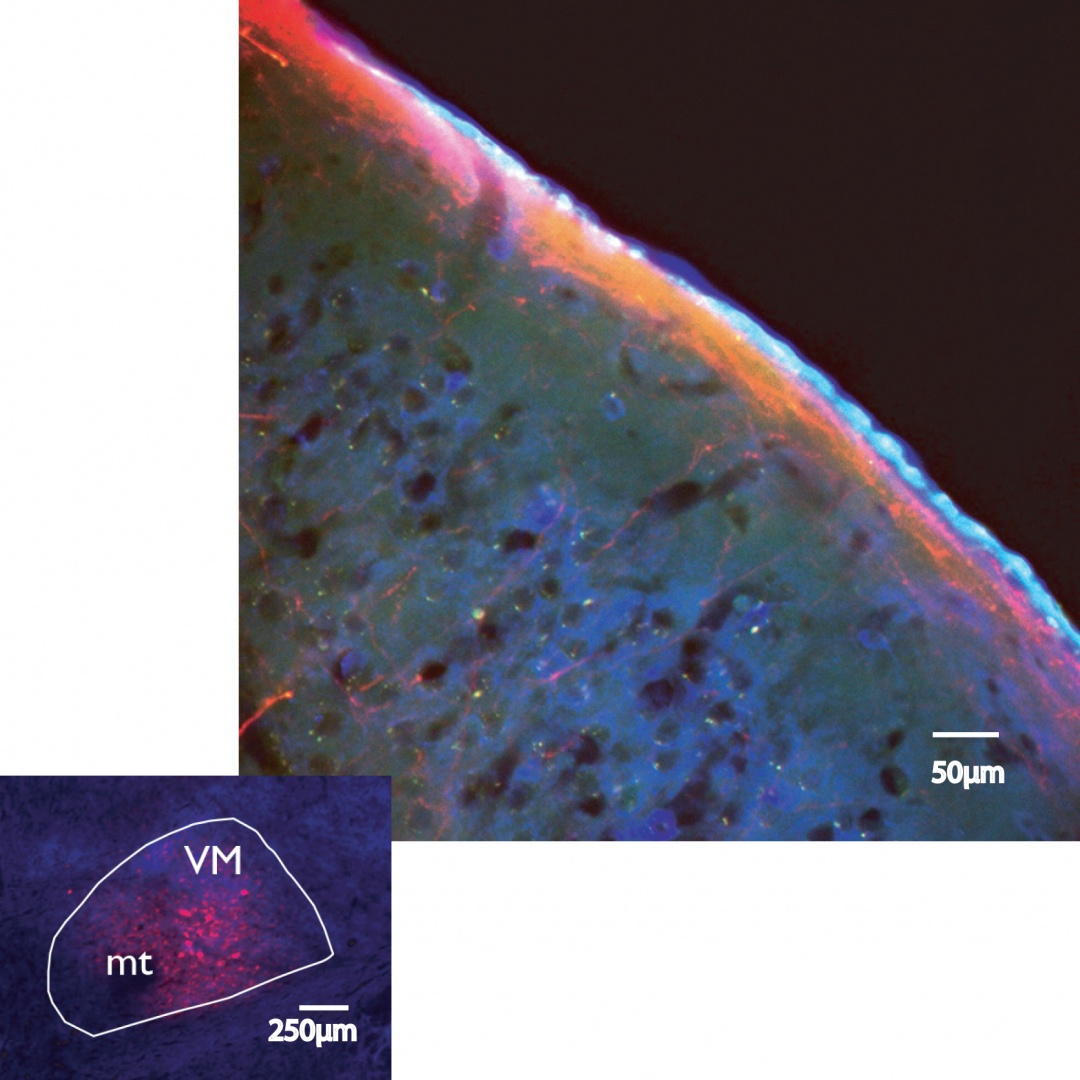 FIGURE 2 Study of thalamic axons along cortical layer I.  Top. Red thalamic fibres fill layer 1 in a section from a mouse brain cerebral cortex.  Red is mCherry expressed along with channel rhodopsin 2 (ChR2) in the axons of originating in thalamus. Blue is staining GAD67 an enzyme involved in GABA synthesis. The bright light blue edge of the section is the outer layer of epithelial cells between brain and cerebrospinal fluid called pia mater. Bottom. A successful injection in VM, the mamillothalamic tract is marked ‘mt’, and the nucleus outline is drawn round the GAD67 staining in blue.  Red cells express turbo red and GCamp6. Terminals from such injections fill layer 1 of the cortex and have very few other terminal sites.  Our first images of the terminals from these injections in living mice reveal very small synaptic specializations in layer 1.

Meanwhile, in collaboration with the Optical Neuroimaging Unit under Prof Bernd Kuhn we have begun to image the activity in layer 1 using 2-photon microscopy in head-fixed awake mice.  The small size of the VM nucleus in these animals has forced Dr Omar Jaidar to refine the stereotaxic technique and virus delivery in targeting both channel rhodopsin and G-Camp6 to the cells.

Following on the preliminary results obtained by from Ms Sakurako Watanabe’s (OIST graduate rotation student), Ms. Nilupaer Abudukeyoumu (another OIST graduate student) and Dr. Garcia-Munoz both have evidence that inhibition of the glial glutamate uptake system (GLT-1) with dihydrokainate results in distinct increases in the response of cortical neurons in culture. 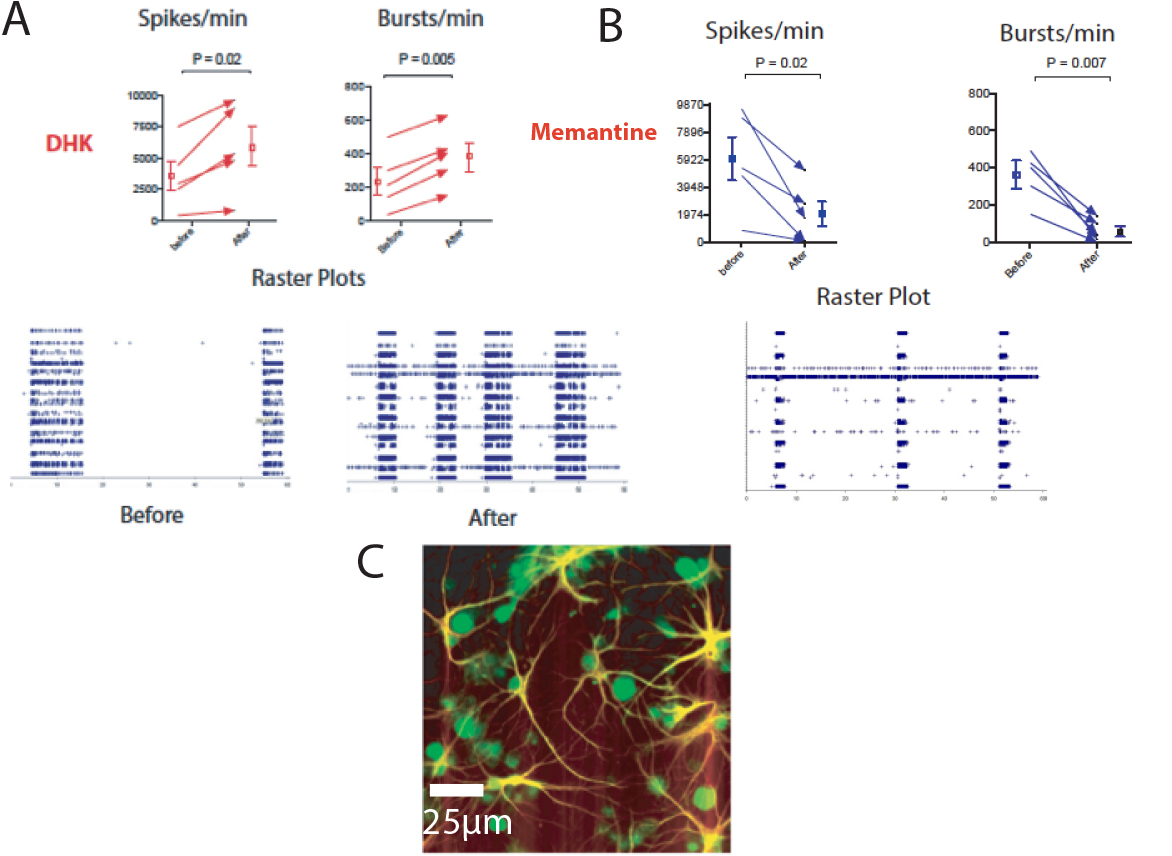 FIGURE 4 Inhibition of glial glutamate uptake increases electrical activity of cultured cortical neurons. A. Graphs illustrating an increase in the number of spikes and bursts per minute following dihydroxykainate (DHK). Bellow, raster plots from multielectrode array (MEA) recorded activity  (blue) before and after the drug. B. These changes seem to be, at least in part, the consequences of glutamate spillover to extrasynaptic receptors since memantine -at doses that block extra-synaptic NMDA glutamate receptors- reduces the increases caused by blockade of glial uptake with DHK. The photomicrograph (C) shows astrocytes stained with GFAP (yellow) and neurons (green) in a typical culture.

“Dealing with the devil in the detail: Some thoughts about the standard model of the basal ganglia”.
Keynote Lecture at Asia-Pacific Center for Theoretical Physics and Korean Advanced Institute of Science and Technology: APCTP -KAIST Young Computational Neuroscientist Workshop, KAIST Dogok campus, Seoul, South Korea (2013).

“How many of those are there? Some thoughts about quantitative neuroanatomy”
Molecular Neuroanatomy Course, OIST (2014).

This has been the first full year of teaching in OIST. I have been involved in two courses:

Title: Role of basal ganglia pathways in initiation and performance of action sequesnces