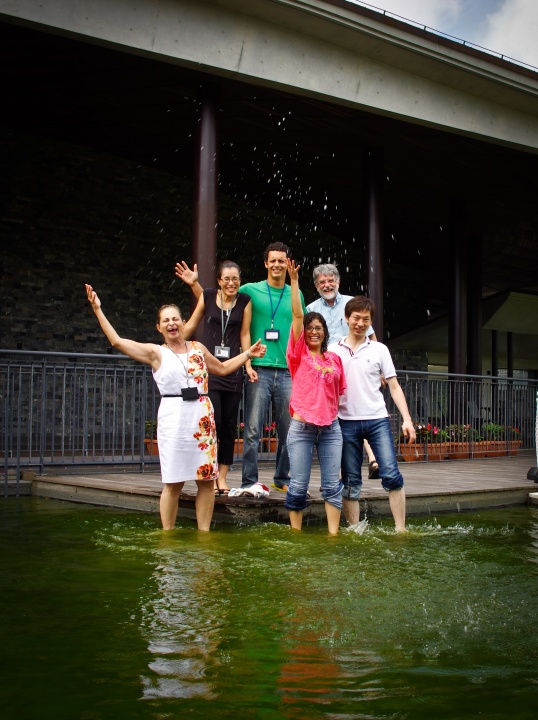 In 2011, the Brain Mechanisms for Behaviour Unit faced staffing changes with a decrease of postdoctoral researchers for several months and an increase again at the end of 2011. The Unit is currently made up of five individuals. The emphasis has shifted slightly as the Unit has expanded to also work on brain slices in addition to cell culture systems. The Unit’s preliminary results on single cells recordings in mixed corticostriatal cultures were published this year.  Although the recordings were a success, the results documented in the cultures, a connection from striatal to cortical neurons – that never happens in brain. Dr. Marianela Garcia Munoz perfected a technique that avoids that issue. The initial results utilizing the new method were presented at the International Brain Research Organization (IBRO) conference in Florence, Italy in July 2011. Dr. Violeta Lopez Huerta and Dr. Omar Jaidar joined the Unit in August and December 2011 respectively, resulting in a noticeable increase in productivity. Dr. Takuya Hikima applied a novel method for examining presynaptic processes in cortical terminals and has demonstrated an action of protein kinase A (PKA) on the likelihood of release from individual terminals.
The collaborative work with several scientists in different countries has been fruitful as well. A collaboration with Professor Brian Hyland from the University of Otago, New Zealand, during his sabbatical in OIST, resulted in the publication of a paper which was awarded the Otago School of Medical Sciences (OSMS) Best Paper award for 2011 (Journal of Neuroscience 2011, 31, 6098-107).
Professor William Staines from the University of Ottawa, Canada worked with the Unit for three weeks in the spring.  His work resulted in improvements in our immunohistochemistry that made it possible for Mr. Neil Dalphin (undergraduate University of Otago) to get some promising results during his student internship at OIST from November to February.
Teamwork between our Unit, Dr. Stains’ and Dr. Stephan Theiss’ (Heinrich Heine University of Dusseldorf, Germany) resulted in the paper on cortical development published at the end of 2011.

The main goal within the different experiments carried out by the Unit (in slices or cultures; pre- or postsynaptic neuronal activity) is to dissect the pharmacology and physiology of the actions of dopamine on the basal ganglia network activity.
We have built on the success of the cortical and striatal separated cultures and this year we have begun to look at cortical and thalamic neurons cultured in a similar way.  We hope to assemble in vitro different parts of the basal ganglia to achieve controlled conditions in which to study the networks that make up these important structures. 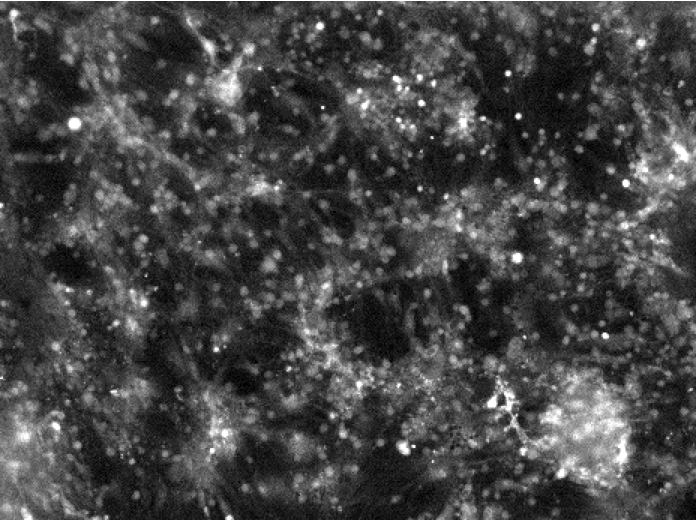 Figure 1.
Cells were loaded with the calcium indicator Fluo5N (Invitrogen) and imaged at the region of the interplay between cortical and thalamic neurons. The dye is brighter in the presence of more calcium. The bright flashes, apparent in the video, represent the consequences of bursts of action potentials allowing increases of intracellular calcium.  These flashes are perhaps the cellular equivalent of the bursts seen in these structures in brain during anaesthesia or sleep when the input is reduced. The small white dots (about 15 µm across) are neurons. The time in the video is about 3x real speed.

3.2 Electrical activity in similar paired cultures (as seen in Figure 1) is also spontaneous and synchronous. 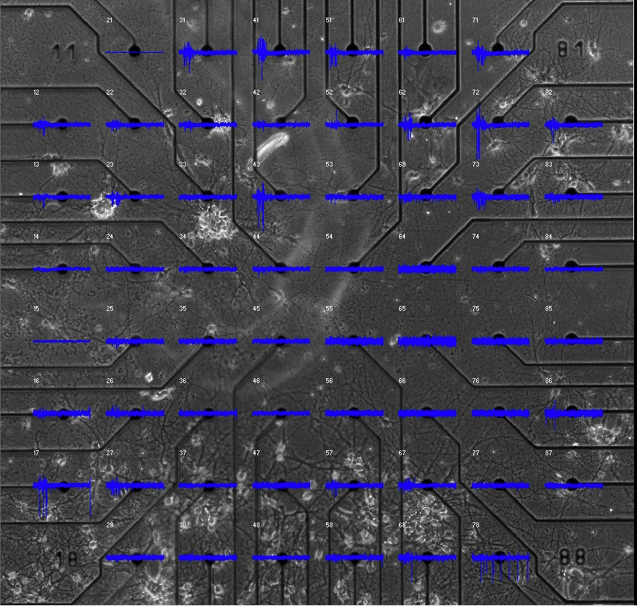 Figure 2.
In this image, thalamic cells are in the lower half of a Multi-Electrode Array (MEA) plate with cortical neurons in the upper electrodes. The microphotograph of the cells plated on the sixty electrodes has been displayed under the electrical recording grid. The electrical activity for 0.5 seconds is displayed above each electrode in blue. The larger vertical lines on the traces are action potentials recorded from neurons in the immediate vicinity of the electrodes.  Each electrode records from many cells, however, they can potentially be separated so that the individuals can be distinguished.  Even at this increased time resolution it is hard to be sure, where the activity starts.

Cryopreserved neurons from E14-16 embryonic mice were plated in three different compartments. Once the neurons settled, the compartments were removed and the cells allowed to develop connections.

Figure 3.
Photomicrographs from individual areas of a multi compartment co-culture of neurons. The green dye stains microtubule-associated protein (MAP2) present in neuronal dendrites.  The blue staining is the vesicular transporter for GABA (vGAT) and marks both inhibitory cells and axon terminals in all three compartments.  Also visible in all compartments is the thalamic axon terminal field stained red due to the presence of vGluT2 the vesicular glutamate transporter in thalamic terminals.  The presence of the red dots in all three compartments is evidence of innervation of all areas by axons from the thalamic cells.

Dr. Violeta Lopez Huerta has been contributing to the work that Dr. Luis Carrillo Reid did, before his departure, on cortical cultures (Figure 4) and also in some pharmacological experiments on the cortico-striatal system in culture and in slices. 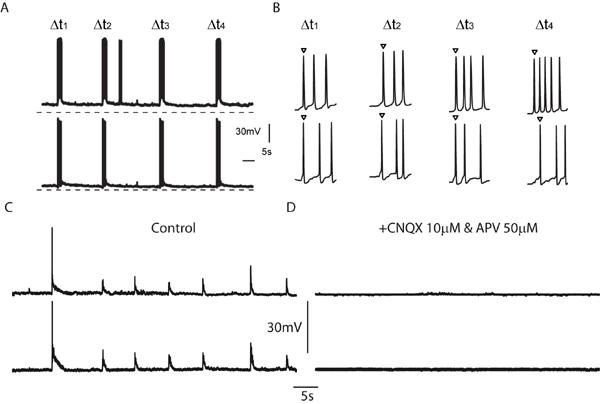 Figure 4.
This figure shows the neuronal synchronization observed in cortical cultures. A. Recordings of spontaneous voltage responses in a pair of neurons reveal that bursts of action potentials occur in a highly synchronized fashion. B. Close up of the initial part of the bursts also illustrates synchronization of single spikes. C. Subthreshold voltage responses indicate that both cells receive the same synaptic input. D. The subthreshold responses can be blocked with glutamate receptor antagonists.

Evidence from previous work from ourselves and others suggests that the major action of dopamine is upon corticostriatal synapses, however the action could be presynaptic as well as postsynaptic. Methods to study presynaptic release on these small terminals in brain are few and challenging.  Previously, Dr. Takuya Hikima studied presynaptic release of the granule cells terminal field in CA3 (mossy fibres) using the fluorescent marker synaptopHluorin expressed in transgenic mice. The hippocampal anatomical arrangement of these fibres probably contributed to the large signal observed at that time. Working with corticostriatal cells, Dr. Hikima discovered that this system has a low signal-to-noise ratio. He needed to induce many action potentials in the terminals to be able to see release. However, such long trains of action potentials would themselves change synaptic efficacy. He therefore has applied a new method: he generated a plasmid encoding synaptophysin and the pH-sensitive green fluorescent protein (synpHlourin) and cloned that into a lentiviral vector to infect cortical cells in culture. Using this preparation, he has now been able to observe fluorescent signals with only 5 action potentials, and to detect the known actions of protein kinase A (PKA) on the vesicular dynamics.  He is now exploring ways with which he can transfect cortical cells in vivo so that we can use his new probe in brain slices. 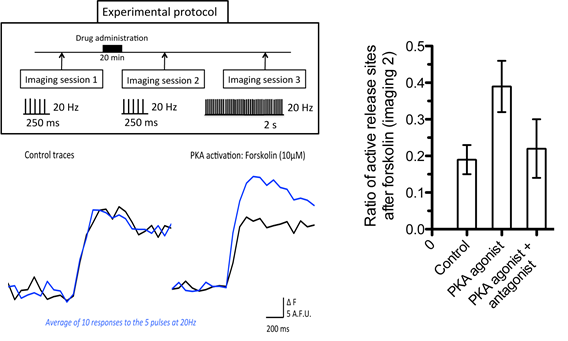 Figure 5.  Changes in fluorescence (ΔF) of evoked exocytosis in cortical neurons in culture. As illustrated in the experimental protocol, between imaging sessions 1 and 2 the protein kinase A (PKA) agonist (forskolin 10µM) or control solution was applied in the bath for 20 minutes. The traces are the average response to a set of 5 pulses at 20Hz for 250 ms delivered ten times at 0.2 Hz.  Black traces represent imaging session 1 and blue traces illustrate the average response in imaging session 2. Imaging session 3 stimulates the preparation with 40 pulses (20Hz/2s) to obtain an estimate of all possible release sites (not shown). Only areas with more than twice baseline fluorescence were considered as actively releasing.  The histogram indicates the ratio of the changes in fluorescence relative to imaging session 2 (i.e., ΔF of imaging session 2/ ΔF of all areas >2x baseline fluorescence).  Activation of PKA signal transduction cascade with forskolin (10µM) resulted in an increase in release and an increase in active release sites relative to controls. The PKA antagonist Kt5720 (200nM) blocked the effect of forskolin. The error bars represent the SEM of measurements for 4 different cultures.

The final publication from Dr Cyril Dejean’s time in New Zealand suggests that the rhythms seen in the basal ganglia slow wave electrical activity are embedded in a much slower oscillation that influences both the phase and amplitude of oscillations in globus pallidus and striatum.  The origin of this activity is not known and has not been detected before. Frequency and phase of the oscillations can be influenced by dopamine receptor activation.
With Dr Beulah Leitch we continue to collaborate on the electron microscopic localization of proteins in the brain.  Our most recent study in the ‘stargazer’ mouse suggests that the absence epilepsy that these animals display may be a consequence of the blockade of glutamate GluR4 receptors specifically on the corticothalamic synapses in the reticular nucleus of thalamus. This nucleus is the major source of inhibition in thalamus and therefore the decrease in its activation might lead to hyper-responsiveness in thalamo-cortical networks. The thalamic hyper-responsiveness could lead to the epileptic absence periods characteristic of this type of mutant mice.  A manuscript with a description of these results is in press in Neuroscience.

This continuing long-term collaboration has produced very interesting neurohistochemical results. Dr Sarah Schock and Prof Staines are on the author list of two out of three of our publications on the subject and we have another in preparation. The thalamic cells that we have begun to culture (Figures 1-3) were dissected by them and frozen by QBM CellScience (Prof. Anthony Krantis, Chief Executive Officer) and shipped to Okinawa from Canada.  We prepared more of those cells as well as the more usual cortex and striatal cells while I visited the University in March.  The collaboration with Ottowa University also includes some future challenges such as solving the problems of transfecting cryopreserved neurons.  We also continue to work with the “Global Network for Brain Reconstruction”.