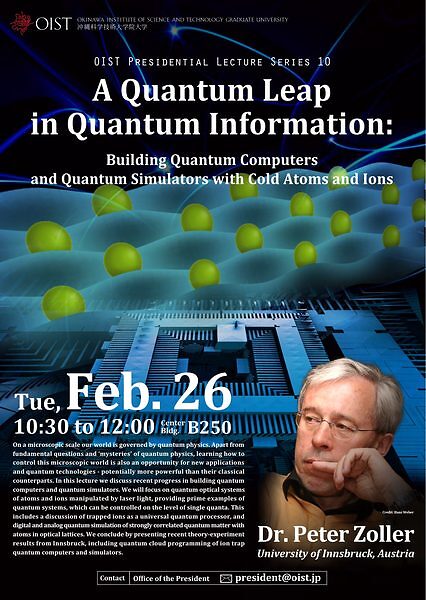 On a microscopic scale our world is governed by quantum physics. Apart from fundamental questions and ‘mysteries’ of quantum physics, learning how to control this microscopic world is also an opportunity for new applications and quantum technologies - potentially more powerful than their classical counterparts. In this lecture we discuss recent progress in building quantum computers and quantum simulators. We will focus on quantum optical systems of atoms and ions manipulated by laser light, providing prime examples of quantum systems, which can be controlled on the level of single quanta. This includes a discussion of trapped ions as a universal quantum processor, and digital and analog quantum simulation of strongly correlated quantum matter with atoms in optical lattices. We conclude by presenting recent theory-experiment results from Innsbruck, including quantum cloud programming of ion trap quantum computers and simulators.

Professor of Physics with tenure, Institute for Theoretical Physics, University of
Innsbruck, Austria, vice dean of studies (2001-2004), Head of the Institute of Theoretical
Physics (1995-1999)