The interest of this research is located in applied mathematics and addresses intriguing questions that can be formulated as inverse problems, in particular tomographic 3D reconstruction, and regularization techniques. Besides the theoretical work, it also involved in technology and software development in our unit.

This is an ongoing research of Dr. Gunnar Wilken in proof theory focuses on both familiar and new ordinal notation systems and their combinatorial properties as objects in discrete mathematics. These investigations are inspired by Kurt Gödel’s program of using large cardinal axioms to solve mathematical incompleteness. Following this rationale, Dr. Gunnar Wilken has been analyzing patterns of resemblance, which were discovered by Timothy J. Carlson (Ohio State University), who made me aware of the ultimate connection between ordinal notations and axioms of infinity.

Further work in computability theory done in collaboration with Andreas Weiermann  was centered around Gödel’s system T of  primitive recursive functionals of finite type in the lambda-calculus formulation.

In recent years a wide range of bacteria has become resistant to more and more different types of antibiotics. As a result has finding new ways of fighting bacterial infections become an important global health issue. Since a large number of antibiotics are directly or indirectly involved in inhibiting cell division, it is evident that a better understanding of the dynamics of the cell division process is of great importance.

The E. coli cell division machinery (the divisome) is composed of > 30 different proteins that assembles at the midcell each round of division. The average generation time of fast growing cells is on the order of 20 minutes, making the divisome an extremely complex and highly dynamic multi-component structure.

In our unit we use super-resolution structured illumination microscopy (SIM), cryo-electron tomography (cryo-ET) and correlative cryo-fluorescence and cryo-electron microscopy (cryo-CLEM) to better understand the structural arrangement of the E. coli divisome during different stages of division, knowledge that in the end may lead to the identification of new target proteins that can aid the development of novel antibiotics.

Recent findings from our group include that the core divisome proteins are organized in multiple layers and that, once the division is over, the divisome disassembles in a multistep manner. 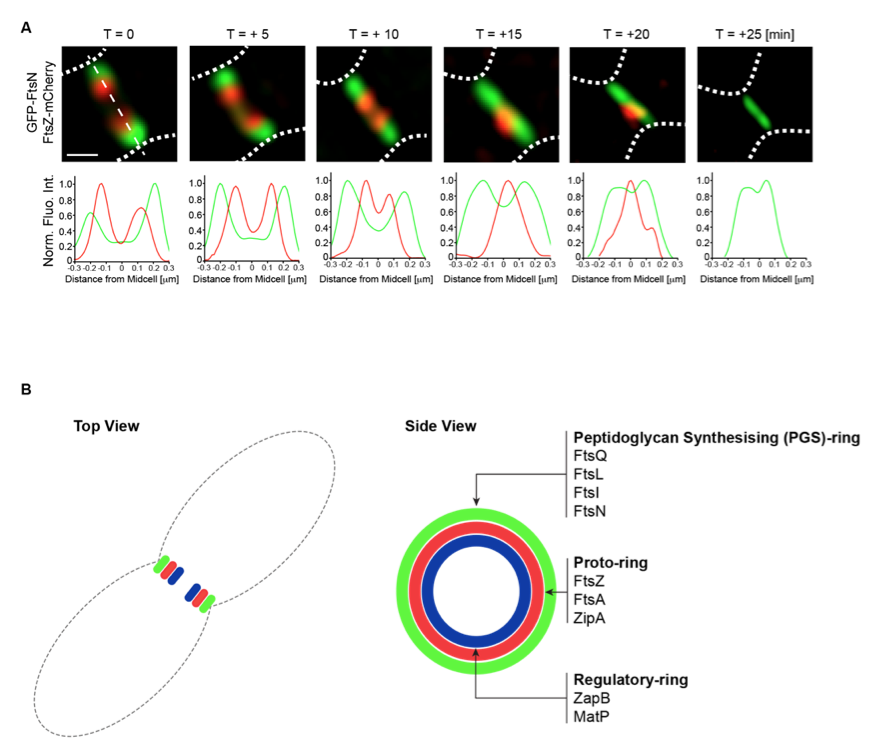 A, GFP-FtsN is localized outside FtsZ-mCherry throughout the constriction process.

B, The divisome is made up of concentric ring, listed are the proteins that are known to localize in a specific ring (Curr. Gen. 2016).

Additionally, we have recently shown that FtsZ does not generate force large enough to initiate membrane constriction in vivo. We also for the first time at an ultra-structure scale showed that complete maturation (as judged by the arrival of FtsN to the midcell) of the divisome is a prerequisite for membrane constriction.

The overall goal is to at a molecular level describe the dynamics of the divisome. If we learn how it assembles, what forces that drives constriction of the membranes and finally how it disassembles we might be able to figure out new ways to stop it, and stopping it would mean that the cells will not able to divide and multiply (i.e. spreading infection).

Schematic representation of the disassembly of a subset of the divisome proteins, a process that occupies roughly 15 % of the total cell cycle (Mol. Micro. 2016).

Determination of the structure of the full length Glucocorticoid Receptor

The glucocorticoid receptor (GR) is highly abundant in virtually all cells through out the human body. This receptor is a clinically very important molecule as it is intimately involved in the signaling pathways of human glucocorticoids, of which the most important is cortisol. Furthermore the wide use of synthetic glucocorticoids (e.g. hydrocortisone) are highly attributed to their anti-inflammatory function and are currently used to treat a broad range of inflammatory diseases such as asthma, allergies and rheumatoid arthritis. Though use of glucocorticoids is beneficial as anti-inflammatory agents in the short run, they can pose a serious complications concerning long term usage that includes e.g. immunosuppression, fluid shifts and even brain changes that ultimately may cause psychological changes in the patient.  Thus it is desired to manufacture a synthetic glucocorticoid that have all the beneficial features of todays drugs but that is not interfering with the immune system causing the secondary auto immune responses of current available alternatives.

Therefor a deeper understanding of the dynamics of GR acquired from high resolution 3 dimensional structural data will be of much value not only for the research community but also for the pharmaceutical industry and ultimately also for the general population. Consequently our aim is to provide the first full length 3 dimensional structure of the glucocorticoid receptor.