In the past year we have focused on the description of quantum thermodynamics properties in strongly correlated atomic systems, spin-orbit coupling in interacting systems, impurity dynamics in ultracold quantum gases, properties of atoms close to optical nano-fibers and several other topics.

In collaboration with the group of Prof. Schmelcher at Hamburg University in Germany we have investigated the correlated quench induced dynamical dressing of a spinor impurity repulsively interacting with a Bose-Einstein condensate. Inspecting the temporal evolution of the structure factor, three distinct dynamical regions were found upon increasing the interspecies interaction. These regions are related to the segregated nature of the impurity and to the Ohmic character of the bath. We were able to show that the impurity dynamics can be described by an effective potential that deforms from a harmonic to a double-well one when crossing the miscibility-immiscibility threshold. We further illustrate that for increasing interaction an orthogonality catastrophe occurs and the polaron picture breaks down. In that case a dissipative motion of the impurity takes place leading to a transfer of energy to its environment. This process signals the presence of entanglement in the many-body system. 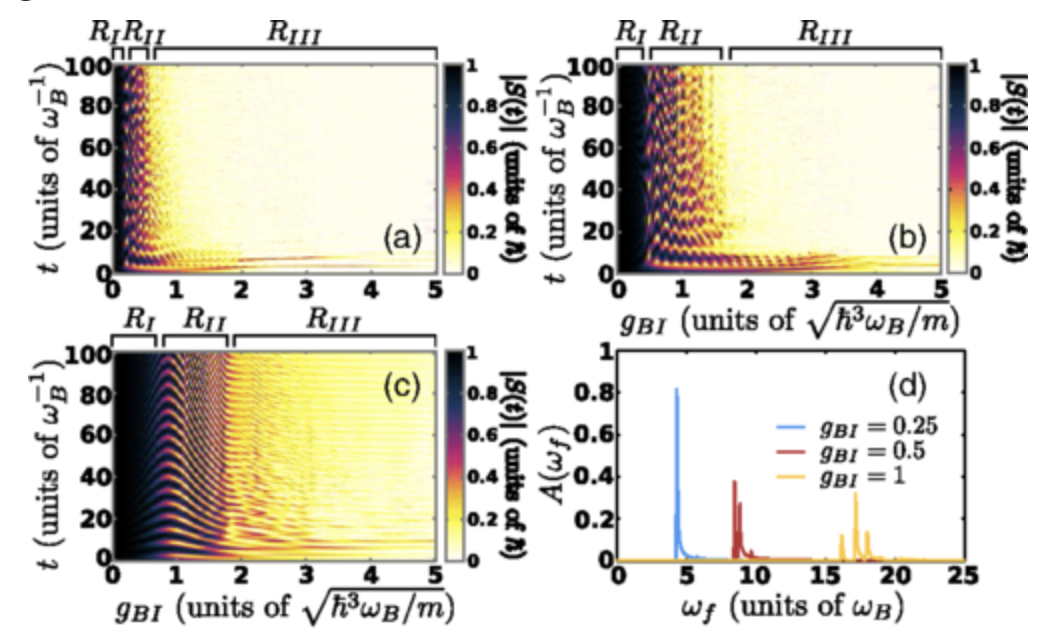 We have investigate a small vortex-lattice system of four corotating vortices in an atomic Bose-Einstein condensate and found that the vortex dynamics display chaotic behavior after a system quench introduced by reversing the direction of circulation of a single vortex through a phase-imprinting process. By tracking the vortex trajectories and Lyapunov exponent, we have shown that the onset of chaotic dynamics is not immediate, but occurs at later times and is accelerated by the close approach and separation of all vortices in a scattering event. The techniques we have developed could potentially be applied to create locally induced chaotic dynamics in larger lattice systems as a stepping stone to study the role of chaotic events in turbulent vortex dynamics.

Figure:  Histograms of the positions of each vortex in the x-y plane, tracked over an evolution time of 20 s in the corotating frame. The vortex in the lower left has been annihilated by phase imprinting and reimprinted with (a) the same and (b) the opposite direction of rotation, exactly on the vortex core.  (a) For four vortices with the same circulation direction, regular trajectories at constant radius appear, while in panel (b), disordered vortex trajectories can be seen.

3.3 Torque of guided light on an atom near an optical nanofiber 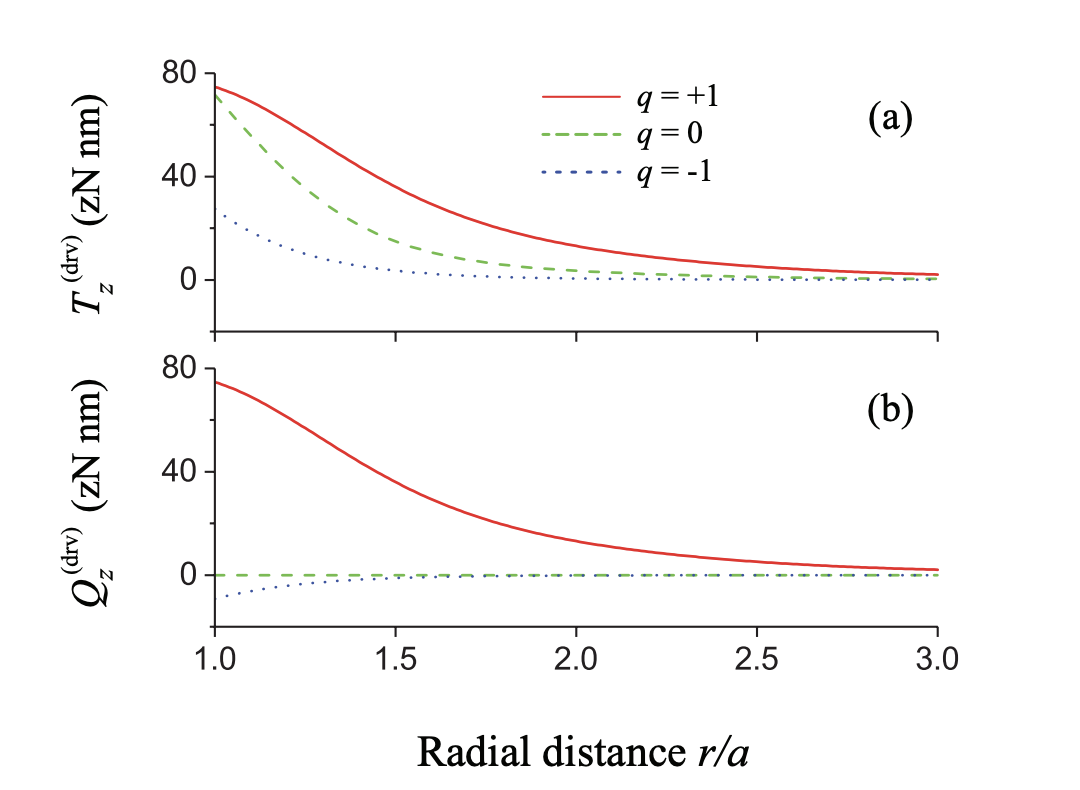 Figure:  Radial dependencies of the (a) orbital and (b) spin torques of the guided driving field on the atom being at rest and in the steady state. The dipole matrix-element vector d has only one nonzero spherical tensor component dq, where q = 1, 0, and −1. The driving field is in a quasicircularly polarized HE21 mode. All other parameters are given in the publication.

We have studied how to efficiently control an interacting few-body system consisting of three harmonically trapped bosons. Specifically, we have investigated the process of modulating the inter-particle interactions to drive an initially non-interacting state to a strongly interacting one, which is an eigenstate of a chosen Hamiltonian. For unbalanced subsystems, where one can individually control the different inter- and intra-species interactions, we have found complex dynamics originating from when the symmetry of the ground state was broken by phase separation. Since the driving the dynamics too quickly can result in unwanted excitations of the final state, we have also optimized the driven processes using shortcuts to adiabaticity, which are designed to reduce these excitations at the end of the interaction ramp, ensuring that the target eigenstate is reached.

Figure:  Target one-body density matrices represented by white contour lines on top of final ones for three identical particles. Panels (a–c) correspond to the shortcut protocol, while panels (d–f) correspond to the reference pulse. Panels (a) and (d) are for a final interaction strength of gf = 1, (b) and (e) for gf = 5, and (c) and (f) for gf = 40. 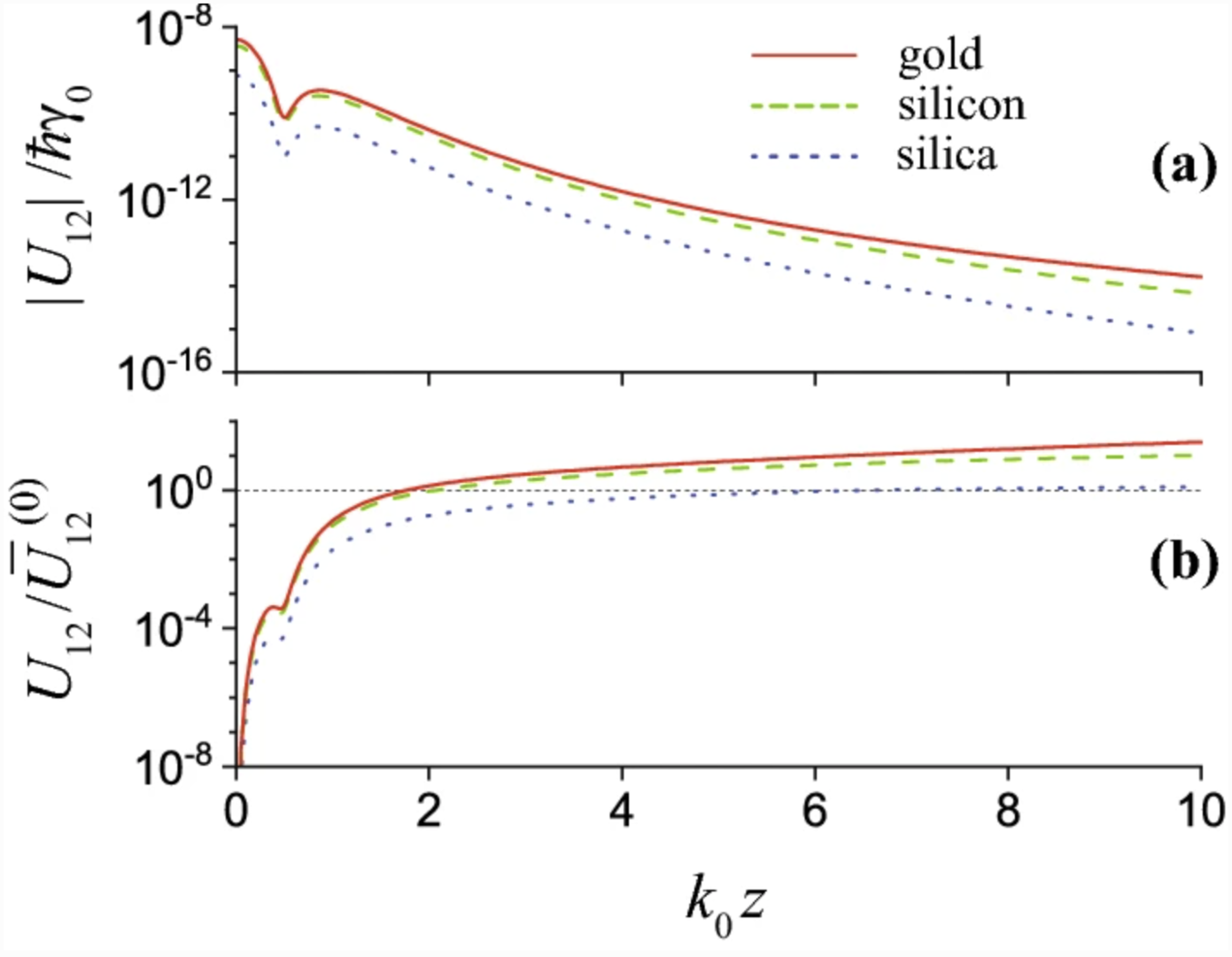 Figure:  Normalised absolute value of the waveguide-mediated dispersion potential (a) and ratio with the the dipole-orientation-averaged vacuum dispersion potential (b) as a function of the distance between the atoms near an infinitely long cylinder made of gold (solid red lines), silicon (dashed green lines), and silica (dotted blue lines).

A system of three trapped ultracold and strongly interacting atoms in one-dimension can be emulated using an optical fiber with a graded-index profile and thin metallic slabs. While the wave-nature of single quantum particles leads to direct and well known analogies with classical optics, for interacting many-particle systems with unrestricted statistics such analoga are not straightforward. Here we have studied the symmetries present in the fiber eigenstates by using discrete group theory and shown that, by spatially modulating the incident field, one can select the atomic statistics, i.e., emulate a system of three bosons, fermions or two bosons or fermions plus an additional distinguishable particle. We have also shown that the optical system is able to produce classical non-separability resembling that found in the analogous atomic system.

3.7 Spin-orbit coupling in the presence of strong atomic correlations

In collaboration with Dr. S. Campbell at University College Dublin and Prof. S. Gardiner at Joint Quantum Centre (JQC) Durham-Newcastle, we have explored the influence of contact interactions on a synthetically spin-orbit coupled system of two ultracold trapped atoms. Even though the system we have considered is bosonic, we were able to show that a regime exists in which the competition between the contact and spin-orbit interactions results in the emergence of a ground state that contains a significant contribution from a anti-symmetric spin state. This ground state is unique to few-particle systems and does not exist in the mean-field regime. The transition to this state is signalled by an inversion in the average momentum from being dominated by centre-of-mass momentum to relative momentum and also affects the global entanglement shared between the real- and pseudo-spin spaces. Indeed, competition between the interactions can also result in avoided crossings in the ground state which further enhances these correlations. However, we find that correlations shared between the pseudo-spin states are strongly suppressed due to the spin-orbit coupling and therefore the system does not contain spin-spin entanglement.

Figure: Population of each pseudo-spin state of the ground state for (a) weak interactions and (b) strong interactions.  The insets show the population of the symmetric state (red line) and the anyti-symmetric state (pink dotted line) using the left axis and the interaction energy (black dashed line) using the right axis.  (c) Population differenceof the ground state as a function of spin-orbit coupling stength and intercomponent interaction strength.  Only positive values, where the anti-aligned states dominate, are shown.

Together with the group of Prof. P. Schmelcher from Hamburg University we have studied the ground state properties and non-equilibrium dynamics of two spinor bosonic impurities immersed in a one-dimensional bosonic gas upon applying an interspecies interaction quench. For the ground state of two non-interacting impurities we have revealed signatures of attractive induced interactions in both cases of attractive or repulsive interspecies interactions, while a weak impurity–impurity repulsion forces the impurities to stay apart. Turning to the quench dynamics we have inspected the time-evolution of the contrast unveiling the existence, dynamical deformation and the orthogonality catastrophe of Bose polarons. We have found that for an increasing postquench repulsion the impurities reside in a superposition of two distinct two-body configurations while at strong repulsions their corresponding two-body correlation patterns show a spatially delocalized behavior evincing the involvement of higher excited states. For attractive interspecies couplings, the impurities exhibit a tendency to localize at the origin and remarkably for strong attractions they experience a mutual attraction on the two-body level that is imprinted as a density hump on the bosonic bath.

3.9 Orthogonality Catastrophe as a Consequence of the Quantum Speed Limit

6.1.1 Noise-stabilised particle transport and exotic-state preparation via shortcuts to adiabaticity

6.1.3 Decoherence and preparation of macroscopic quantum superposition in cavity QED

6.1.4 Quantum droplet formation and dynamics in a one-dimensional dipolar ferrofluid

6.1.6 A spin heat engine coupled to a harmonic-oscillator flywheel

6.1.7 Comparing the cost of quantum control