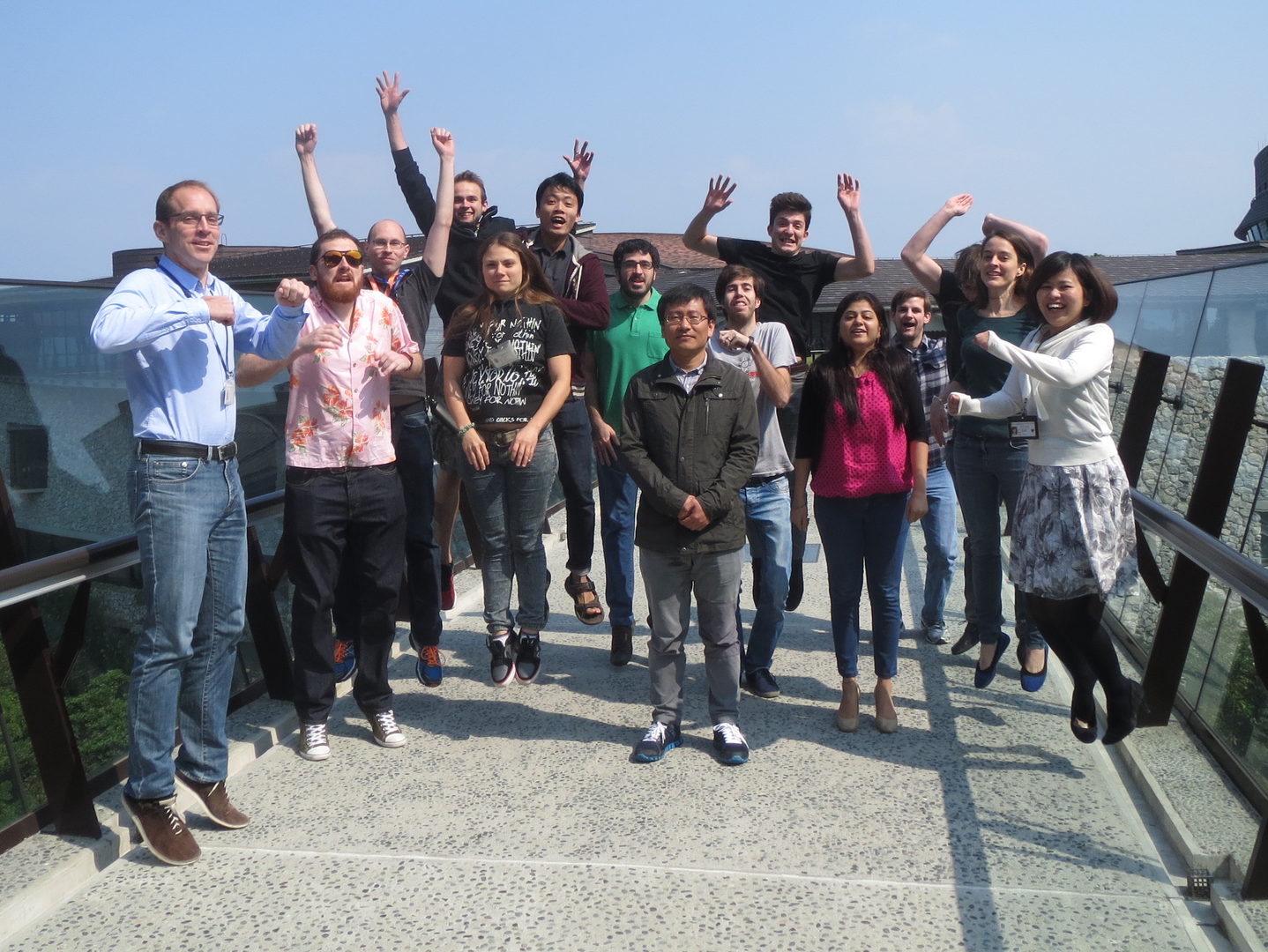 In the past year we have focused on vortex dynamics in Bose-Einstein condensates, quantum engineering of ultracold atom systems through shortcuts to adiabaticity, the description of quantum thermodynamics properties in strongly correlated quantum systems, spin-orbit coupled BECs and several other topics.

Together with Andreas Ruschhaupt and Anthony Kiely from University College Cork we have proposed a method to create higher orbital states of ultracold atoms in the Mott regime of an optical lattice. This can be done by periodically modulating the position of the trap minima (known as shaking) and controlling the interference term of the lasers creating the lattice. These methods are combined with techniques of shortcuts to adiabaticity, and as an example of this, we have shown how to create an anti–ferromagnetic type ordering of angular momentum states of atoms. The specific pulse sequences are designed using Lewis–Riesenfeld invariants and a four-level model for each well. The results have been compared with numerical simulations of the full Schrödinger equation. 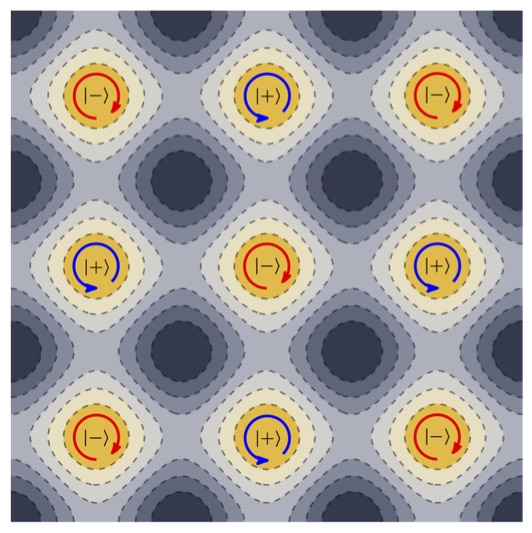 Figure: Diagram of the final state of each atom in the lattice. Each site contains one atom with ± 1 quantum of angular momentum in an anti-ferromagnetic type ordering.

Adiabatic techniques are known to allow for engineering quantum states with high fidelity. This requirement is currently of large interest, as applications in quantum information require the preparation and manipulation of quantum states with minimal errors. To this aim, techniques for the preparation of spatial states through adiabatic passage have been developed, which can be applied to matter waves in external potentials (such as cold atoms or electrons) and to classical waves in waveguides (such as light or sound). Together with Andrew Greentree (from the Royal Melbourne Institute of Technology) and Ricard Menchon-Enrich, Jordi Mompart, and Verònica Ahufinger (from the Universitat Autònoma de Barcelona) we have written a comprehensive review on the recent progress on developing of such techniques, particularly focusing on three-state systems.

Figure: Sketch of the three-level model approximation used to describe a single quantum particle in a triple-well potential to which spatial-adiabatic techniques are applied.

Necklace-like states composed of azimuthally periodic density modulation along a ring geometry have been proposed and experimentally observed in non-linear optical systems. We have examined immiscible two dimensional toroidally trapped Bose-Einstein condensates with Rashba-type spin orbit coupling and find that they support stable necklace-like solutions as well, with the number of petals composing the necklace depending linearly on the spin-orbit coupling strength. In the miscible regime we find that toroidally trapped spin-orbit coupled Bose-Einstein condensates exhibit homogeneous density distributions around the ring with a unit winding number difference between each component.

Two component condensates subject to rotation promise intriguing quantum dynamics and unique ground states, driven by the competition between interaction and rotational energies. We have investigated the phase diagram of toroidally trapped two-component Bose-Einstein condensates and shown the existence of a regime of radially phase separated ground states that can be reached by imposing a difference in rotation on the two superfluid components. This radial phase separated state exists in both the miscible and immiscible interaction regimes.

Figure: Density distributions of the two-components for different differences in the angular momentum per component. The emergence of radial phase separation can be seen.

Artificial gauge fields are versatile tools that allow to control the dynamics of ultracold atoms in Bose-Einstein condensates. Here we have investigated a method of artificial gauge field generation stemming from the evanescent field of the curved surface of an optical nanofibre. The exponential decay of the evanescent fields leads to large gradients in the generalized Rabi frequency and therefore, in turn, to generation of geometric vector and scalar potentials. We have performed numerical simulations of two-dimensional GPE using the artificial gauge fields originating from the fundamental HE11 mode, and found that they lead to the generation of vortex rings. Due to versatility of the light fields in the nanofibre, such a system can be thought of as a highly controllable laboratory for topological excitations in BECs. 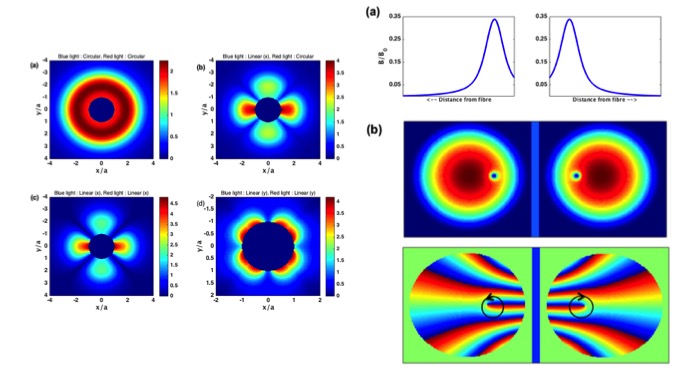 Figure: (left) artificial B fields created by a two-coloured light field as a function of the different polarisations. (right) Density distribution and phase of the condensate, clearly showing the vortex induced by the artificial B field. The B field distribution in the radial direction is shown in the top plots.

We have investigated the ground state properties of ultracold atoms with long range interactions trapped in a two leg ladder configuration, in the presence of an artificial magnetic field. Using a Gross-Pitaevskii approach and a mean field Gutzwiller variational method, we have explored both, the weakly interacting and the strongly interacting regime, in the presence of artificial magnetic field. We have calculated the transition boundaries for the Density-wave - supersolid and Mott-insulator - superfluid phases, as a function of magnetic flux within the mean field theory. In addition we have also performed numerical calculations using cluster coupled mean field theory, and verified the analytical calculations. Our numerical calculations point out the possibility of a supersolid phase, which is characterized using the momentum distribution profiles. 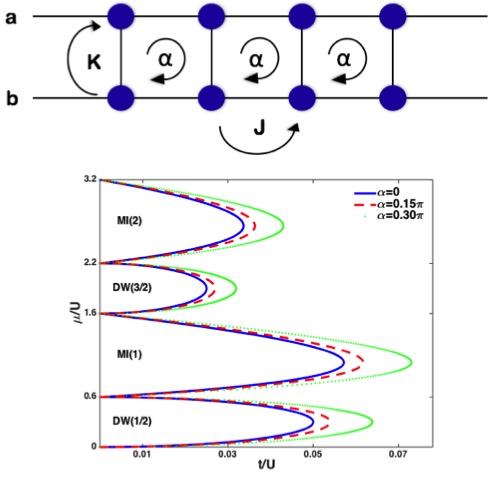 Figure: Schematic of the setup (upper) and phase diagram of the system (lower)

3.7 Interaction induced effects on Wannier functions and its consequence on calculation of Bose Hubbard parameters

n this project, we have studied the effects of onsite repulsive interactions on the broadening of site localized Wannier functions used in the calculation of the parameters of a Bose Einstein condensate in an optical lattice. We have done this by replacing the Wannier functions, which do not contain any information about the interactions, by a two particle wavefunction, based on a calculation with an interaction potential. These interaction dependent basis functions are then used to compute the hopping rate J, the on-site interaction strength U in the Bose Hubbard model and the pair tunnelling strength, which becomes non-negligible. The new Bose Hubbard parameters are found to be substantially different, both at low and high lattice depths, from the ones calculated with single particle Wannier functions. The results based on this approach show that the density effects are not neglectable for many parameter ranges, with possible application in explanation of non-uniform atomic clock shift observed recently.

Figure: Single particle Wannier function compared to the interaction broadened one (left) and parameters of the new Bose-Hubbard model as a function of the lattice depth (right).

6.7 A voyage through turbulence: from classical to quantum physics

6.8 Spin squeezing via interaction with a driven, dissipative ancillary system

6.9 Reflecting on an alternative quantum theory, and its analog in optics