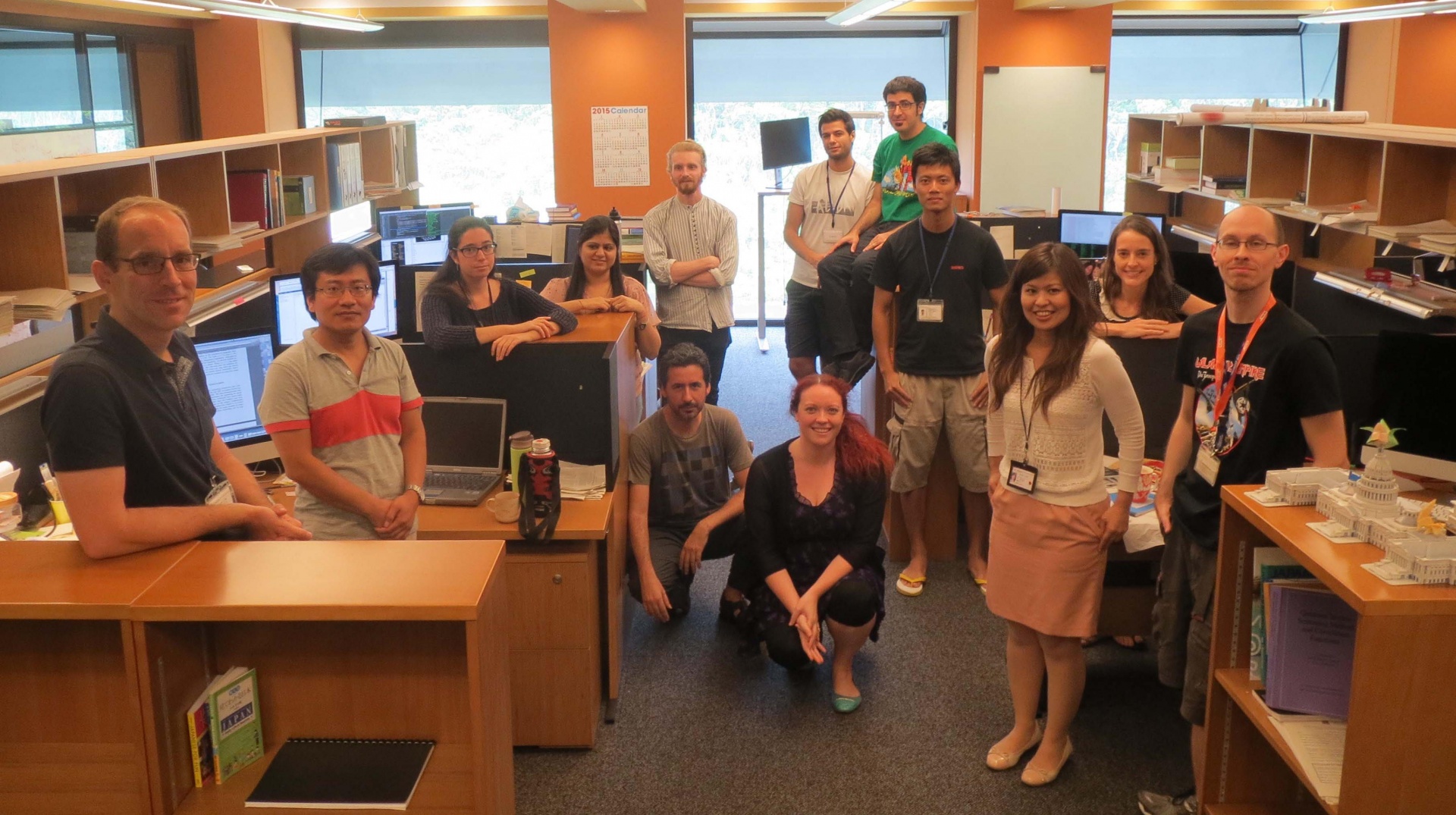 Out work has in the recent year focused on two main strands. One deals with the superfluid properties of  Bose-Einstein condensates, in particular in relation to controlling vortex and persistent flow states , and the other looks at the developement of techniques to control strongly correlated quantum systems. At the same time we are still working on ideas relating to quantum hybrid systems, quantum walks, and spin-orbit coupling physics.

Phase transitions can modify quantum behavior on mesoscopic scales and give access to new and unusual quantum dynamics. In this project we have investigated the superfluid properties of a rotating two component Bose-Einstein condensate as a function of changes in the interaction energy and in particular through the phase transition from miscibility to immiscibility. We have shown that the breaking of one of the hallmarks of superfluid flow, namely the quantisation condition on circulation, is continuous throughout an azimuthal phase separation process and displays intriguing density dynamics. The resulting currents are stable for long times and possess a phase boundary that exhibits classical solid body rotation, despite the quantum nature of superfluid flow. To support this co-existence of classical and quantum behavior the system develops a unique velocity flow profile, which includes unusual radial flow in regions near the phase boundary.

Figure: Decomposition of the condensate velocity into (a) azimuthal and (b) radial components. The development of a radial component is required to adjust the 1/r velocity profile to allow solid body rotation.

Quantum information processing requires control over the quantum state of interacting particles to a high degree of fidelity. This is also an important ability to have in the quest for understanding fundamental properties of non-classical states. We have studied a system of two ultra-cold bosons in a triple well, and shown that, thanks to the inter-particle interaction, isolated energy bands appear that allow to easily generalize known single-particle techniques. We have demonstrated this for the well known spatial adiabatic passage effect, which can control the centre-of-mass state of atoms with high fidelity.

Figure: Fidelity of the spatial adiabatic passage for two interacting bosons as a function of their interaction. From the non-interacting case (Eg = 1) to the Tonks-Girardeau limit (Eg = 2). Blue and orange curves represent total times T = 4000 and T = 12000, respectively.

We have investigated spatial adiabatic passage processes for ultra-cold atoms trapped in tunnel-coupled cylindrically symmetric concentric potentials. We studied the matter-wave analogue of the rapid adiabatic passage (RAP) technique for a high fidelity and robust loading of a single atom into a harmonic ring potential from a harmonic trap, and for its transport between two concentric rings. We also considered a system of three concentric rings and investigated the transport of a single atom from the innermost ring to the outermost one via the matter-wave analogue of the stimulated Raman adiabatic passage (STIRAP) technique. 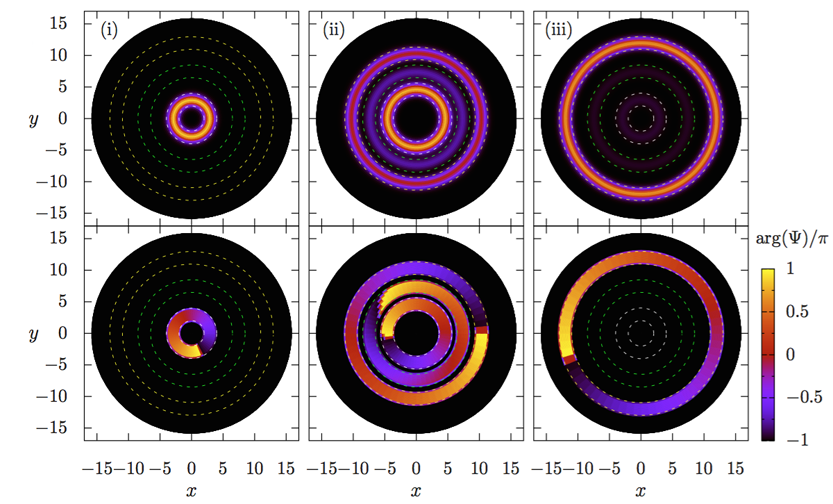 Figure: Numerical simulation of the matter-wave STIRAP process to transport a single atom from the innermost to the outermost potential of three concentric rings. Atomic density (top row) and phase distribution (bottom row) at (i) initial, (ii) intermediate, and (iii) final times of the process.

Adiabatic processes such as spatial adiabatic passage (SAP) can yield a very high fidelity, but at the cost of being carried out over long time scales. Shortcuts to adiabaticity (STA) techniques allow to speed them up adiabatic while maintaining their robustness and fidelity. We have applied STA to SAP to transfer a single electron in a system composed of three quantum dots in a robust manner, while decreasing the time required to achieve transport. In order to implement the STA a two-dimensional configuration for the quantum dots was needed, as well as the application of an external magnetic field.

Figure: (left) Sketch of the quantum-dot system where a STA is used to transport an electron between states 1 and 3. Green arrows represent an external magnetic field. (right) Fidelity of the transport with and without the application of the STA.

We have studied the stability of persistent currents in coherently coupled quasi-2D Bose-Einstein condensates confined in a ring trap at T=0. By numerically solving Gross-Pitaevskii equations and analyzing the excitation spectrum obtained from diagonalisation of the Bogoliubov-de Gennes matrix, we have described the mechanisms that brings about the decay of the persistent currents depending on the values of the interaction coupling constants and the Rabi frequency. When the unpolarized system decays due to an energetic instability in the density channel, the spectrum can develop a roton-like minimum, which gives rise to the finite wavelength excitation necessary for vortex nucleation at the inner surface. When decay in the unpolarized system is driven by spin-density excitations, the finite wavelength naturally arises from the existence of a gap in the excitation spectrum. In the polarized phase of the coherently coupled condensate, there is a hybridization of the excitation modes that leads to complex decay dynamics. In particular, close to the phase transition, a state of broken rotational symmetry was found to be stationary and stable. 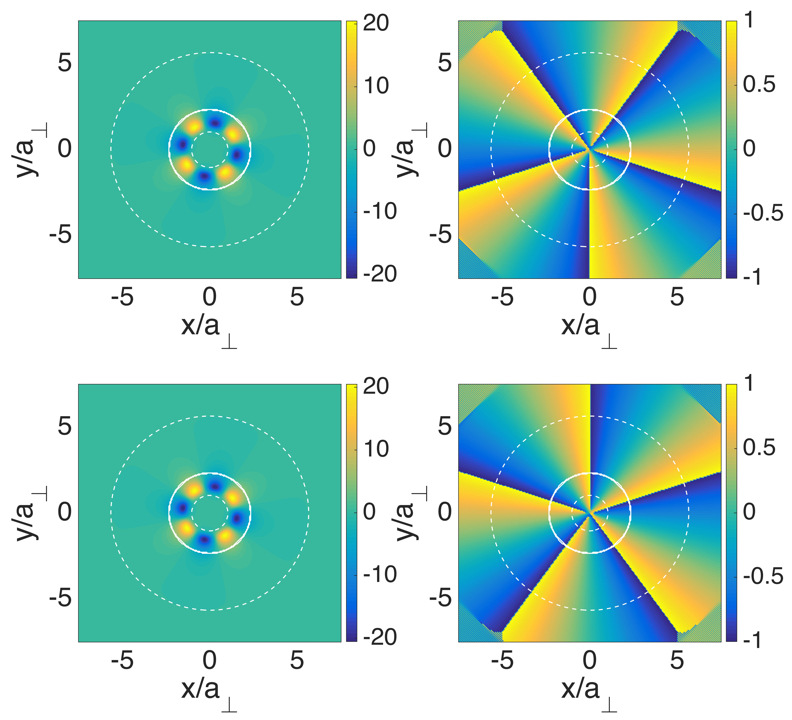 Figure: Density difference due to the instability between the initial and the evolved densitities for the two components (left) and associated phase patterns (right).

Vortex lattices in rapidly-rotating Bose--Einstein condensates lead to a periodic modulation of the superfluid density with a triangular symmetry. In this project we show that this symmetry can be combined with an external perturbation in order to create super-lattice structures with two or more periodicities.  Considering a condensate which is kicked by an optical lattice potential, we find the appearance of transient Moire lattice structures, which can be identified using the kinetic energy spectrum of the condensate. 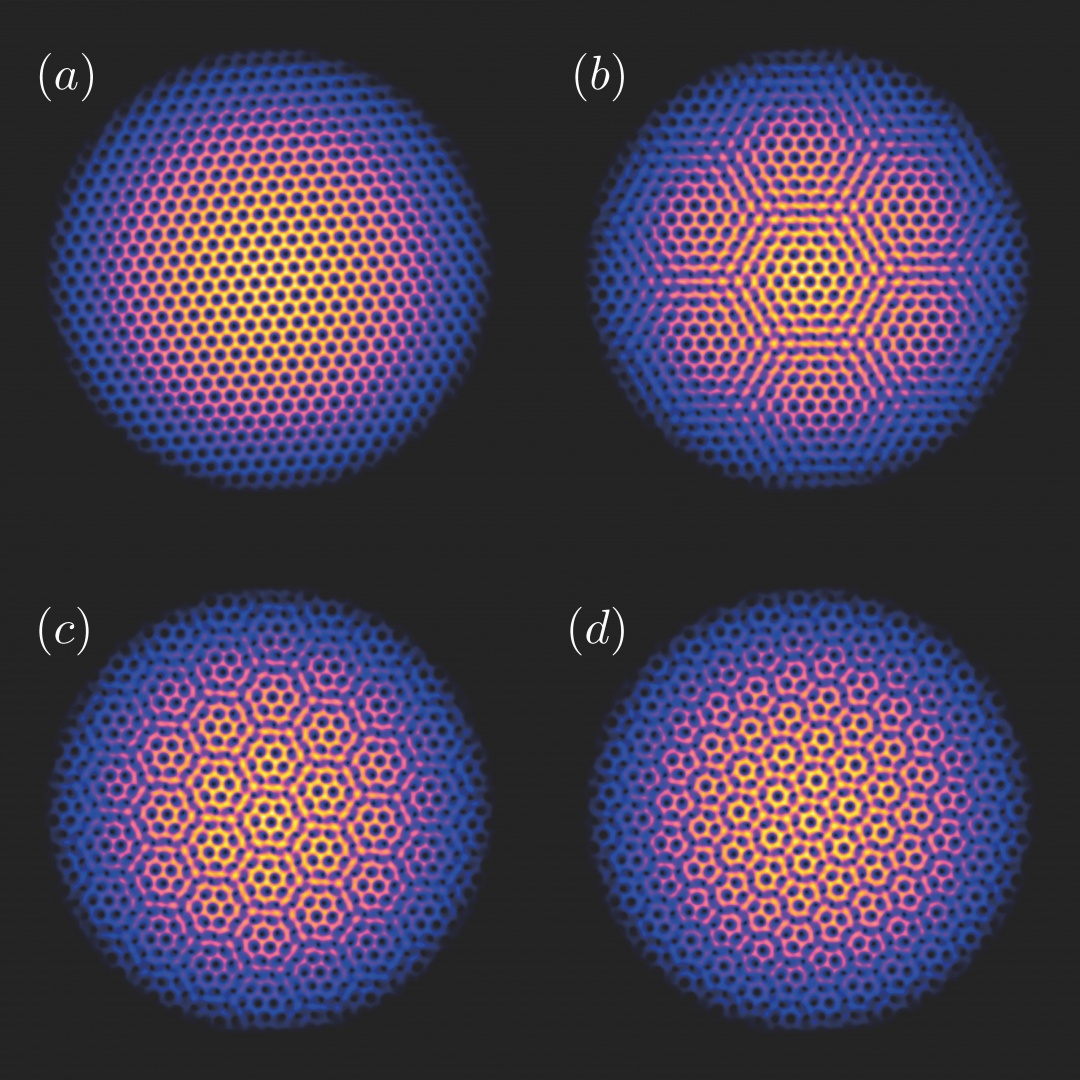 Figure: Clearly visible moire structures appear in the condensate density briefly after the kicking. The different structure sizes are due to different misalignment angles.

Trapping and optically interfacing laser-cooled atoms in evanescent fields around nanofibers paves a way to engineer hybrid quantum systems (light-matter interfaces), since they exhibit both long ground state coherence times and efficient coupling to fiber guided fields. This coupling is possible because the evanescent field around the nanofiber represents an intensity gradient to the nearby atoms, which leads to a dipole force that is either attractive or repulsive depending on the detuning. In this project we focus on a method of artificial gauge field generation, which involves adiabatic motion of atoms, that experience an evanescent field due to optical nanofibers. Because of a large gradient in generalized Rabi frequency, geometric vector and scalar potentials are created, which are related to Berry phase generation. We model the fiber-BEC coupled ensemble with artificial gauge fields by using the evanescent field of the propagating modes in the nanofiber. We perform numerical simulations of two-dimensional GPE using the artificial gauge fields calculated for the fundamental HE11 mode, to observe vortices in the trapped BEC on both sides of the nanofibers. 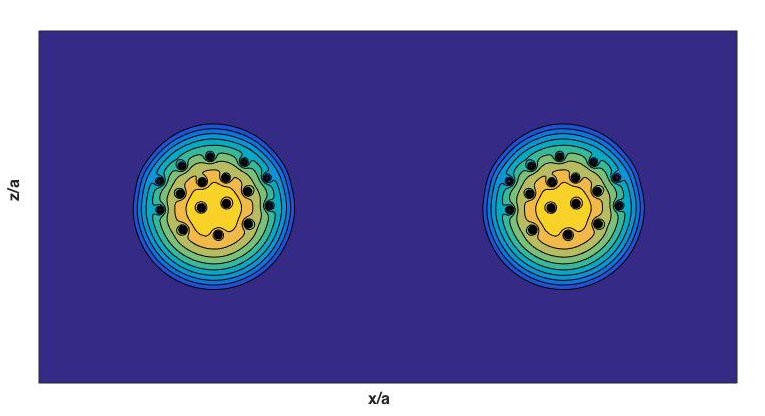 ​Figure: This figure shows a cut through the condensate density around the fibre (not shown). The cores of a number of vortex rings are clearly visible.

We have implemented the Chopped RAndom Basis (CRAB) optimal control technique for both single particle and multiple particles on a ring of strongly correlated ultracold atoms by either a rotating the trap, modifying the barrier strength, or both to achieve a NOON superposition state. For this, we determined either the optimal angular velocity of the trap or the optimal barrier strength as a function of time, where the angular velocity is constrained to start at 0 and finish at pi, the position of the first avoided crossing in the energy spectrum. At that point, our implementation of the CRAB algorithm maximizes the fidelity and we have shown that the highest fidelity was generated by optimizing both our rotational pulse and barrier strength, while the minimum fidelity was generated by optimizing over the barrier strength alone. Thus, it should be now possible to generate a rotating pulse in a certain time regime to create a NOON state on a ring buy either optimizing the rotation of the trap or barrier strength.

​Figure: The left shows the energy spectrum of a single particle on a ring with broken rotational symmetry and the panel on the right shows an example of a rotational pulse generated by the CRAB algorithm for creating a superposition state.

3.9  Measurement of collective excitations in a spin-orbit-coupled Bose-Einstein condensate

The collective excitation spectrum of a spin-orbit-coupled Bose-Einstein condensate features the existence of roton-like structure, which can be measured using Bragg spectroscopy. The spin-orbit coupling is generated by Raman dressing of atomic hyperfine states. When the Raman detuning is reduced, mode softening at a finite momentum is revealed, which provides insight into a supersolid-like phase transition. Together with the experimental group of Prof. Engles at WSU we have found that for certain experimental parameters realised in their experiment, this softening stops at a finite excitation gap and is symmetric under a sign change of the Raman detuning.

Figure: The left shows the roton softening for different Raman detunings and the right panel the schematic explaining the Bragg spectroscopy technique.

Together with the group of Prof. Muga we have worked out the theory and applications of a fast quasiadiabatic approach to speed up slow adiabatic manipulations of quantum systems by driving a control parameter as near to the adiabatic limit as possible over the entire protocol duration. We find characteristic time scales, such as the minimal time to achieve fidelity 1, and the optimality of the approach within the iterative superadiabatic sequence. Specifically, we show that the population inversion in a two-level system, the splitting and cotunneling of two-interacting bosons, and the stirring of a Tonks-Girardeau gas on a ring to achieve mesoscopic superpositions of many-body rotating and nonrotating states can be significantly speeded up. 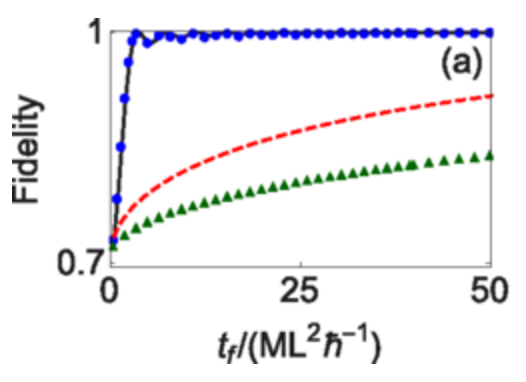 Figure: Fidelity of the NOON state for atoms on a ring using the fast quasiadiabatic method (black line) and a linear pulse (red line) for three particles. For 9 particles the same is given by the blue dots and the green triangles, respectively.