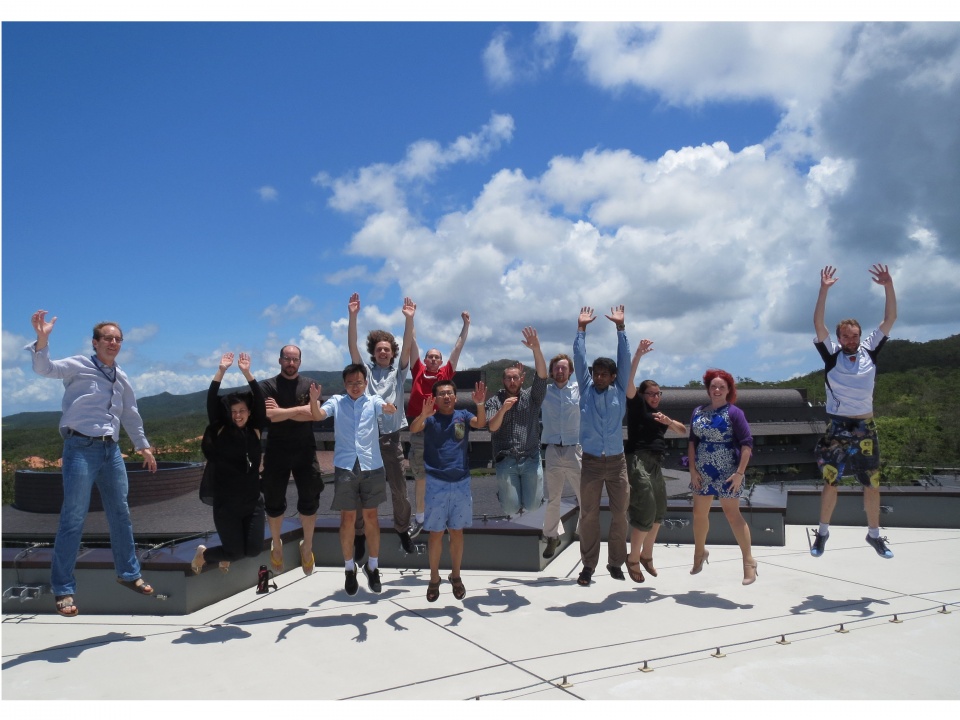 After finally relocating to Okinawa, the group has set up again and is finding its feet in the in the new and beautiful environment. Our focus currently remains the work on cold atomic gases and quantum information, but we are making first strides into areas related to biophysics and establishing local collaborations.

Even though they have been experimentally available for almost 20 years now, cold atomic gases are still finding applications as clean and highly controllable test systems in many areas of physics. Most prominent among these are quantum mechanics and solid-state physics and we are working on describing a number of systems and techniques to identify new applications and physics. These include strongly correlated systems, quantum walks, spin-chains, new-trapping geometries, superfluid systems, double wells and others.

As an example where an external environment can control a specified system. we have studied the dynamics of a two-level quantum system interacting with an external XY spin chain in the presence of an external magnetic field.  While the bath itself can enhance the transition probability from the lower level to the upper level of the system, we show that this noise-assisted phenomenon is also sensitive to a change of the quantum phase of the environment. The derivative of the transition probability displays a maximum in correspondence with the critical value of the applied field in the case of both isotropic and anisotropic chains. 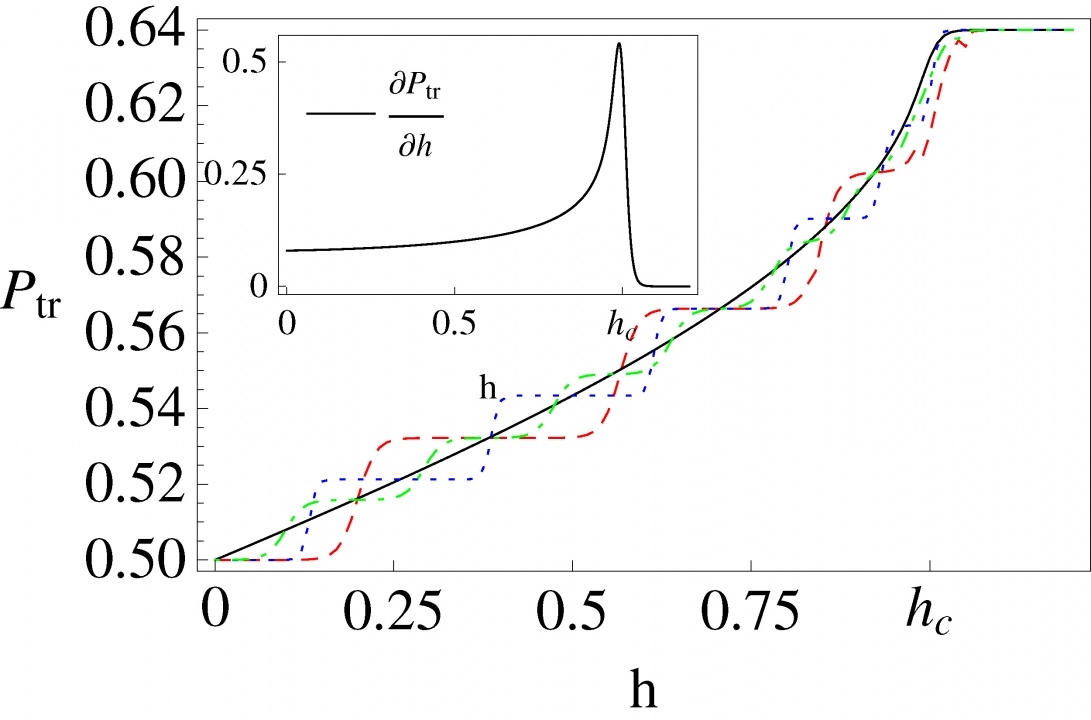 The figure shows the transition probability as a function of external field strength for a increasing number of sites. The mean field limit is represented by the smooth black curve and the inset shows the maximum of the derivative appearing at the critical value.

3.2 Creating atom-number states around tapered optical fibers
By introducing a tapered optical nanoﬁber into a Mott insulator state of ultracold atoms in an optical lattice potential, a mesoscopic atomic sample with a very well defined particle number can be created. This is possible due to the fact that the disturbance of the lattice geometry due to scattering effects on the fibre is small and we have calculated the best strategy for minimizing this effect. By transmitting off-resonant light through the ﬁber one can then melt the lattice potential locally, so that only a well-defined number of atoms from the Mott state transfer into the lattice potential. 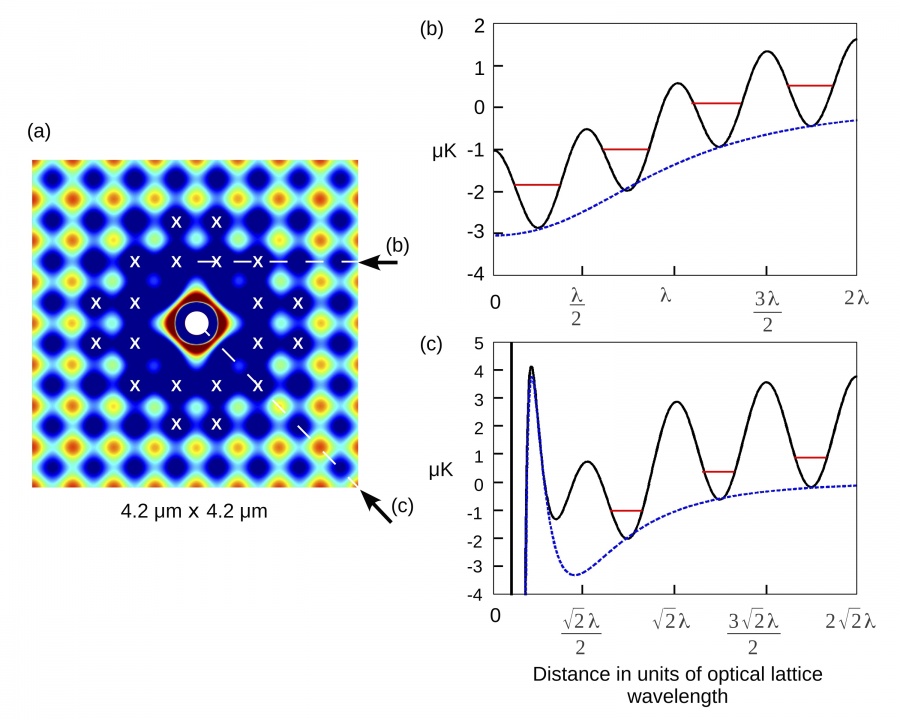 The figure shows an example in which the original lattice positions are identified, which are effected by the optical potential around the fibre such that the atoms are trapped in the fibre-trap after the lattice is switched off. For this set of parameters a sample of 20 atoms is created.

Noise effects resulting in state ﬂipping and depolarization are known to be able to enhance transport in quantum walk systems, due to their destructive influence on the coherences build up during the walk. In this work we have compared the quantum correlations between the two spatial (x-y) degrees of freedom using measurement-induced disturbance for several two-dimensional discrete-time quantum walks and found that the schemes using two-state coins are more robust against decoherence than the Grover walk, which uses a four-state coin. 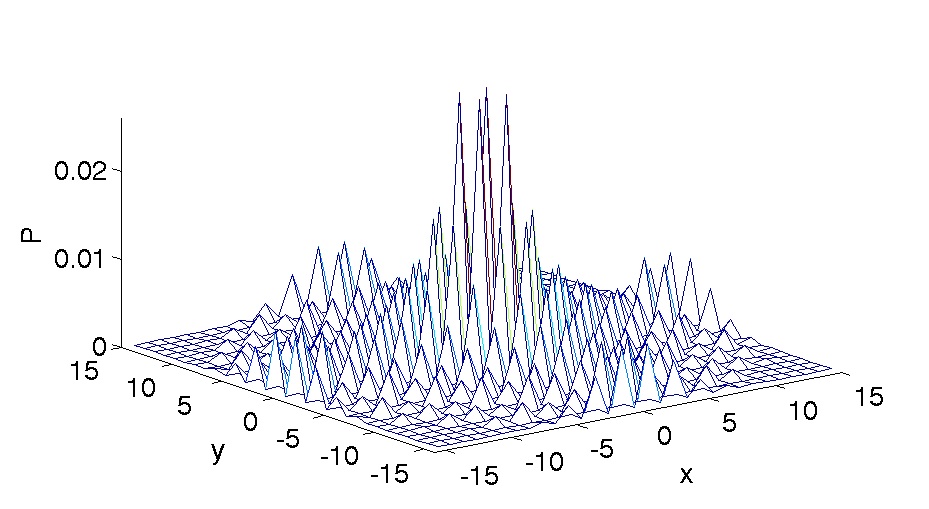 The figure shows the probability distribution of the Grover walk when subjected to a different state-ﬂip noise level p = 0.1 (left hand side) and p = 0.9 (right hand side).

3.4. Effect of interparticle interaction in a free oscillation atomic interferometer

In this project we investigate the quantum states resulting from two interacting bosons repeatedly scattering off a beam-splitter in a free oscillation atom interferometer.  In this process the interparticle scattering length and the beam-splitter probabilites can be used as control parameters, leading to the possible creation of a wide range of interesting states for quantum metrology, including the NOON state.

As a model for entangling two particles through an environment we theoretically investigate how two impurity defects embedded in and interacting via a crystalline structure develop correlations as a function of time. For sufficiently cold chains and for a certain class of initial, separable states of the defects we show that entanglement can be created, which results from the interplay between localized modes , is independent of the chain size, and decays slowly with the distance between the impurities.

Two-component ultracold bosonic gases, where one of the species is in the weakly interacting regime and the other is either weakly or strongly interacting, are of large interest in the area of quantum engineering. We are developing a description for the one-dimensional limit, in which a strongly correlated component (a Tonks-Girardeau gas) is immersed in a Bose-Einstein condensate, which is an example of a new class of quantum system involving a tunable, superfluid environment.

In order to represent physical states the density operator for systems of identical particles must satisfy the symmetrisation principle (SP) and conform to super-selection rules (SSR) that prohibit states that have coherences between differing total particle numbers. Here we consider the entanglement between two systems of modes, whose occupancies are given by the particle numbers, through spin squeezing inequalities and find that the presence of super-selection rules requires existing inequalities to be modified. The work applies to systems with conserved particle number.