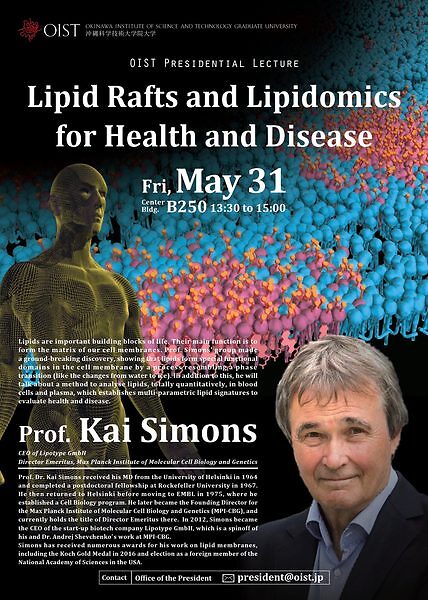 Lipids are important building blocks of life. Their main function is to form the matrix of our cell membranes. Prof. Simons’ group made a ground-breaking discovery, showing that lipids form special functional domains in the cell membrane by a process resembling a phase transition (like the changes from water to ice). In addition to this, he will talk about a method to analyse lipids, totally quantitatively, in blood cells and plasma, which establishes multi-parametric lipid signatures to evaluate health and disease.

Prof. Dr. Kai Simons received his MD from the University of Helsinki in 1964 and completed a postdoctoral fellowship at Rockefeller University in 1967. He then returned to Helsinki before moving to EMBL in 1975, where he established a Cell Biology program. He later became the Founding Director for the Max Planck Institute of Molecular Cell Biology and Genetics (MPI-CBG), and currently holds the title of Director Emeritus there.  In 2012, Simons became the CEO of the start-up biotech company Lipotype GmbH, which is a spinoff of his and Dr. Andrej Shevchenko’s work at MPI-CBG.
Simons has received numerous awards for his work on lipid membranes, including the Koch Gold Medal in 2016 and election as a foreign member of the National Academy of Sciences in the USA.