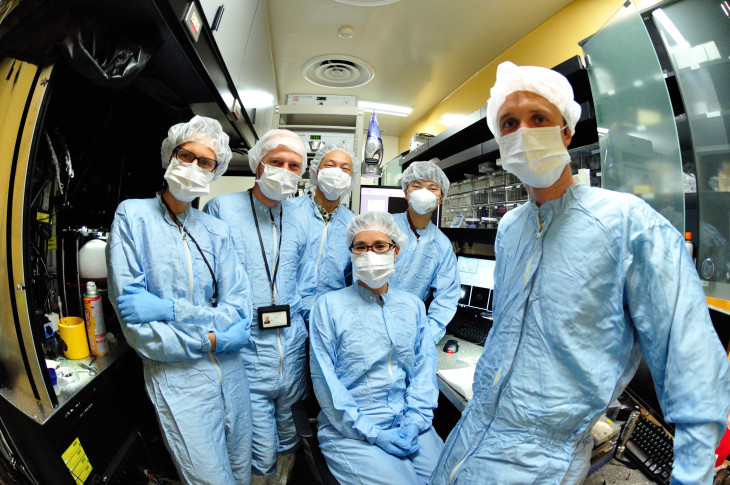 3.1 In vivo imaging in barrel cortex of mouse

In the FY2013 we continued optimized surgical procedures and in vivo imaging techniques. One of the optimizations resulted in a patent. We focus on barrel cortex and visual cortex.

A mouse was head restrained and maneuvered a spherical treadmill. 12 speakers around the treadmill provided a virtual sound environment. The direction and the amplitude of sound pulses emulated the location of sound source, which was moved according to the mouse’s locomotion on the treadmill. When the mouse reached the sound source and licked a spout, it got a water reward. In some trials, the sound was intermittently omitted: the mouse asked to utilize a mental simulation to reach the sound source.

Calcium is an important second messenger in neurons and an increased calcium concentration is correlated with neuronal activity. For this reason we use a genetically encoded calcium indicator, called G-CaMP, in posterior parietal cortex (PPC) of mice to detect neuronal activities. We could record the activities (i) of more than 500 neurons simultaneously and (ii) of cortical layer 1 to 5 for one hour continuously (Figure 1, 2). From the population activities in layer 2, we decoded the distance to sound source by the least absolute shrinkage and selection operator (LASSO). LASSO extracted the relevant neurons for distance coding; the neurons were homogeneously distributed in the PPC. Also, the decoder could successfully decode the sound-source distance during no-sound periods. These results suggest that PPC neurons represent and update the distance of sound source not only from present auditory inputs but also by dynamic update of the estimate using an action-dependent state transition model. 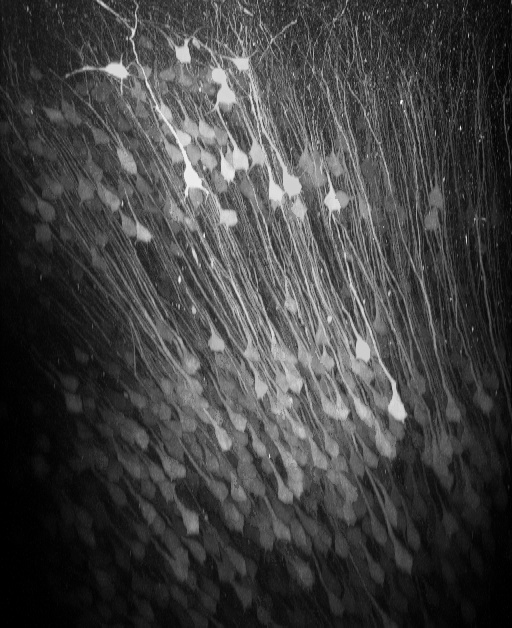 Figure 2: (A) In-vivo imaging of neurons with two-photon microscopy. The image shows the xz plane reconstruction of calcium-sensor-expressing cortical neurons in posterior parietal cortex . The dotted line indicates the imaging plane in (B). Neurons coding sound-source distance were extracted by LASSO. 282 neurons colored red or blue were found among 540 neurons (B). The color depth shows the weights in LASSO. (C) Distance estimation extracted from neuronal activity with LASSO. Horizontal and vertical axes show the actual and estimated distance to sound source, respectively. The estimations were successful even during the no-sound periods in the intermittent condition.

We were studying the visual pathway – the pathway which sends signals from the eye to the cerebral cortex, where the visual information is processed. Between the ganglion cells of the eye and the cortex there is one more station which the information has to pass: The visual thalamus. The thalamus is thought of being a relay which can gate the visual information or block it. For example, when we are awake we see our environment but if we are sleeping this visual input to our brain is turned off. We try to understand how this switching could occur.

The relay neurons in the thalamus are called thalamocortical (TC) neurons because they send the signal which they get from the retina from thalamus to cortex. Interestingly, the dendrites of TC neurons get a second input coming from the cortical layer 6.

To understand what this input from cortex is good for, we did experiments with brain slices and emulated the cortical input to the TC neurons by local glutamate application (Figure 3). We found that the glutamate application causes a dendritic activation, so called NMDA spike/plateau potentials (Figure 3, 4). Interestingly, this activation in the dendrite switches the mode of the neuron and now allows the information to pass (Figure 5,6). Without the dendritic activation the pathway is blocked. We were also able to find out how this “change of mode” works: T-type calcium channels cannot recover from inactivation when dendrites are activated. Without T-type calcium channels the neurons will not burst but reliably gate signals from retina. 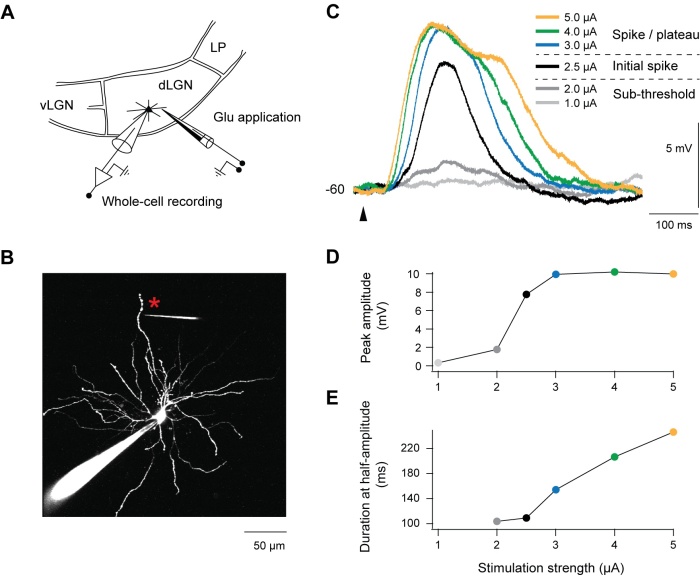 Figure 4: The spike/plateau potentials are mediated by NMDA receptors as can be shown by pharmacology (CPP application) and two-photon imaging. A TC neuron (A) is stimulated by glutamate application to the dendrite (location indicated by asterix). Simultaneous electrical (B) and optical recording (two-photon calcium recordings, C) show dendritic spike/plateau potentials which are almost completely blocked by CPP, a NMDA receptor antagonist. Also strong glutamate application is not able to recover the potential (D). 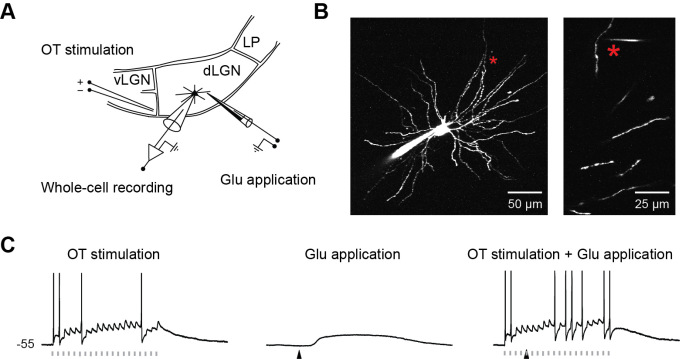 We study magnetic FePt nanoparticles (Figure 7) with a hydrophilic, inert, and biocompatible silico-tungsten oxide shell. The particles can be functionalized, optically detected, and optically manipulated. To show the functionalization the fluorescent dye NOPS was bound to the FePt core-shell nanoparticles with propyl-triethoxy-silane linkers and the labeled particles were observed in ethanol (EtOH). In aqueous dispersion the NOPS fluorescence is quenched making them invisible using 1-photon excitation. However, we observe bright luminescence of labeled and even unlabeled magnetic core-shell nanoparticles with multi-photon excitation. Luminescence can be detected in the near ultraviolet and the full visible spectral range by near infrared multi-photon excitation (Figure 8). For optical manipulation, we were able to drag clusters of particles, and maybe also single particles, by a focused laser beam that acts as optical tweezers by inducing an electric dipole in the insulated metal nanoparticles. In a first application, we show that the luminescence of the core-shell nanoparticles is bright enough for in vivo multi-photon imaging in the mouse neocortex down to cortical layer 5 (Figure 9, 10). 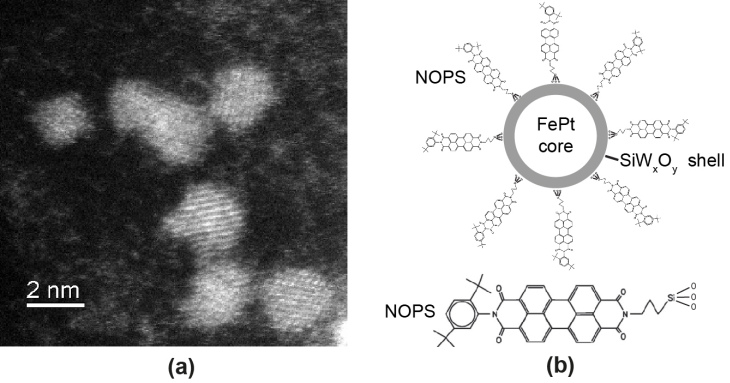 Figure 7: HR-TEM image of magnetic FePt core-shell nanoparticles, however, the shell is not visible without averaging (a). Tungsten oxide covering the surface of the crystalline nanoparticles causes dispersibility in polar solvents like EtOH and water but also allows functionalization as, for example, labeling with the fluorescence dye NOPS as illustrated schematically in (b). 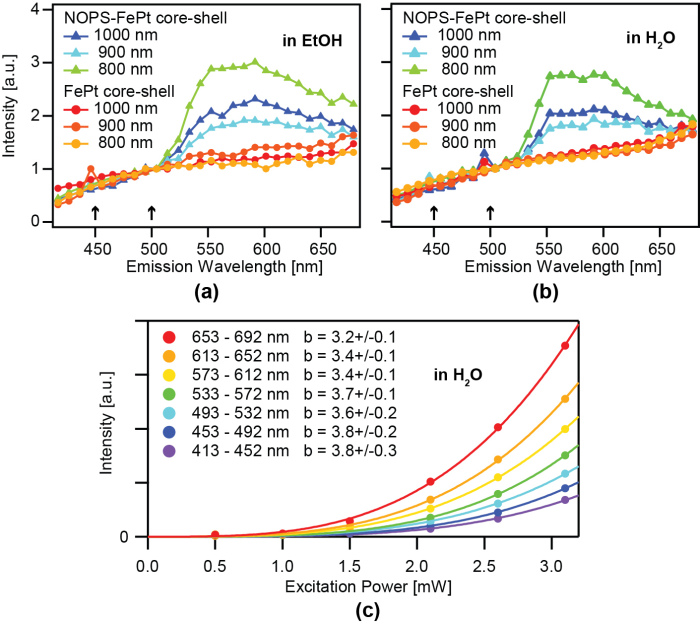 Figure 8: Average multi-photon-excited fluorescence/luminescence spectra of NOPS-labeled and unlabeled magnetic FePt core-shell particles immobilized on glass slides in EtOH (a) and H2O (b) excited with 1.5 mW at 800 nm, 900 nm, 1000 nm. Spectra were normalized to the intensity at 507 nm. The difference of the two spectra resembles the emission spectrum of NOPS but shows significant differences compared to the 1-photon emission spectrum in EtOH (Fig. 2). In some spectra the backscattered or reflected second harmonic signal is visible (arrows). The intensity of unlabeled magnetic FePt core-shell nanoparticles, immobilized on a glass slide with water added and excited at 1000 nm, increases wavelength-dependent by the power of 3.8 to 3.2 up to an excitation power of 3.2 mW (c). Background-corrected data was fitted by y(x) = axb. Values of b are listed ±standard deviation. 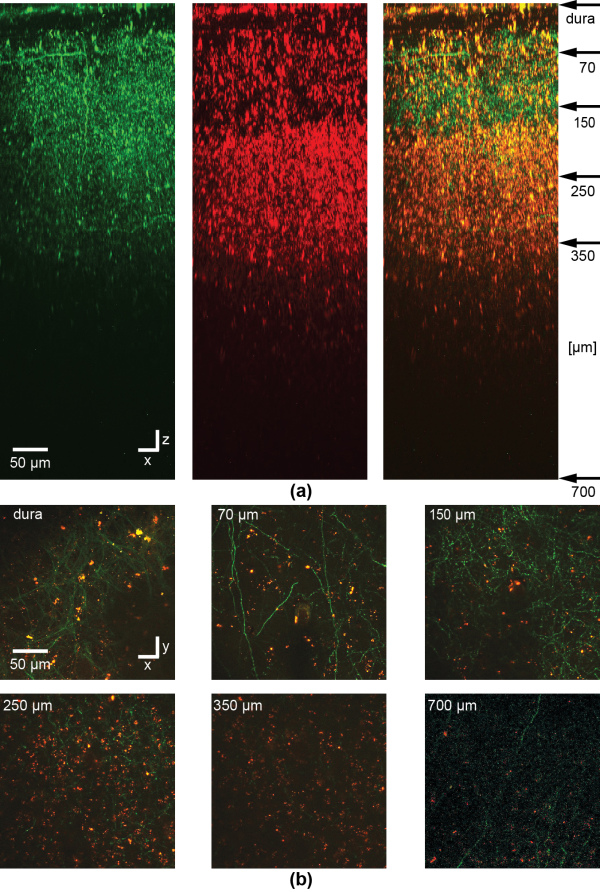 Figure 9: In vivo imaging of NOPS-labeled magnetic nanoparticles or clusters of particles in the barrel cortex of an anesthetized mouse. To label a subset of neurons in barrel cortex, at first, a viral vector is injected delivering the DNA of the fluorescent protein eGFP. 4 days later, magnetic FePt nanoparticles were injected and imaged through a chronic cranial window with multi-photon microscopy in the mouse barrel cortex. A stack of images was recorded with two channels starting from the dura and then reconstructed to show the side view (a). Clusters of NOPS-labeled magnetic FePt core-shell nanoparticles and maybe also single particles are visible in the green (left) and red (middle) channel while the axons and dendrites of eGFP expressing neurons are only visible in the green, as can be seen in the overlay (right). Particles or clusters of particles can be detected in xy images between axons (majority of processes) and dendrites down to a depth of 700 µm (b). Depth of imaging is indicated in the upper left corner corresponding to the arrows in (a). For the image at 700 µm in (b) the contrast and averaging was increased in comparison to the images at lower depth. The dura is visible due to backscattering of the second harmonic signal of collagen. The excitation wavelength was 1000 nm. 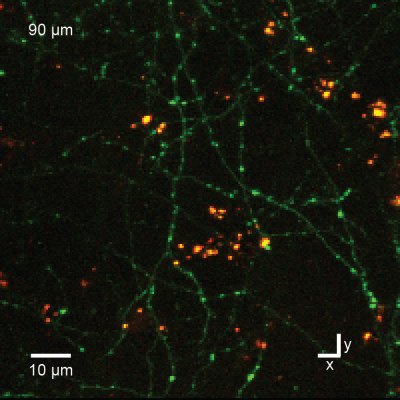 Figure 10: In vivo imaging as in Fig.7 but at higher magnification shows nanoparticles (yellow) and axons of cortical pyramidal neurons (green) in cortical layer 1, 90 µm below the brain surface. The bright green spots along the axons are synaptic boutons.

We image the larvae of transgenic ascidians with two-photon microscopy. This allows us to get higher resolution than with confocal microscopy due to lower scattering artefacts. We studied morphology in fixed larvae (Figure 11) and functional signals in vivo. 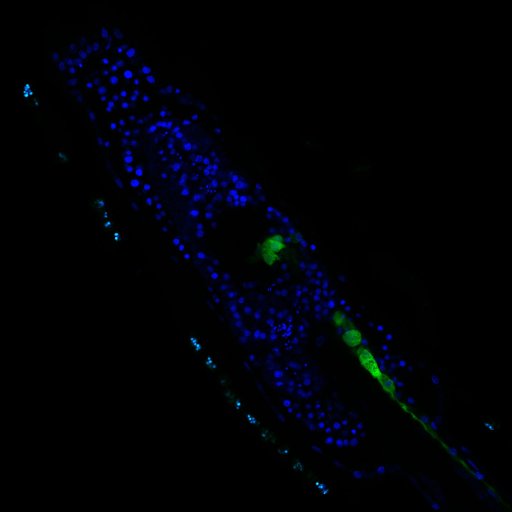 We are exploring the possibilities of retrograde labeling of neurons for functional imaging. We are testing different designs of viral vector systems.

There is growing interest in understanding calcium dynamics in dendrites, both experimentally and computationally. Many processes influence these dynamics, but in dendrites there is a strong contribution of morphology because the peak calcium levels are strongly determined by the surface to volume ratio of each branch, which is inversely related to branch diameter. In this project we explore the predicted variance of dendritic calcium concentrations due to local changes in dendrite diameter and how this is affected by the modeling approach used. We investigate this in a model of dendritic calcium spiking in different reconstructions of cerebellar Purkinje cells (Figure 12) and in morphological analysis of neocortical and hippocampal pyramidal neurons. 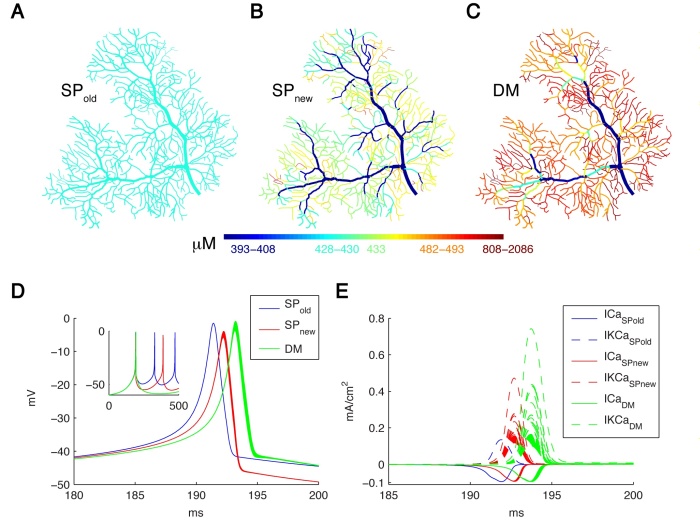 Figure 12: Spatial Ca2+ gradients strongly depend on the type of model implementation. Panels A-C show maps of the integrated calcium levels in the dendrite during a spontaneous burst of Ca2+ spikes (panel D). The dendritic branches are color coded to show the integrated calcium levels using a 20 ms window around the peak Ca2+ concentration of the first dendritic Ca2+ spike. The color scales used in these maps are nonlinear (using histogram equalization) to enhance the contrast. (A) Single Ca2+ pool model using SPold mechanism results in homogenous Ca2+ levels. (B) Single Ca2+ pool model using SPnew mechanism results in variable Ca2+ levels. (C) Detailed Ca2+ dynamics model with buffering and 1D diffusion results in variable Ca2+ levels with larger Ca2+ gradients. (D) Voltage traces show the first spike of the Ca2+ burst for each model in all dendritic compartments for the 3 different models (see color code in Figure). The inset shows complete traces. (E) The underlying Ca2+ and KCa currents (recorded from all dendritic compartments) for the Ca2+ spike of the 3 different models (see color code in Figure). 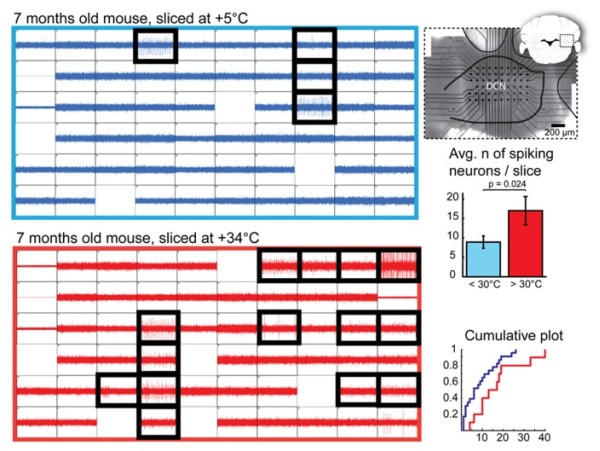 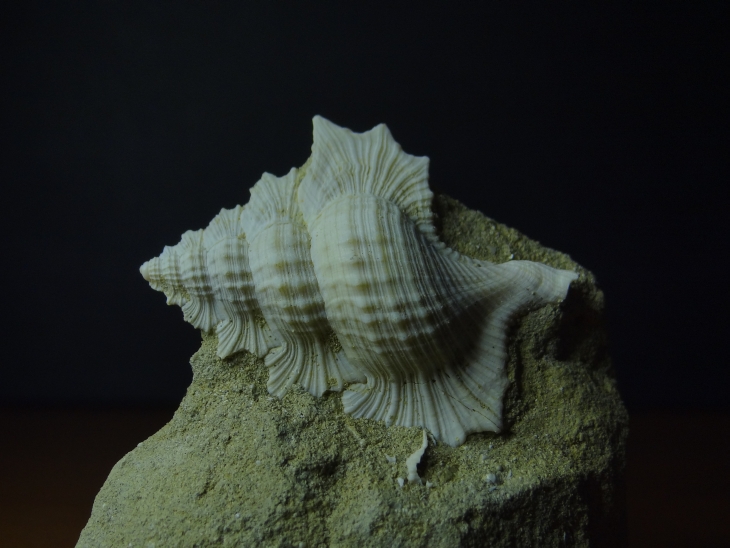