Presidential Lecture - "Astronomy on the Cusp: A Subject Driven by Progress in Technology" by Prof. Shrinivas. R. Kulkarni 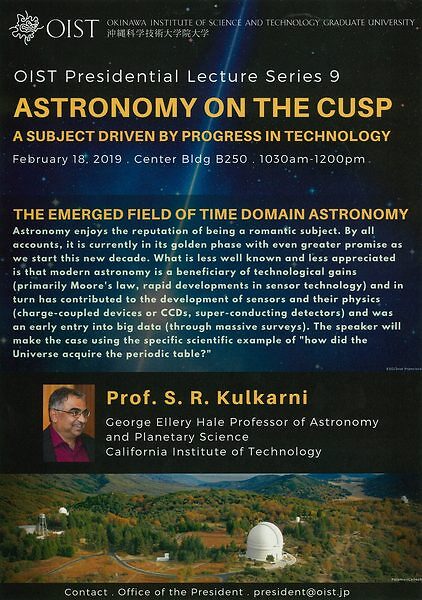 Astronomy enjoys the reputation of being a romantic subject. By all accounts, it is currently in its golden phase with even greater promise as we start this new decade.  What is less well known and less appreciated is that modern astronomy is a beneficiary of technological gains (primarily Moore's law, rapid developments in sensor technology) and in turn has contributed to the development of sensors and their physics (charge-coupled devices or CCDs, super-conducting detectors) and was an early entry into big data (through massive surveys). The speaker will make the case using the specific scientific example of "how did the Universe acquire the periodic table?"

Over the past nearly two decades, along with his current students, post-doctoral fellows, former students, post-doctoral scholars and long term collaborators , he has worked on millisecond pulsars, old neutron stars, young neutron stars, brown dwarfs, soft gamma-ray repeaters, supernova remnants, gamma-ray bursts, new types of optical transients and instrumentation. His current focus is the public-private Zwicky Transient Facility (ZTF) aimed at an exploration of the transient sky (brighter than 21 mag). In development: STARE, a search for Galactic versions of Fast Radio Bursts (at OVRO, Palomar and other locations) and Kitt Peak EMCCD Demonstrator.