3.1 Dynamics of a self-propelled camphor boat at the air-water interface.

Studies on the self-motion of camphor at air-water interfaces have a distinguished history in the annals of science. Between first observations reported in 1686 to eventually explaining camphor self-motion as resulting from surface tension gradients in 1869, the problem attracted the attention of some of the finest scientific minds including Alessandro Volta, Giovanni Battista Venturi, Jean-Baptiste Biot and Lord Rayeligh amongst others. Despite its rich history, the camphor boat system continues to remain relevant into modern times, be it in statistical mechanics within the context of active matter, hydrodynamic context of viscous marangoni propulsion, biological context of chemomechanical transduction, autonomous motion and self-assembly, and reconfigurable actuators in soft matter physics among many others.

In this work, we conducted an experimental study of the self-motion of agarose gel tablets loaded with camphoric acid (CA) at the air-water interface, henceforth referred to as c-boats. We identified three distinct modes of motion, namely a harmonic mode where the c-boat speed undergoes temporal sinusoidal oscillations, a steady mode of constant c-boat motion, and a relaxation oscillation mode where the c-boat remains at rest between sudden jumps in speed and position at regular time intervals. Whereas all three modes have been separately reported in the published record in a variety of systems, we show these seemingly different self-propulsive modes arise from a common description. Through metered dosage of Sodium Dodecyl Sulfate (SDS) to control the air-water surface tension, we experimentally trace the origin of self-propulsive mode selection to CA-water surface tension difference. Furthermore, our experimental observations are complemented by a simple mathematical model based on minimal physical requirements imposed by the c-boat system. This minimal parameter model consisting of a pair of coupled ordinary differential equations exhibits all three self-propulsive modes as its solutions which represent nonlinear self and relaxation oscillations, thereby connecting this c-boat system with dynamical systems theory. 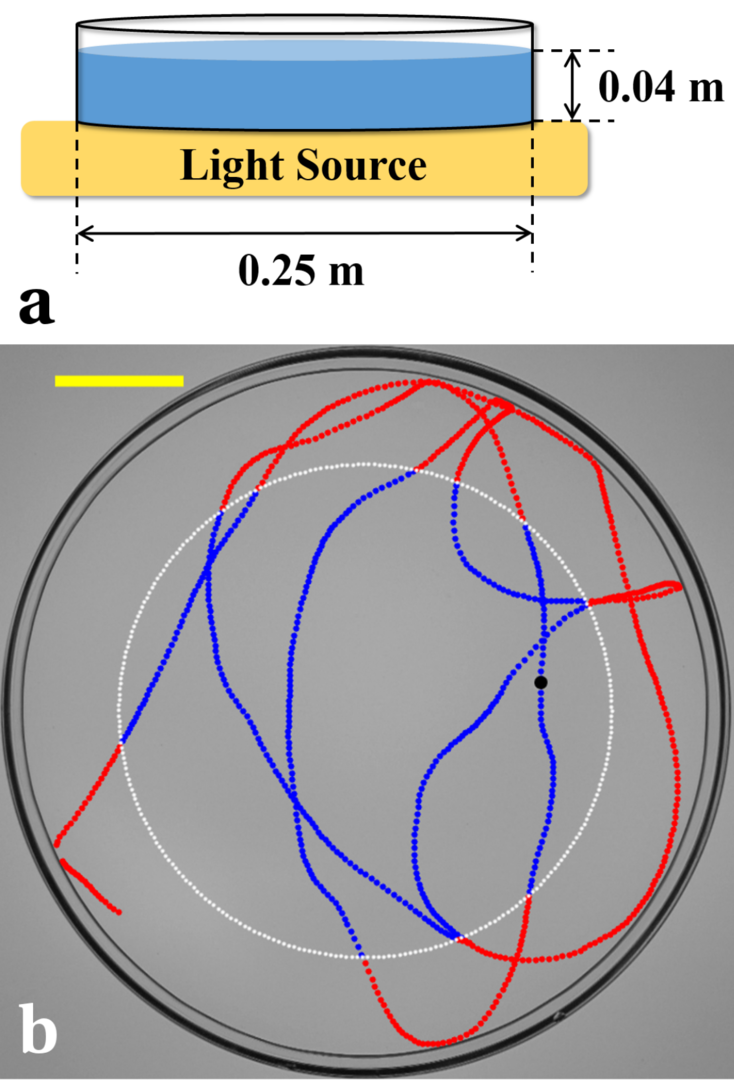 Figure 1: a) Schematic of the experimental setup. b) Trajectory for a single camphoric acid boat. The region within the white dotted line denoting the trajectory in blue is considered for all analysis. The trajectory marked in red is discarded from analysis to avoid systematic errors arising from boundary effects.

Figure 1a shows a schematic of the experimental setup. All experiments were performed in a glass petri dish (0.25 m in diameter) filled with de-ionized water to a height of 0.04 m. A camphoric acid tablet (c-boat) was gently introduced at the air-water interface and its self-motion was recorded with a Nikon D800E camera at 30 frames per second. The petri dish was placed atop a uniform backlit LED illumination source intentionally chosen to operate with direct current to circumvent alternating current flicker in images interfering with post-processing.  The c-boat appears as a dark disk moving in a bright background in this imaging method as shown in figure 1b. The experimental images were post processed with image analysis algorithms written in-house to obtain the c-boat position and velocity as a function of time. The c-boat position and velocity information employed in the analysis was confined to a region 0.036 m away from the walls to exclude boundary effects. Parts of the c-boat trajectory (red in figure 1b) lying outside the dashed white circle in figure 1b at a distance of 0.036 m from petri dish wall were not employed in our analysis in order to exclude boundary effects. This 0.036 m exclusion distance was empirically determined from the longest radial distance over which marangoni spreading of camphoric acid was prominent. Only blue sections of the c-boat trajectory within the inner circle bounded by white dashed line in figure 1b were used in all the analysis.

The shape and size of a chemical-laden tablet, e.g. a camphoric acid tablet, changes over the duration of the experiment as the substance undergoes dissolution or sublimation into the surrounding fluids. To decouple the shape from the chemical composition, the c-boats were constructed by infusing camphoric acid in agarose gel.

The c-boat motion being governed by Marangoni force, surface tension difference between the ambient surface and CA entering the surface forms the primary parameter for this study. Since the c-boat holds a finite quantity of CA, its concentration monotonically decreases with time, thereby continually reducing the strength of the marangoni effect. Independent experiments modifying the ambient surface tension confirmed the role of surface tension difference as the primary parameter. We varied the surface tension of the ambient interface by introducing metered dosage of Sodium Dodecyl Sulfate (SDS) (Wako Pure Chemical Industries, Ltd., Cat. No. 196-08675) from known published tables. Actual surface tension values were also independently confirmed with the pendant drop method on a tensiometer (OneAttension Theta tensiometer). 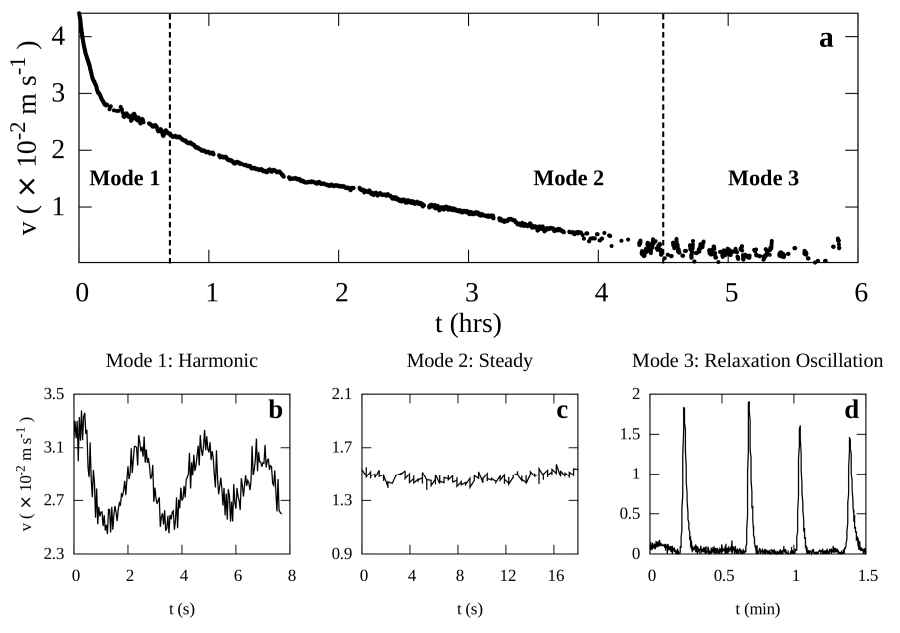 Figure 2: a) Average speed exhibits a monotonic decay with time as the total quantity of camphoric acid within the tablet decreases, thus leading to a reduction in the Marangoni stress. With decreasing average speed, three distinct modes of motion are observed: b) Harmonic mode with sinusoidal oscillations, c) Steady State Mode where the speed is constant modulo fluctuations and d) Relaxation oscillation mode where the camphoric acid boat is static for long durations before jumping to a new location at regular intervals.

A moving c-boat leaves camphoric acid in it's wake which can be qualitatively visualised via the distribution pattern of tracer particles decorating the surface figure 3. Hollow silica glass spheres (specific gravity 0.25 and 50 micron diameter) sprinkled onto the air-water interface were used to follow the well defined comet-shaped particle-free region in the wake of a c-boat. The shape of this region provides a qualitative measure of the strength of marangoni force acting on the c-boat.

When a c-boat is placed at the air-water interface, CA spreads radially and sets up axisymmetric interfacial tension gradients around the c-boat. Ambient fluctuations spontaneously break this symmetry and sharpen the gradients along a preferential direction; as a consequence a net force acts on the c-boat and propels it. The boat's motion amplifies the asymmetry and maintains it, thereby permitting it's continued motion. Owing to constant CA dissolution from the interface into the bulk fluid, the c-boat motion continues until it exhausts all CA molecules. With decreasing marangoni force strength in time, the c-boat exhibits three distinct modes of motion.  Figure 2b-d show time traces of instantaneous c-boat speed at specific intervals corresponding to these three modes. At early times and high surface tension difference, the c-boat speed exhibits harmonic oscillations about the mean (see figure 2b). This mean speed and oscillation frequency continuously decrease with time, whereas the oscillation amplitude passes through a maximum before it decreases and transitions to the second distinct mode where the c-boat moves with steady speed (see figure 2c). The third distinct mode of relaxation oscillations emerges at long times and low surface tension differences where c-boat motion occurs in periodic bursts interspersed with durations of almost no c-boat motion (see figure 2d). 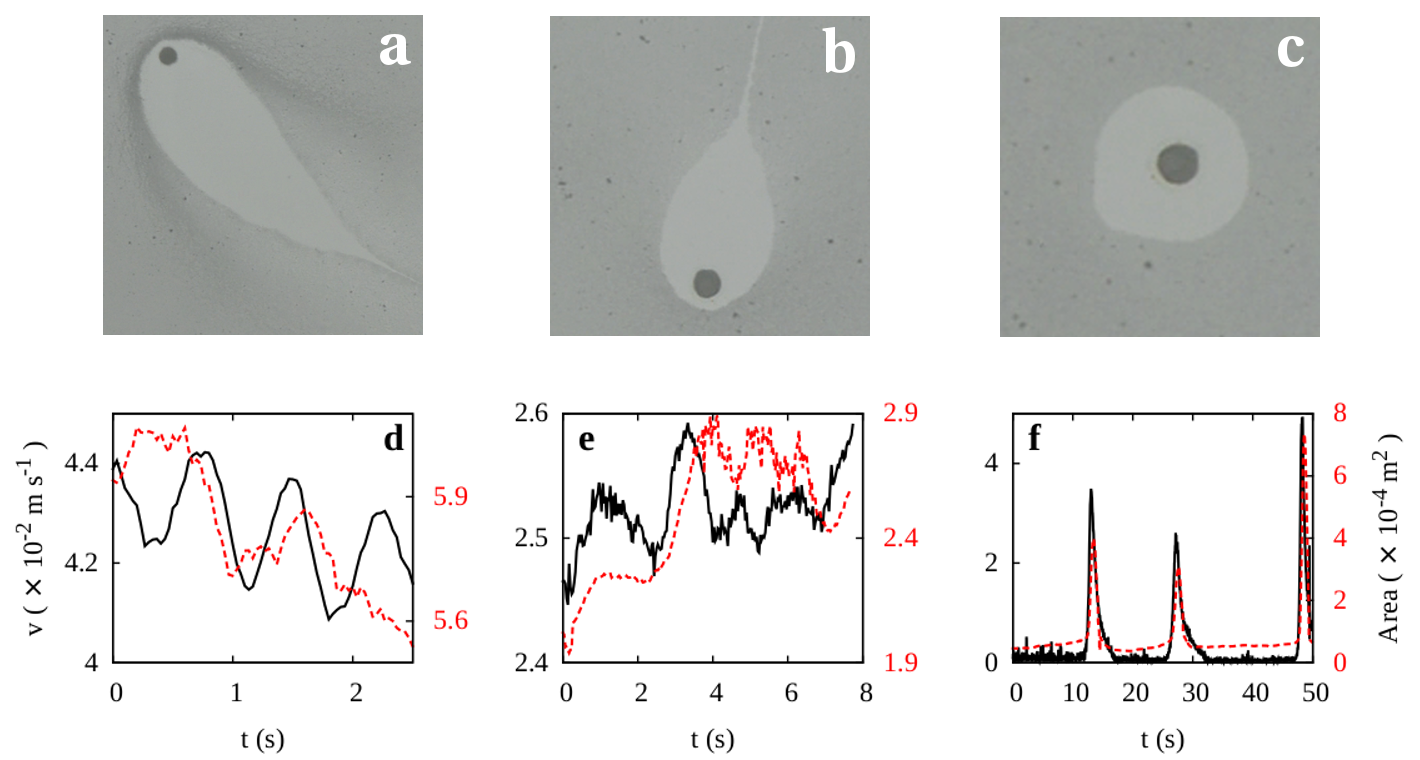 Figure 3: Visualization of the camphoric acid spreading over the surface around a moving camphoric acid boat with tracer particles for (a) Harmonic mode, (b) Steady state mode, and (c) Relaxation oscillation mode. The brighter, tracer-free region has an area that exhibits same behavior as the speed as observed for (d) Harmonic mode, (e) Steady state mode and (f) Relaxation oscillation mode provides experimental evidence in support of the assertion that the modes of motion are a result of Marangoni stress.

"Memory" in materials physics is usually associated with the existence of macroscopic hysteretic responses. Two distinct states of matter, separated by a potential barrier larger than the thermal energy scale, can be used as a memory encoding mechanism; magnetic hysteresis being the most famous example from physics and the basis for all magnetic information storage media. Memory formation and retention via hysteresis is a non-equilibrium process because the system requires external forcing to get across the energy barrier from one state to the other. Consequently, universal laws and universal exponents which provide adequate theoretical characterization of equilibrium transitions are very difficult to find in non-equilibrium hysteretic processes.

Friction-induced hysteresis as well as memory in amorphous granular media is well known in the context of rock geophysics and engineering, but the mechanism of memory formation, its training, and eventual retention are not yet well understood. Furthermore, the strong protocol dependence and the granular pack's preparation history immediatey dash any hope of observing universal behavior in these systems.

In this project with theory and numerical simulations performed by our collaborators at the Weizmann Institute of Science, Israel and experiments performed by our group at OIST, we focus on memory that is induced by training a frictional granular matter by cyclic loading and unloading. In each such cycle dissipation leads to hysteresis, but with repeated cycles the dissipation diminishes until the system retains memory of an asymptotic loaded state that is not forgotten even under complete unloading. We report and explain a universal power law associated with the reduced dissipation and increase in memory which is expected to hold irrespective of the details of the microscopic interactions.

In compressed frictional amorphous granular media the external pressure is balanced by normal and tangential (frictional) forces acting at the contacts between the grains. The forces are very inhomogeneous, with a wide distribution of magnitude, resuling in the appearance of force chains which represent the largest forces which are percolating from wall to wall.

Intensive discussions of the nature of these inter-particle forces and of their distributions in frictional amorphous media have been taking place for a number of decades, with various proposals for the force probability distributions that follow a variety of functional forms from exponentials to power laws. The intervening years until the present time did not resolve the somewhat confusing status of the probability density functions of the contact forces in frictional matter.

An interesting line of attempts to nail down a solid prediction for these distributions employed the principle of maximum entropy subject to known constraints. In some degree these attempts were motivated by the desire to define an "effective temperature." These attempts were somewhat rigid in following the example of statistical mechanics in trying to use the mean energy or the mean stress as the appropriate constraint (over the normalization) under which the entropy is maximized. Recognizing that the forces between grains are naturally bounded by zero from below, and with the freedom to use any moment of the force distribution that appears appropriate. In this way, we can reap the benefit of the information-theoretic meaning of the maximum entropy principle, providing us with the "least biased" prediction subject to measurable data.

We found that our measurements of the marginal distribution P1 in both experiments and simulations agree very well with the predictions of maximal entropy subject to the mean and variance of the distributions. For the joint distribution P2 one needs to add the correlation function that couples the normal and the tangential forces. In principle one could add additional moments as constraints, but we found the agreement with the data so good that this was deemed unnecessary. To test the predictions of our approach, we measured the normal and tangential forces in frictional granular matter in both experiments and simulations and found excellent agreement with the model.

The Collaborative Experimental Design and Analytics is designed to present students with the matically related research topics in the biological sciences, from organismal to molecular resolution, which represent phenomena that illustrate fundamental principles by combining scientific research presentations, foundational lectures, hands-on data collection and quantitative skills workshops. This one-week intensive course will provide opportunities for students to explore cutting-edge questions in a beautiful campus at Okinawa Institute of Science and Technology Graduate University (OIST), Japan.