This has been a year of big changes in which the main work of the unit is now on human organoids.  Towards year end, only Teresa and Esther were working on slices of mouse brain while the major work was on human brain organoids, 3D cultures developed from human pluripotent stem cells.  These organoids allow us access to human neurons cultured to mimic parts of brain. We have both midbrain-like organoids and striatum-like ones, with which to explore the effects of gene manipulations that mimic Parkinson’s disease.

2.1 Development of the alpha-synuclein aggregates in Parkinsonian brain organoids

3.1 Rotation students, changes in staff and a year of pandemic isolation

I usually start this section by looking back to the rotation students that passed through the laboratory that year. With no exceptions the graduate students share a delightful taste of wonder before moving along to other Units. This year it was Thato’s, Anai’s and Charlotte’s turn, thank you for your enthusiasm.

In comparison to previous years, a recurring departure of unit’s members left a foreseeable sense of renewal. Yoko moved to join the Terenzio Unit and was substituted by Ai, who a few months later, moved to explore different adventures in OIST Imaging Section.

At the end of last year, it became evident that to protect the health of my lungs, I had to work from home. As a result, Teresa departed without the anticipated celebration we had for all those who finished their postdoctoral experience with us; instead of the planned fanfare, her departure turned out to be a sombre distant goodbye via email. Continuing with the Unit’s decamp, Marianela now only works part time and Esther has only a few months left with us before she moves to deliver her expert support in another Unit within OIST.

Remaining in the field of exploring the many experimental questions related to neurodegeneration, is Charlotte who will develop her PhD project in the Optical Neuroimaging Unit under Professor Bernd Kuhn’s direction. She will use midbrain organoids developed from hiPSC to determine the influence of microglia in neurodegeneration. The Unit’s expert team of Jo, Dai, and Jin Seok will guide Charlotte’s desire to use organoids as her experimental model.

Dr. Jo, who is passionate about advancing stem cell technology using hiPSCs for Parkinson’s disease, was integrated with the unit as a part of a general interest of the University in the development of research using this new technical advance.  Dr. Jo obtained his PhD from CHA University in South Korea, known for its world-class reputation in the development of technology related to stem cells, the human genome and reproductive medicine. His postdoctoral training was in the Genome Institute of Singapore (GIS) under Prof. Huck-Hui Ng. Within that group, Junghyun Jo developed a protocol to generate human midbrain-like organoids (hMLOs) from hPSCs to recapitulate features of human midbrain by the 3D culture system (Junghyun Jo, et al. 2016. Midbrain-like Organoids from Human Pluripotent Stem Cells Contain Functional Dopaminergic and Neuromelanin-Producing Neurons. Cell Stem Cell 19(2): 248-257.) Before joining OIST, during his postdoctoral experience, Junghyun Jo had already generated organoids -deficient in the gene encoding the lysosomal enzyme, glucocerebrosidase (GBA1) displayed some similarities with Parkinsonian brains.

As Junghyun Jo joined the Unit, we applied for a big USA grant from Aligning Science Across Parkinson’s, a consortium using the Michel J. Fox organization to arrange funding for Parkinson’s disease. Although we did not get the money, the grant was shortlisted, an honor in such a competitive venue. As a result, we initiated a collaboration with Mark Ellisman and the National Center for Microscopy and Imaging Research group in the University of California San Diego that now, when the end to the pandemic is in sight, we will rekindle.  It is imperative, in the near future, to proceed by looking for the site of development of the alpha-synuclein aggregates that are part of the Lewy Bodies, a pathological marker in Parkinson’s disease brains.

Junghyun Jo redoubled his efforts this year when I left him in charge of developing the project while I was protecting my health. He has already applied for several other sources of money and received a joint grant with CHA University that provided the Unit with another postdoctoral worker Dr. Jin Seok Bang.  He could not arrive before November due to the imposed travel restrictions despite the paperwork being ready since in February. For now Jin Seok replaced Teresa in the unit from January. Importantly, a publication including Dr Jo’s work in Singapore was published this year (Kwak TH, et al, 2020. Generation of homogeneous midbrain organoids with in vivo-like cellular composition facilitates neurotoxin-based Parkinson's disease modeling." Stem Cells 38 (6): 727-740).  He also has a joint Kakenhi grant about to start, and a POC opportunity that might start in December next year.

Of the three rotation students this year, Thato worked with Teresa on dopamine release (Figure 2), Anai worked on the organoids (Figure 3), and Charlotte is still with us beginning her Ph.D. 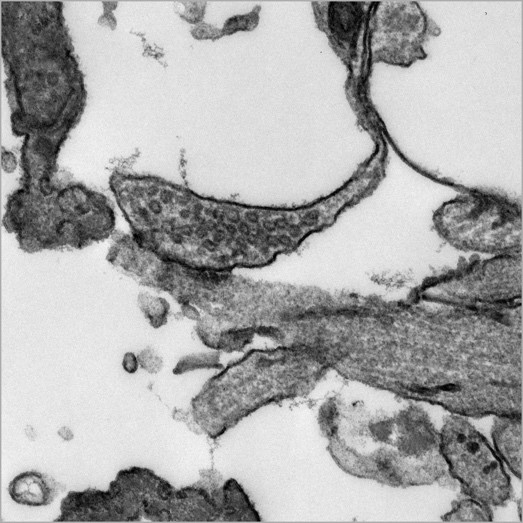 Figure 1. Electron microscopy section obtained from an OIST-generated human organoid, sent to the UCSD National Center for Microscopy and Imaging Research group for processing. It shows a synaptic bouton in the center of a field with space surrounding it.  Extracellular space is rare in brain but present in organoids. This collaboration waiting to be rekindled as soon as possible. 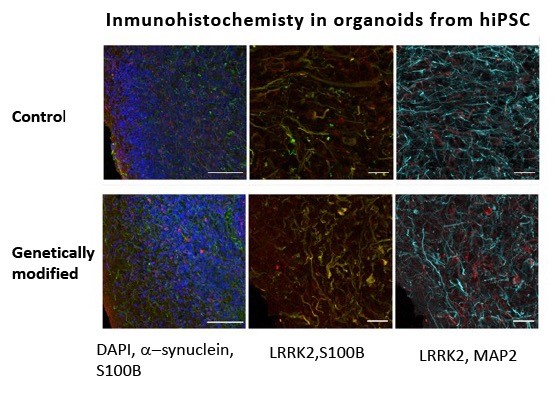 Meanwhile, Esther took on responsibility of examining the electrophysiology in the organoid cells, a job by the way, that I was hoping to do myself before isolation.  She already obtained some records, but some of the neurons are exhibiting immature phenotypes. In conclusion, there is more work to do to make a convincing story out of that part of our research.  Meanwhile, the work she did in the Tokyo Medical and Dental University before joining OIST, is published in iScience.  Publication of her work from her time in the unit is in revision.