Molecular mechanisms of the G0 state

The comprehensive methods of systems biology - genomics, transcriptomics, proteomics and metabolomics - are vital for understanding the complexity of molecular interactions in the cells (Figure 1). We use these methods to screen for initial discoveries, through evaluating the molecular differences between G0 cells and vegetative (dividing) cells. Currently, our efforts mostly focus on genetic screenings, genomics, and metabolomics. Individual genes and metabolites discovered using these comprehensive methods are selected for deeper, individual analyses. 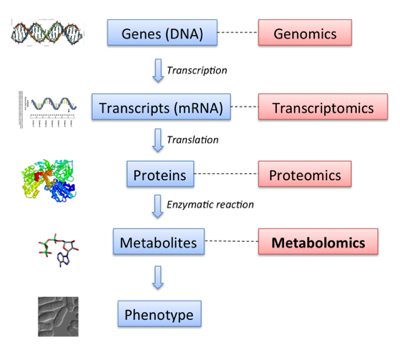 Figure 1. Hiearchy of a living organism and corresponding methods of systems biology

We employ the fission yeast (Schizosaccharomyces pombe) as a model organism. Fission yeast is one of the simplest unicellular eukaryotes, and is well known as a powerful model organism in various areas of cell biology. Its genome has been completely sequenced and a number of genetic mutant strain libraries exist.

The fission yeast shows a remarkable phenotype: when nitrogen source (typically, NH4Cl) is removed from the culture medium, the rod-shape cells become small and round (Figure 3) and enter a quiescent state that can last for months. When nitrogen source is replenished, fission yeast G0 cells re-enter the cell cycle and start proliferating. We use this system as a model of the G0 state and try to identify genes that are required for its function.

Identification of essential genes through mutants

Genes required for the G0 state can be identified by seaching for fission yeast mutants that show defects in the entry to, or maintenance of, G0 state. For example, the proteasome regulatory subunit temperature sensitive mutant mts3-1 (Takeda et al., 2010) suffers from severe oxidative stress in the G0 state, caused by a dysfunction in mitochondrial maintenance.

Another example, the Krüppel-like zinc-finger transcription factor deletion mutant ∆klf1 (Shimanuki et al., 2013) fails to maintain its cell wall structure after several weeks of incubation in the G0 state. This phenotype is accompanied by the accummulation of several metabolites, such as N-acetyl-D-glucosaminate or ergothioneine. 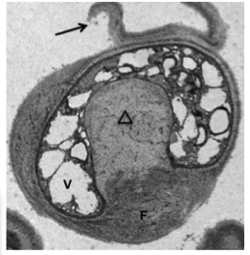 We employ robotics to screen large libraries of fission yeast strains for defects in the G0 state. For non-essential genes, we use a library of ~4,000 deletion strains created by Bioneer, Inc. (Korea). For essential genes, we use a library of ~1,000 conditional (temperature sensitive or ts) strains generated by random mutagenesis (Hayashi et al., 2004). These strains contain point mutations in essential genes. Under permissive temperature (usually 26°C) the strains grow normally, but raising the temperature to 36°C causes a defect in the mutated protein, thus preventing further growth.

Fission yeast cells become small and rounded under nitrogen starvation. We are searching for mutant strains that fail to exhibit normal G0 phenotype, or those that lose viability after prolonged cultivation in nitrogen starvation medium.

The standard synthetic medium for cultivation of fission yeast cells contains 2% glucose (111 mM), approximately 20–30 times higher than that in normal human blood. We found that fission yeast cells can easily grow in a culture medium with a blood-like glucose concentration (4.4 mM; Figure 7; Pluskal et al., 2011). We are now performing a large screening project to identify fission yeast strains that fail to grow under limited glucose.

Figure 7. Fission yeast cells dividing regularly in a culture medium where concentration of glucose was reduced to a level similar to that of human blood (4.4 mM).

One of the crucial mechanisms how fission yeast cells adapt to low glucose environment is by relocating a major glucose transporer Ght5 to the surface of the cell (Figure 8; Saitoh et al., 2014). 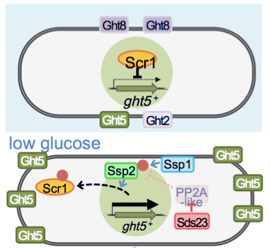 Figure 8. Ght5 is the major hexose transporter in fission yeast. Scr1 is a transcriptional repressor of the ght5+ gene. Ght2 and Ght8 are hexose transporters located at the equators of cells in high glucose medium, while Ght5 locates at the tips of cells in low glucose. Ssp1 and Ssp2 are similar to mammalian CaMKK and AMPK, respectively. Sds23 is the inhibitor of type 2A-like phosphatase.

Through our screening of temperature sensitive mutants, we have identified mutation sites in 86 distinct genes. As these strains are ts in complete medium and lose viability in the quiescent G0 phase, these genes are required for both G0 phase and also vegetative proliferation. Hence, we call them super-housekeeping (SHK) genes. 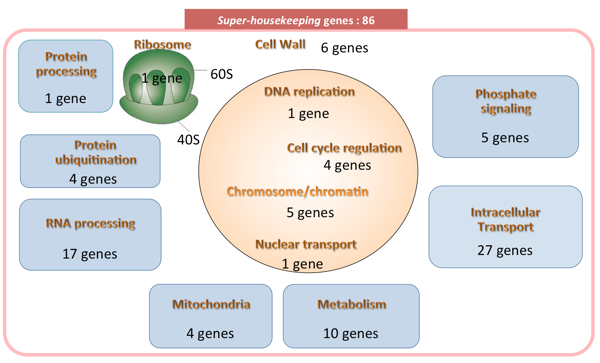