Why do we age? This simple question is still unresolved, while historically several models to explain aging mechanisms have been proposed; Radical theory of aging by Harman in 1956, Calorie restriction by Mckay in 1931, Mitochondrial theory in 1972 etc. In those models, the molecular impact of metabolic shift on longevity is now thought to be a hot topic in the aging research field.

Fission yeast has a short lifespan compared to humans, thus to search for compounds related to aging we use human blood. It is relatively easy to obtain and contains metabolicaly active cellls. In vertebrates, red blood cells (RBCs) deliver oxygen to the tissues and remove carbon dioxide.  In humans, approximately 5 L of blood circulate throughout the entire body every minute.  Approximately a quarter of the cells in the human body are RBCs.  Human RBCs are viable for the relatively long life span of 120 days, despite having no demonstrable protein synthesic nor tri-carboxylic acid cycle activity.  We believe that the blood metabolome (plasma as well as RBCs) reflects the state of the human body in a quantitative and comprehensive way

Metabolomics, a modern branch of chemical biology, provides compositional and quantitative information about the state of an organism or cell at the level of metabolic constituents.  It profiles small molecules present in biological materials in a comprehensive way, and is an important tool for studying metabolic regulation synthetically, in concert with proteomic analyses. 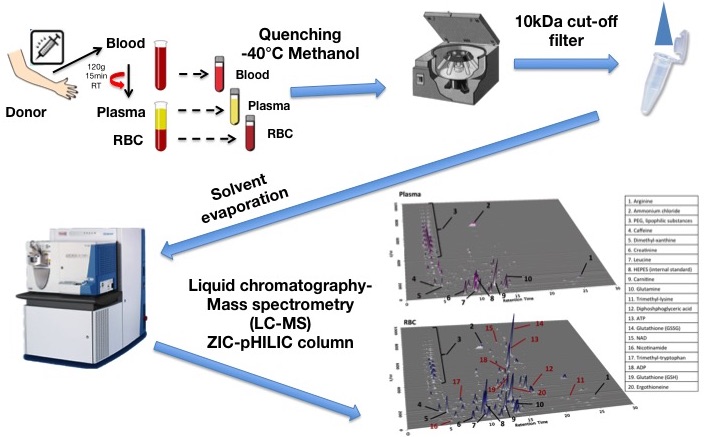 With an intension to improve human health care and to better understand human ageing, we attempt to use human blood metabolomics to identify compounds related to aging and life-style.  We continue to search for novel and less characterized compounds in blood by improving and developing LC-MS protocols as well as obtaining blood samples from different human populations. Combining these data with fission yeast metabolomic screening could provide novel insight in basic biology and, with a bit of luck, contribute to the solution of the aging society problem (Fig. 3)