Cognitive science and philosophy of mind are articulated around two fundamental questions: What allows an agent to make sense of its environment? And how does it do it? Both questions imply a normative dimension. On the one hand, making sense of the environment implies being able to differentiate the relevant from the irrelevant, the convenient from the inconvenient, etc., and acting accordingly. This means that being a cognitive agent implies having a normative point of view that guides its behavior and from which aspects of the environment are discriminated according to the agent’s own purposes. On the other hand, an agent can fail in its cognitive processes, whether it realizes it or not. This implies that cognitive processes and activities are subjected to external and public normative criteria that potentially allow others to determine whether the agent failed or succeeded. This does not mean that others have to actually evaluate the agent’s performance or that these criteria determine the agent’s behavior as laws of nature do. Instead, external criteria must establish conditions of success and failure that go beyond the agent’s own impressions. These two dimensions capture two essential features of cognition: agents are not indifferent to their environments but have a normative point of view that guides their behavior, and such behavior can succeed or fail (Mojica, 2020).

Any naturalistic account of the mind should explain how normative behavior with the two dimensions identified above arises in nature. This project articulates and critically examines the explanations offered within the enactive embodied tradition. One of the accounts defended in the literature is proposed by the enactive approach to cognition, whose historical roots are the autopoietic theory. For enactivism, agents autonomously establish a point of view of their environment and are motivated to act in terms of what contributes or threatens their identity. Agents’ identities comprise a metabolic/biological dimension, a sensorimotor dimension, and, in the case of humans, a sociocultural dimension (Di Paolo, Buhrmann, & Barandiaran, 2017). According to this approach, a normative point of view arises from the very constitution of the living organism, and their cognitive behavior is defined as the interactions that the agent selects to counteract the tendencies that threaten its autonomous identity (Barrett, 2017, 2019; Weber & Varela, 2002; Barandiaran, Di Paolo, & Rohde, 2009; Barandiaran & Egbert, 2014). In contrast, radical enactivism and teleological approaches to mental representations and content defend that selection over the evolutionary scale is the fundamental source of normativity. Under this kind of accounts, external normative criteria are established by the features and behaviors selected in the history of the species or in the history of the shared form of life of human communities that the agent belongs to (Hutto & Myin, 2013; Millikan, 2020).

There is a crucial point of agreement between accounts of normativity centered on the autonomous identity of agents and accounts centered in selection over history: both define normativity in terms of the practical possibilities and consequences that agents’ selected behavior has in the individual or evolutionary scales for themselves or their species. Despite the similarities and potential complementariness of both accounts, there is no unified conception of normativity that yields itself to naturalization, let alone an in-depth examination of the ontological consequences for nature that these proposals of naturalization of normativity have.

The project’s structure is the following: First, a conception of cognitive normativity is needed; a conception that yields itself to be naturalized and includes both basic minimal forms of cognition and more complex ones. A working hypothesis in this respect is that a pragmatic conception of normativity allows us to understand both minimal and complex forms of cognition as natural phenomena that form a continuum and that, despite being realized in different ways in different living creatures, share the common features of being the realization of an intrinsic purpose as well as being subjected to fail or succeed. This account of normativity sets the conditions that a project of naturalization of normativity in cognitive science should meet. Second, the available naturalistic accounts of cognitive normativity are examined following the criteria set in the first part. Enactivism explains how a normative point of view and external normative criteria arise simultaneously with the constitution of a living organism. However, it does not explain how these two dimensions of normativity can disentangle as it is characteristic of cognition. Accounts focused on evolution such as radical enactivism and teleosemantics can account for the separation between these dimensions: evolutionary history sets the external normative criteria that make a specific individual behavior right or wrong. Ecological psychology has the potential of synthesizing both the enactive and evolutionary accounts of normativity. According to the ecological approach, agents perceive the world as possibilities for action, and these possibilities are established by the skills shared by the species and the form of life the agent belongs to (Rietveld, 2008; Rietveld & Kiverstein, 2014). Ecological accounts of cognition can build together a strong naturalistic account of normativity that brings together enactive and evolutionary accounts of normativity and meets the criteria set in the first part of the project. However, they require that nature allows selection in different time scales, individual and evolutionary, which in turn requires that nature is not completely deterministic. The last step of this project examines this consequence that pushes nature towards under-determinism and explores some options in science that could accommodate the ontology that is needed. 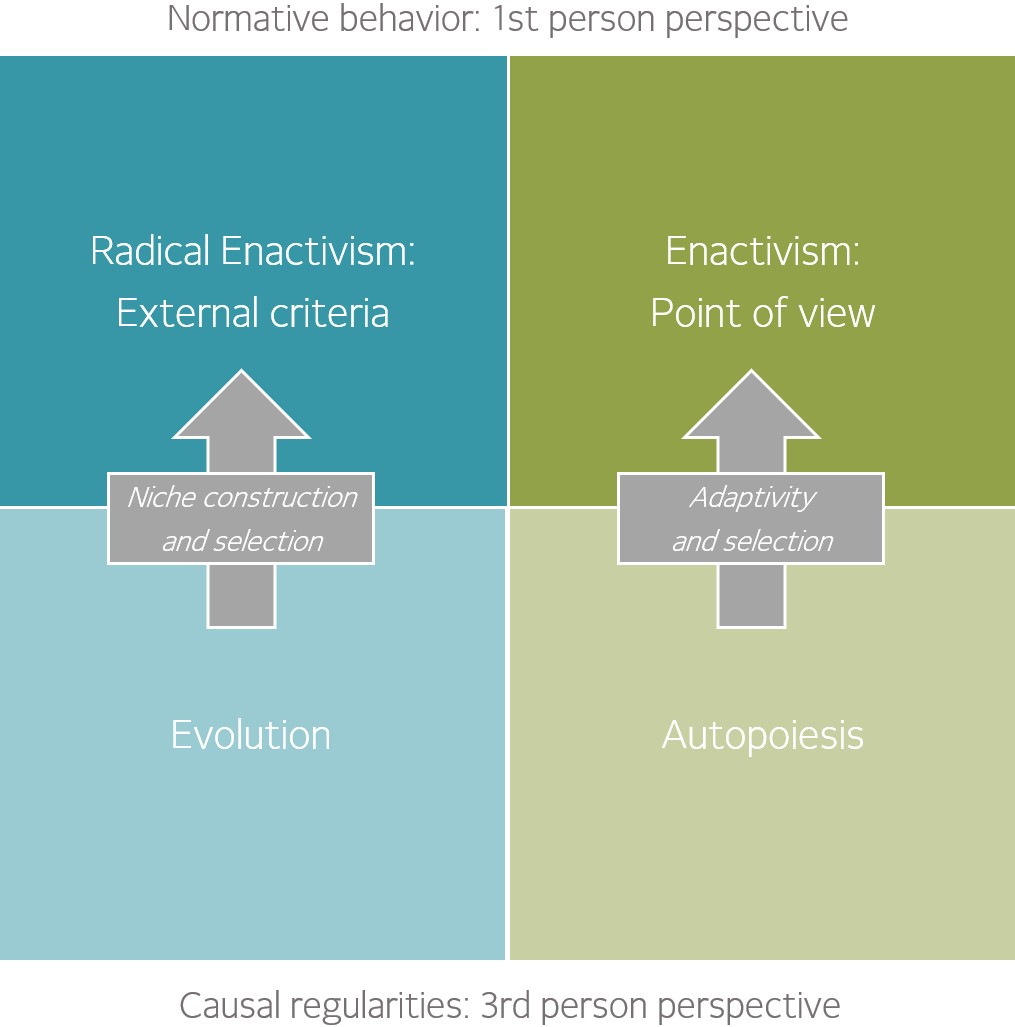